Tashkeel: An Oasis for Artists in Dubai 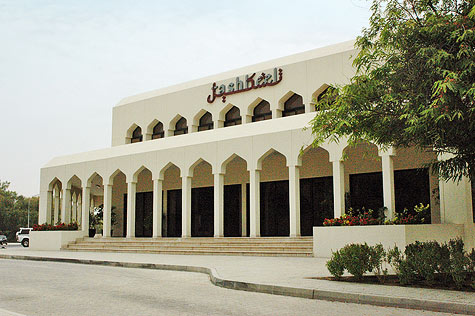 The reports reaching us from Dubai, so well known for its striving for superlatives, create the impression that its cultural sector’s attention is focused primarily on consuming art, rather than on the preconditions for producing art. Talk is almost always solely about the planned gigantic cultural district (what are the museums to be filled with, anyway?), the galleries sprouting like mushrooms, the art fairs, and the promising art market.

Among the few institutions doing its best to improve working conditions for artists in Dubai is the art center Tashkeel, which opened in January 2008. In an e-mail interview, we were able to ask Lateefa bint Maktoum, founder and director, and Jill Hoyle, manager, a few questions about Tashkeel’s concept and work:

Haupt & Binder: What triggered the idea to establish Tashkeel, what is the concept behind it, and what goals would you like to achieve?

Lateefa bint Maktoum & Jill Hoyle: The idea to create a studio such as Tashkeel emerged from our interaction with artists living and working locally who needed specialist facilities to produce their art but had no access to them. At Tashkeel, our goal is to support and encourage artists and designers of all ages and nationalities who live and work in the region. We aim to achieve this through the provision of studio and workshop facilities, through exhibitions in the gallery highlighting work produced locally, and by encouraging cross-cultural dialogue through the interaction of artists in the communal studios and through the development of an artist exchange and residency program.

H&B: What does the name mean, and in which metaphorical sense was it chosen?

LM & JH: The name "Tashkeel" is derived from the word fen-tashkeely, which is the Arabic for fine art. Tashkeel also means "variety", shown throughout the studios (the variety of different mediums utilized). Coincidentally, tashkeel is also used to describe the dots on the Arabic letters, which reflects Tashkeel’s function of defining the detail in the work of its member artists.

H&B: What organizational structure does it have, and what facilities and benefits does it offer to the artists?

LM & JH: Tashkeel functions like an association. The benefit of being a member of Tashkeel is that we offer our members the use of specialist facilities, such as painting, printmaking and textile printing studios, a photo studio and darkroom, and a Mac computer studio equipped with the latest creative software and large format digital printing. These kinds of specialist facilities are not available for public use under one roof anywhere else in Dubai. Another great benefit is that because Tashkeel has communal working studios, the space also serves as an artists community, where up-and-coming artists can interact with established artists and designers, working side by side in the studios and benefiting from this experience.

H&B: Can artists from overseas get involved?

LM & JH: One of Tashkeel’s goals is to create a cross-cultural dialog between artists through the arts. A long-term plan of Tashkeel is to create an artist in residency program, in which Tashkeel will offer artists from abroad residency for a period of three to six months, during which time the artist will give a series of workshops to our members as well as creating his or her own works in the Tashkeel studios. In this way the artist will benefit from interacting with the local artist community and Tashkeel members will benefit from the expertise and experience of the resident artist.

With sponsorship from the Chalhoub Group in Dubai, we have already hosted a trial for this kind of residency earlier this year with two artist exchanges, each lasting for just one week. The first residency was in partnership with Emerson Gallery, Berlin, supported by the Goethe Institute in the Gulf, and the second was with the Volume Foundation in Rome. In these exchanges, 4 artists from the UAE went to Rome and another 4 to Berlin and we received four artists from each of these organizations in the Tashkeel studios. The residencies ended with an exhibition of work in each of the galleries. Although short, they revealed the need for more of these kinds of residencies in the future.

H&B: Dubai's art scene is changing overwhelmingly fast, but for many observers there is a fear that the direction in which it is moving serves first and foremost the art market and the property and tourism industry. How do you see the contribution of Tashkeel to the development of the art scene in Dubai?

LM & JH: At Tashkeel we are involved greatly in the process of creation. Unlike the fast pace of the art market, where the goal is to buy and sell art, we are more interested in encouraging the dialog behind the art and the conversations and education that emerges from it.

H&B: Looking back on its first 8 months of existence, what activities and fields of emphasis proved successful and which new priorities evolved from this experience?

LM & JH: In the first eight months of existence, we realized that there is a need and a desire for workshops. The pilot scheme of workshops that we ran attracted many young artists, most of whom were art and design students in their final years of university. These students wanted to learn new skills, such as textile printing, that they may not have had a chance to learn at the university. We realize that we need to develop a more expansive range of workshops in the future, both on beginner and master class levels.

The gallery was also not an essential part of Tashkeel’s plan at the beginning, but emerged as an afterthought. However, it has now become an essential and integral part of all of Tashkeel’s activities, each exhibition opening attracting more people to Tashkeel and bringing in new members. We recognize the need to develop a longer-term strategy for our exhibition program and to balance exhibitions of established artists with group shows of members’ work.

H&B: How would you ideally like to imagine Dubai's art scene in five years from now?

LM & JH: We would hope to see galleries and museums emerge showing art created locally, not only by the native people of the region but also by the people living and working in the region. Dubai is such a cosmopolitan place with so many different views on life that it will be interesting to see what is the voice of the home-grown artists. Hopefully, we will eventually see the emergence of galleries with permanent collections and exhibitions of this art.