His "D Series" explores the boundaries between landscape photography and self-portraiture. 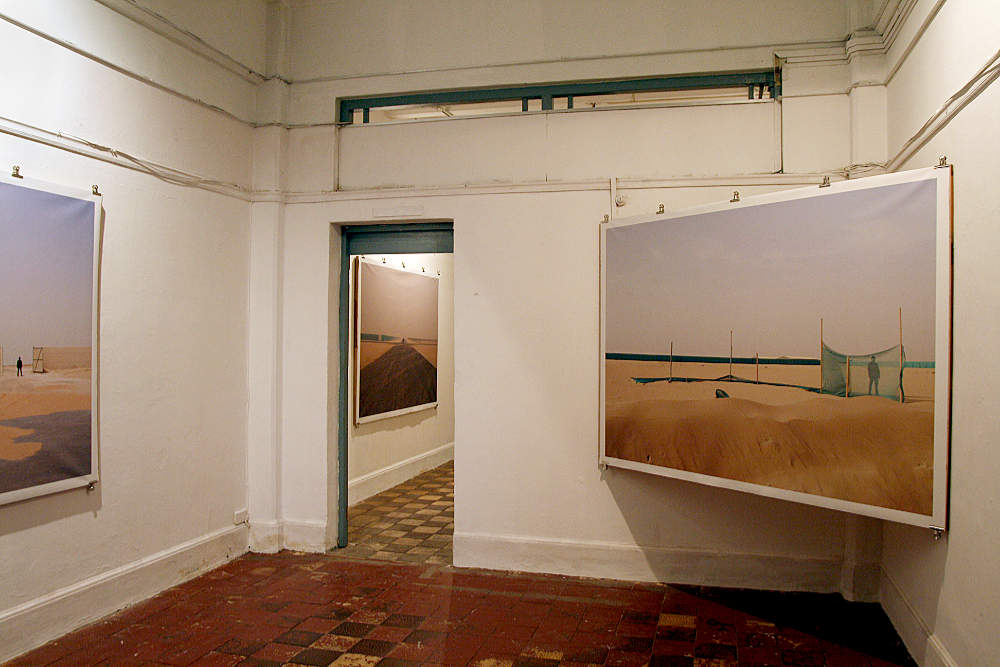 Images from Tarek Al-Ghoussein’s D Series shown at the Singapore Biennial 2008 explore the boundaries between landscape photography and self-portraiture. In contrast to the earlier Self Portraits series in which Al-Ghoussein performs a re-presentation of stereotypes, the D Series presents a narrative that is seemingly freed from the responsibility of representing a struggle for self-definition. With regard to the portrayal of the landscape, the intent is not to document an existing condition but to exploit the potential of a particular location to establish a reciprocal relationship between context and figure.

The walls and the figures that are prominent in all of Al-Ghoussein’s work remain; however, as a result of the way in which they have been used to structure the composition, the walls in the D Series are employed as devices to create moments of visual tension through a dialogue with the figure. When compared with earlier work, we see that the figure in the D Series has decreased in scale relative to the image as a whole, which allows for opportunities to consider the formal structure of the photographs. For example, when a figure is reclining the images tend toward equilibrium due to approximate symmetry and the fact that the figures are fully contained within the space created by the walls. In the cases where vertical figures do not occupy the center of the composition, they often demand attention because of their relation to the walls. These subtle gestures not only emphasize the figure within each individual image, they also establish visual and thematic continuity throughout the D Series.

Another important aspect of the images is the ephemeral nature of the materials, as evidenced in the transformation through factors such as wind or weathering of surfaces. The natural and constructed landscape appears fleeting and temporary. The D Series presents more or less defined spaces that never seem to result in a place that could be described as accommodating – space has been made, but not made fit for habitation. At the risk of oversimplification, one can make comparisons between the spaces in Giorgio de Chirico’s paintings, particularly those portrayed in the Delights of the Poet; but, while de Chirico at least allows for the promise of protection afforded by a surreally scaled arcade, the spaces presented in the D Series are unrelenting and unfit for occupation.

Al-Ghoussein has spoken about the notion of transience, and images from the D Series shown at the Singapore Biennial 2008 manifest the ideas that have been central to his recent work. The nature of the found structures, the spaces they create, and the careful consideration of the relation between figure, space and frame combine to result in an aura of ephemerality. We are also made aware of the effects of time through the changes in light quality and degradation of the structures as traced through the series.

While the images in the D Series imply vast open spaces, there is a palpable sense of placelessness and melancholia. The photographs inspire recollection of a line from Noël Arnaud’s L’état d’ébauche, "I am the space where I am". The scenario structured by the images in the D Series allows Al-Ghoussein to explore themes that are vital to his work and, perhaps more importantly, because the series transcends a personal struggle for self-definition we are all encouraged to reconsider our own relationship to the spaces where we are.

Associate Professor of Architecture, and Director of Graduate and Undergraduate Programs at the American University of Sharjah, UAE.