Tales around the Pavement

The project explores the complex relationships and dynamics between people and public space in Cairo. 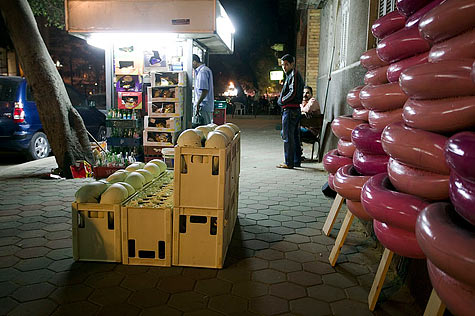 Tales around the Pavement is a multi-staged contemporary arts project that explores the complex relationships and shifting dynamics between people and public space in the context of a mega city like Cairo, in which the notion of public space and its various functions, official and informal, is constantly negotiated and redefined.

The first chapter of the project was launched during the Cairo Unclassified edition of Meeting Points 5 (MP5), a regional contemporary arts festival organized by the Young Arab Theatre Fund in November 2007. Staged in the streets of Downtown Cairo, seven local artists, designers and architects produced new low-budget site and context-specific projects that takes an investigative research-based approach to the daily habits of people. Two of the seven works from Chapter One have taken the form of public furniture. The rest of the projects include a portable sound installation, a TV-based public situation, a street graphics project, a series of pictograms, and an interactive installation in an abandoned kiosk. Some of these lasted over the span of a week or more, but most have been ephemeral disruptions of the urban landscape. With these projects, the artists have effectively reinvented some of the guerrilla-style tactics and survival strategies employed by city dwellers on a daily basis in the public arena.

In Tales around the Pavement: Chapter Two, a similar set of questions and issues pertaining to public spaces in mega cities today from Istanbul to Mumbai were examined by an international group of artists, photographers, writers, curators and filmmakers. This chapter was presented within the framework of a visual arts show in the classical exhibition space of the Contemporary Image Collective as well as a parallel public program of presentations, lectures, films screenings and roundtable discussions.

The eight works presented in the visual arts exhibition include one project that has been reworked from Chapter One (Mohamed Allam), three newly commissioned works (Mahmoud Khaled, Katarina Šević, Tarek Hefny), three existing works that have been previously shown in other contexts (Hany Rashed, Osman Bozkurt, Randa Shaath) and one work that has been produced individually but has not yet been exhibited (Jean-Luc Marchina). Making use of a diverse range media and approaches, from single channel low-tech videos, sound installations to black and white documentary photographs, these cultural producers collectively spin a web of stories that is as multi-layered as the city itself.

In both chapters various concepts of property, privacy, ownership, class, marginalized sub-cultures and gated communities were explored within the narratives presented in the projects and program.

The seven projects commissioned for the first chapter of Tales around the Pavement are the focal point of an eponymous new publication. With photographic images, illustrations, texts, notes and conversations, this publication seeks to track some of the experiences of producing a series of transient interventions in public spaces in Downtown Cairo.

Tales around the Pavement

The CIC's website provides the program of events related to this project.