Patience is Beautiful: Multi-layered drawings with embroidery, and mashrabiya screens with texts. 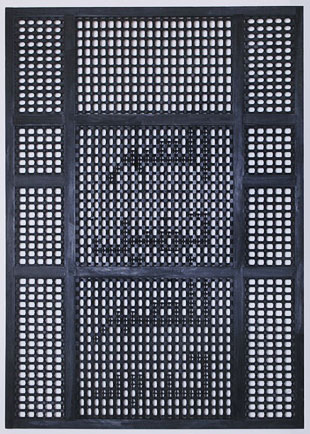 Hefuna is attracted to the abstract form of structures, both organic structures such as molecules, DNA or modules, and architectural structures such as cityscapes and mashrabiyas (the carved wooden screens found in many historical houses in Cairo and around the Middle East.)

When her early drawings were exhibited in Germany and Cairo in the early 1990s, Hefuna was surprised, and later influenced, by the very different responses that they elicited. In Germany the drawings were interpreted primarily as abstract art. However, in Egypt audiences immediately recognised the familiar form of the mashrabiya. Hefuna realised that the reading of her work depended not just on the work itself, but also on the context in which it was exhibited - that "there is not one truth, but layers of interpretations or perceptions".

Subsequent drawings, installations and photographs have continued to use the metaphor of the mashrabiya to play on the notion of what is hidden and what is seen. Mashrabiyas traditionally protected the inside world from the outside world; filtering the light and allowing one to observe without being seen. The mashrabiya creates separation – inside from outside, women from men, family from outsider, haram from hallal. Traditionally, the mashrabiya only allowed one-way vision – from inside to out, but Hefuna has incorporated words into her mashrabiya sculptures, which, significantly allow the viewer to read from both sides. "The mashrabiya became for me a symbol that operates in two directions with the possibility for dialogue, rather than closure."

The sculptures incorporate words in Arabic, English and German – Patience is Beautiful, Smile, Enta Omri (You are my life). Interpretation depends not only on understanding the language in which the words are written but also on which side of the screen the viewer is standing. From the back, the text is reversed and difficult to decipher.

By incorporating text in a foreign language into the traditionally Arabic mashrabiya, Hefuna not only creates the possibility for dialogue but also introduces an uncomfortable element into a protective domestic device. Even in the comfort of home, one can still feel like a foreigner. Fracture is inherent in every identity. By literally translating commonplace Arabic phrases such as Patience is Beautiful, Hefuna draws on personal experience of meaning being lost in translation. Like the metaphor of the mashrabiya, there is always something in-between. In Hefuna’s words, "Most human beings are not able to see the world without a screen of social and cultural projections."

From a distance, the text in Hefuna’s mashrabiya sculptures is easily decipherable. From close-up, it becomes difficult to read. Home is always distant and idealised by the promise of return. In reality, the details never quite match up to expectations. Despite spending many years in both Egypt and Germany, Hefuna has commented, "A feeling of constantly observing, wherever I live or belong, permeates my work".

Hefuna’s multi-layered drawings, which also feature in her upcoming exhibition at the Albion, are hand rendered on several sheets of tracing paper, giving them an almost 3D appearance. Recently, she has introduced embroidered text into her drawings, sewing together the layers of tracing paper. In one drawing, the word ATTENTION is embroidered across the surface. In some areas, puncture marks appear in the paper where the thread has been unpicked. The text is not always easy to decipher. It could for example be read as AT TENSION. The layering and ambiguity of the drawings opens them up to many different interpretations, depending on perception – from Modernist grids to mashrabiyas to cityscapes – even to social and political commentaries. The barely-legible text and the puncture marks hint at fractures in identities and hidden meanings.

Susan Hefuna is in many ways the epitome of a truly 'globalised' artist living in a ‘globalized’ world. City based, and living between Germany and Egypt, she spends much of her life in transit, working ‘on the road’ rather from the traditional artist’s studio. Both the artist and her work have been extensively written about in terms of multiculturalism and cross-cultural communication but, refreshingly, rather than jumping on the bandwagon, Hefuna has chosen to approach her own heritage as more or less an image to be inspected, consumed and commented upon. Far from having either universal or intrinsic appeal, responses to her work have consistently shown that, unlike Hefuna, interpretation remains stubbornly local, and ultimately personal.

Curator, writer, and photographer, specialised in contemporary art from the Middle East. Worked at the Asia House in London, before joining Rose Issa at Beyond Arts Productions.