The Past - The Forgotten Time

About the touring exhibition's critical approach to Indonesian history and the audience's response. 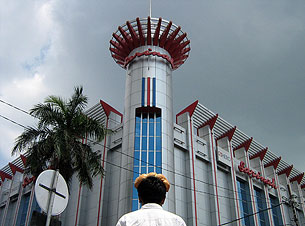 Wimo Ambala Bayang walks around the Sarinah shopping center with bread on the top of his head. People curiously look at him. Then, as his walk ends outside the building, he gives the bread to a

becak driver about his memory of the Sarinah shopping center. In turn, the

becak driver invites a friend to join in the conversation. This friend says that 'Sarinah' is actually an acronym for "Siapa Anti Republik Indonesia Niscaya Akan Hancur" (those who are against the Republic of Indonesia will necessarily crumble).

Wimo's video work called "Once Upon A Time in Malang (Jongos)" provides an interesting illustration of the relationship between history and contemporary daily life. Wittily, Wimo employs bread (representing "West") as the metaphor in offering his finding regarding the "cultural policy" in the colonial period of forbidding native servants to position the food they serve below their mouths lest their breath will pollute, poison the food. In the moving visual imagery, Wimo creates a space where the past and the present, the young and the old, the construction of memory and the inclination to forget meet.

"The Past - The Forgotten Time" is the title of a long-term exhibition project by Cemeti Art House from 2006 through 2008. This project started with our intention to reconsider history that has for long been a tool in the hands of ruling regimes that often make us feel powerless regarding our collective memory, especially when it comes to deal with the so-called "nation". For this particular purpose of "The Past - The Forgotten Time" touring-exhibition project, we have worked together with researchers from the Department of History at the Faculty of Cultural Sciences of Gadjah Mada University in Yogyakarta. The idea was asking artists to make works based on the findings of a research on the theme of "The Forming of Cities in Indonesia, 1930 - 1960". We invited six artists to take part: Agus Suwage, Eko Nugroho, Irwan Ahmett, Prilla Tania, Wimo Ambala Bayang and Yuli Prayitno.

What interests me regarding the creation process are the ways scholarly texts were interpreted by artists as expressed in the forms of visual images they create. The participating artists enriched and enlivened the data of the historical research with new interpretations and metaphors; by so doing, they expanded the discussion on the historical data and increased their relevance to current situations. The research text then inspired the artists to physically revisit certain historical sites (Irwan Ahmett went to Cirebon to see the present situation of Rumah Makan Bandung [Bandung Restaurant]), mining stories that remain unwritten by the researchers. Eko Nugroho created a metaphor of the snake-headed goat for the hybrid condition Indonesians were entering soon after the independence. Around the goat he set twenty crown-shaped objects as the metaphors for colonial rule. Prilla Tania created a video from her father personal collection of family photographs, to show how the common people take part in the process of documenting history. Agus Suwage's painting is a representation of the role Yogyakarta's King (Sultan) as a national hero as well as the beloved leader in the heart of his people. Yuli Prayitno's installation is a reflection on the impact of modernization on Indonesian women, using high heel shoes as a symbol. The written texts of the research then saw their essence transform to visual subjects.

From City to City, One Country to Another

In the Netherlands, as told by Mella Jaarsma who curates the exhibition with me, she was involved in heated arguments with a senior Dutch journalist as well as some other people at the screening of Wimo's video. The senior journalist questioned the validity of Wimo's reference to the prohibition of carrying food to serve below the native servant's mouth. The journalist said that there was never such a prohibition during the Dutch rule in Indonesia.

In Yogyakarta, April 2007, everyday, we received a group of history students asking detailed questions about the artists' works. I sensed that — perhaps because of their academic backgrounds, they were desperate for some definite and valid confirmation of their interpretations — there was a sort of fear among them to freely interpret the works. I often made this offer: rather than explaining the significations of each of the works according to me perhaps it would be better if the students just tell their interpretations to begin our discussion. Anyway, it was not easy to encourage them to take such offer. The world of art seemed to be so distant from their life that they found it hard to comprehend it.

In Jakarta, the exhibition took place at Erasmus Huis, September 2007. On the opening night, a great part of the audience was of the generation born in the early period of independence, and some even had the experience of living in the Dutch colonial era.

The exhibition in Semarang is among the most interesting ones in terms of audience's response. Semarang audience was more interested in the artists' creation process, especially concerning the ways the artists picked their symbols and then made works out of them.

The exhibition in China took place at an alternative venue in Shanghai, BizArt. In addition to their being too well acquainted with commercial exhibitions or art events, the Shanghai art public has more exposure to mainstream artists. The focus of the discourse on the history of colonialism in Indonesia and its relevance to the formation of Indonesian identity is not familiar to the art public of Shanghai. But I think here just lies the high value of the exhibition: it discloses a previously unknown realm for the world to see, thus encouraging attempts to read "the other".

I sensed that every time I brought the exhibition to a new place, and to meet with a new audience, its layers of signification got enriched. There were always new significations and interpretations growing in discussions and conversations involving me as a co-curator, the artists and the ever-varying audiences. Most of the audience in a given place would always be "puzzled" in trying to connect the visual metaphors with the fragments of the research text as provided in the exhibition catalog. Fundamental questions on the reasons to choose certain symbols, for instance, urged the artists to ponder further on the significations of symbols and icons and the ways that they could help them to get connected with the audience, rather than letting the symbols emerge arbitrarily. This kind of exhibition evokes and expresses individual memory, provides space for personal interpretations, and the social contexts of this kind of sharing, offer wider meanings in living together.

Curator, researcher, and writer, with special interest in cultural studies. Based in Yogyakarta, Indonesia.

The Past - The Forgotten Time