One of Iran’s most inspiring artists, whose distinguished career has spanned more than five decades. 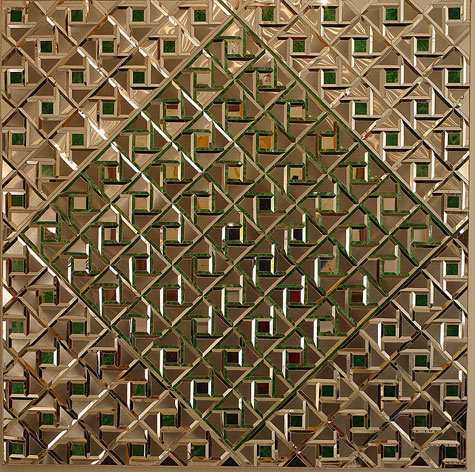 At the age of 84, Monir Shahroudy Farmanfarmaian is witnessing a glittering revival as one of Iran’s most inspiring and innovative living artists. She enjoyed her first comeback shows after almost thirty years at the Victoria and Albert Museum in London and the Niyavaran Cultural Centre in Tehran in 2006, followed by the Third Line gallery in Dubai in 2007. On 18 June, a major solo exhibition of her work opens at the Leighton House Museum in London.

Farmanfarmaian’s art is deeply rooted in Iranian culture and tradition, both in form and spirit, despite her formal training in New York at the Parsons School of Art and Design and her 12 years spent there as a freelance designer for Vogue, and as a commercial and fashion designer for the department store Bonwit Teller. Now back in Tehran, she displays, in her recent work, a wildly energetic productivity that defies the horizon of a lifetime now in its eighth decade.

In two of her most recent works - Recollections 1 and 2 (2008) - Monir (as she often signs herself) incorporates reverse-glass painting and some fragments of Qajar painting in her modernist mirrorworks. Like much of her work, Recollections 1 and 2 -as the titles suggest- somehow reflect her life. Despite having to adapt to many changes in circumstance, she has always managed to hold on to fragments of her past, salvaging precious remains from times gone by.

During the 1960s and 70s, in what have been described as her ‘golden years of creativity’, Monir worked tirelessly in her studio in Tehran where she experimented and refined her unique style. Under the influence of the vernacular architecture that she encountered in Iran, her work was transformed by a new experience: adapting and combining the age-old techniques of reverse-glass painting, mirror mosaics, “Khatam kari” (inlaid marquetry), Islamic geometry and architectural designs.

A uniquely Iranian decorative form, mirror mosaics (aineh-kari) had been used for centuries as interior ornament in shrines and palaces. Monir immediately appreciated the originality and skill of the master craftsmen who created them. She started experimenting with fresh ways of testing new forms, materials and colours and explored the Sufi symbolism of the mirror: a reflection of the self, mirror is also associated with purity, brightness, symmetry, veracity and fortune.

During this time, Monir also travelled widely in Iran, building up unique collections of the arts and crafts of nomadic tribes, coffee house paintings and reverse glass paintings, all of which were, at the time, seen as unconventional and largely unfashionable items to collect. The collections were confiscated during the Islamic Revolution (1979), along with her own artworks and everything else she owned. She became an exile with her family in New York, where she lived with her husband until her return to Iran in 2003, some years after his death.

After returning to Iran, she was both encouraged to recreate some of her lost work and inspired to create new work. Unwilling to copy herself, she warmed up with abstract and drip paintings on glass, adding glitter and mirror mosaics to rediscover the geometrical patterns that she had begun to explore in the 1960s.

In Reflections 1, the reverse glass painting fragments that she incorporates among the mirror mosaics are details of flowers. Pen and ink drawings of flowers have been a constant practice through out Monir’s life and she once spent many happy years creating a beautiful garden out of the bare earth around her (now confiscated) home in Tehran.

The Qajar painting fragments in Reflections 2 evoke an Iran of the past- the Qajar era- which ended in 1925, a year after Monir was born. Like many of her compatriots, Monir’s life has been largely influenced by the rise and fall of different political regimes in Iran. Fragments of past regimes, along with more personal and intimate memories, are stored somewhere in her memory, eventually, if they endure, becoming immortalised in a work of art.

The mirror mosaics reflect many fragments of the world around them, assembling a constructed identity, a life composed of memories, individually disjointed, but beautiful in their overall effect, held in balance by the act of composition. Monir’s compositions, while externally bound and limited, open inwardly to the infinite, underlining the timeless and infinite quality of Islamic geometric concepts.

Monir has a command of a visual vocabulary that many would envy. She relies on instinct and intuition rather than theory, and her recent work is the result of a lifetime’s learning and experience.
Like Louise Bourgeois, who has only been fully recognised late in life, the evolution of Monir’s powerful and original vision over the past four decades will radiate for years to come, and leave its impact on subsequent generations of artists.

Curator, writer, and photographer, specialised in contemporary art from the Middle East. Worked at the Asia House in London, before joining Rose Issa at Beyond Arts Productions.

Part of the program:
"Here We Are"
A series of exhibitions by artists from the Middle East and North Africa curated by Rose Issa 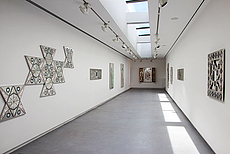