Running Against a Tide of Violence

The Israeli-Palestinian conflict & the Lebanese Civil War. An exhibition at the Centre Pompidou, Paris. 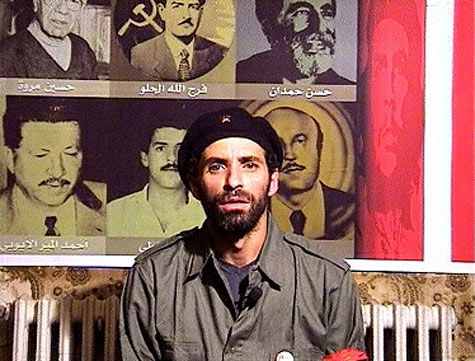 Fists brandished angrily in the air, blood-drenched bodies lifted high, homes and businesses destroyed. Images from the heart of the Middle East, a region our collective consciousness has grown unable to disassociate from bloodshed and violence. In a place where every stone has a history — and a contested one at that — Palestinian, Israeli and Lebanese artists confront our prejudices, challenging us to look just a little bit farther.

At the Centre Georges Pompidou in Paris, five young artists unleash highly subjective and personal approaches to address their shared links to the seminal Israeli-Palestinian conflict and the Lebanese Civil War. With no end in sight to the decades-old violence, where peace is as elusive as objectivity, subjective methods bring us closer to realities on the ground.

In Three Posters (2003), Rabih Mroué reconstitutes a martyr's video testimony using footage from the 1980s of the Lebanese Civil War found in the communist party’s offices. Mroué, 41, questions the exploitation of martyrdom as an ideal by successive ideologies—from leftist to Islamist. Ahlam Shibli, 38, reconstitutes the history of her native Palestinian village, al-Shibli, through a series of photographs that reveal a history fraught with uncertainty, as most of the original inhabitants fled following the 1948 war.

In Tabiaah Samitah (Nature Morte, 2007), Beirut-based Akram Zaatari explores a former Lebanese resistant's re-appropriation of his identity as a soldier as he slowly and silently dons his uniform. Mohammad Abu Hammane, a former member of the Lebanese resistance, appears beside a younger man (Ghayth el Amine) in an 11-minute short film created especially for the exhibition. Although Abu Hammane leaves with a weapon on his shoulder at the end of the video, his younger colleague decides to stay, likely to carry out the implicit military operation. Zaatari, 42, shot the video in the Lebanese village of Hubbariyeh in South Lebanon, where the fedayeen [1] kept a stronghold in the late 1960s, close to the disputed Shebaa Farms territory.

The inextricability of militarized politics with daily life comes to the fore in Yael Bartana’s Low Relief II (2004). Evoking relief sculpture in its flattened quality, the four-part video installation reflects on the history of Bartana’s native Israel through moving and still images. Bartana, 38, digitally manipulates images of figures moving across the screens so that they resemble a military formation. The mystery remains whether these men and women march in the name of peace or in the name of war, thus encompassing the inescapable, mesmerizing duality: Can there be peace without war? Can there be war without peace?

The sheer number of soldiers and police lining Jerusalem’s streets grimly recalls that for many, peace comes at the price of military action. This seeming contradiction also owes to combining documentary footage of peace protests of Palestinian and Israeli demonstrators, military escorts monitoring the situation and of blimps filming the protests overhead, for no movement escapes the eye of CCTV cameras in Israel. Through such rituals — military, political, religious, consumerist — the human body escapes private control and becomes a public and politicized one. In Bartana’s hands, sound and image escape their original purpose and become an element of artifice.

Bartana, along with the other artists presented here, stimulates our senses in order to bring the ramifications of the conflict a little bit closer to home. But between the passive spectator and the active participant, countless degrees of separation remain. In Casting (2007), Omer Fast encourages the audience to confront this distance.

Fast, born in 1972 in Israel and based in Berlin, seamlessly blends the storylines of two tragic events as recounted by a US Army sergeant — a date gone awry with a German girlfriend and the accidental shooting of an Iraqi civilian. Casting straddles the line between truth and fiction, one often blurred by the repeat broadcast of televised images of war. Yes, war is a spectacle, Fast seems to suggest.

On one side of the pair of screens hanging in a blacked-out room, Fast (the interviewer) appears on a screen next to the Iraq veteran (the interviewee) on the other screen, in footage taken during an interview at a US Army base in Texas. The flip side shows footage of the shooting and of the soldier and his date. Here, where actors are made to play out the scenes described while striking melodramatic poses in silent tableaux. At times, Fast pulls back the curtain of spectacle to show the actors — still immobile — without their costumes rehearsing in a studio. Visuals change on both sides of the screens without any distinguishable pause in the audio.

The soldier recalls the shooting incident: "At the time, I was like, s***! You know, I’m gonna to jail. I just shot a man who didn’t need to be shot. I didn’t realize that that kind of thing would be ignored later on," before immediately continuing "But I ran back to the rear of the car and I remember yelling, 'And never call me again!' And I slammed the door. And she couldn't get in through the gate." We have been transported from Iraq to Germany without in so much as a pause in the narrator’s voice.

Casting thus highlights the fragmented quality of our memories and our inexact recounting of past events, as well as our very short attention span — the scene changes before our mind can wander. Fast deconstructs these imagined realities before rebuilding them to form an entirely different "truth" that is all but authentic.

Perhaps it is only fitting that the exhibition owes its title to a novel — Leo Lipski’s Niespokojni (The Anxious) — that relates artists’ foreshadowing of ghastly events before the onset of World War II. In reflecting on the origins of conflict, this group of artists hopes to hand us the key to avoiding further horror and destruction.

Journalist and art critic, based in Washington, DC, USA. Producer at the Washington Bureau of NHK (Japan Broadcasting Corporation). Born in Paris, France.

Les Inquiets
The Anxious
Five artists under the pressure of war