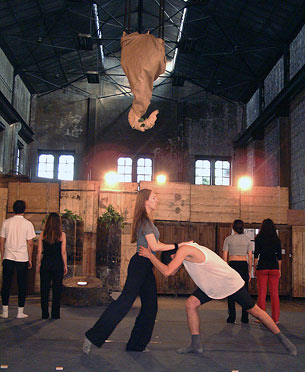 Aleppo, Syria’s second-largest city, is home to one of the country’s most interesting art institutions. Issa Touma, a Syrian of Armenian descent and an artist, curator, and photographer by calling, has operated his Le Pont Organization as a site for exhibitions and international exchange since 1996.

When I visited Issa Touma in his gallery in October 2007, he was preparing an exhibition about two politically explosive walls: the Berlin Wall and the wall between Israel and Palestine, the latter photographed by Rula Halawani. To intensify the impression of isolation and separation, some of the works were shown hanging from the ceiling, as if a wall ran through the gallery; the intent was to recall the many physical and mental barriers that separate people from each other.

Issa Touma is all too familiar precisely with mental walls. He is known in Syria and internationally for his innovative and courageous presentations and projects, which are anything but easy to realize in a country with a notoriously conservative art scene. He organizes an internationally recognized photo festival, the International Photographic Gathering, a forum for exchange and discussion that, since its beginning in 1997, has brought together internationally recognized photographers and young colleagues in Syria. Since 1999, the Women’s Art Festival has been another pillar of the activities of Le Pont, through which new and sometimes controversial art reaches the otherwise so conservative city.

In his own photographic work, Issa Touma concentrates on timeless aspects of his home city by investigating patterns of traditional religious and secular life. The concepts of the festivals are also suffused with this reflective humanism. Despite the controversies that they trigger, there is no political program behind them, but only a deep conviction that art can indeed contribute to bringing people closer together, beyond national, cultural, and religious boundaries. But the Syrian rulers can hardly imagine that an artist can attract so much international interest solely through art and a free spirit. Thinking freely and independently can be dangerous in a country like Syria, and although Issa Touma is not interested in political activism, he is under constant pressure and must always expect to be harassed. He reports that his working conditions are extremely difficult. The police frequently search the gallery, electrical current is arbitrarily shut off during events, and even the flowerpots in front of the door are destroyed.

In a country where artists (and all citizens) are expected to take part in the official paeans to the leaders and the system, an independent spirit seems to be regarded as a special provocation. The strict control and surveillance of all cultural and artistic activities in Syria is a tremendous obstacle to free artistic development. On the one hand, new galleries in Damascus and the currently so intense interest in Middle Eastern art are increasing the visibility of Syrian artists, especially painters, in international art events, but on the other hand many art producers suffer under the restrictive conditions. That is precisely why it is so important that people like Issa Touma encourage young artists to explore new creative possibilities.

Although the state authorities observe Issa Touma’s work with suspicion, many people from all strata of society visit the events and exhibitions with great interest. Thus, one encounters at them foreign diplomats, artists, and intellectuals as well as veiled women. Le Pont has attracted international attention since the 1990s, especially because of the International Photographic Gathering. Renowned photographers from the Arab world, like Tarek Al-Ghoussein, Rula Halawani, and Anas Al-Shaikh, have exhibited, along with European and American artists. The activities concentrate primarily on photography, but Le Pont occasionally also shows installations and video art, which are otherwise seldom found in Syria.

But much time and energy is lost to the constant problems with the power structure. This also explains why Le Pont does not have an Internet connection or website of its own. “If we had that, the police would merely see in it another reason to disturb our work.” So Issa Touma uses the city’s Internet cafés as an office, from whence he sends invitations by e-mail and carefully avoids any presence in the country’s media, which lends the activities of Le Pont an air of the subversive, a certain underground touch. European visitors who feel attracted to the romance of revolution may find this very exciting, but for those who have to work under Syrian conditions, it is not only strenuous; it is also dangerous. It remains to hope that the situation will improve in the not-too-distant future and that Le Pont will be able to unfold the full potential of its possibilities.