About "Beauty and the Beast", the miniature sculpture and photo project by the artist from the UAE. 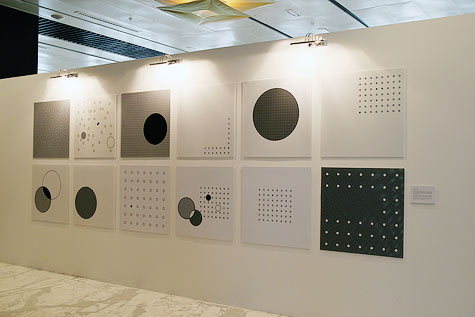 It is the prerogative of young people, to follow different paths before finding one’s own way. And the artists may not elude what seems to be rather a rule than a custom. First Layla Juma tested herself in painting, trying to give shape to one of her favourite themes, that’s to say incompleteness. These early works present a mixture of finished and unfinished, a meeting point, and yet without contamination, between different steps of the artistic production. And this very same dichotomy is also nominally expressed in the only sculpture created by Layla, "Beauty and the Beast", an artistic testing bench in its miniaturization, in the intrinsic poverty of the material (chewing-gum), substantially in the simplicity of the means, actually a symbol of the urge for the artist to put her seal to the material, to make it hers and to give it back transformed.

This is the work which has been selected and is at the very moment exhibited at the Singapore Biennial. What an eccentricity, since Layla is mainly expressing herself through other media, mainly computer generated images and 3-D objects. Yet here it is the physical dimension to be engaged, the act of chewing being if not private, surely intimate, strictly related to the body. Almost like a secretion, this work comes from the body of the artist and is the result of an act of reluctance. Nevertheless, it has a strong latent ironic aspect, a demystifying approach to the noble art of sculpture. Reducing the matter to a serial and easily affordable product; eliminating any possible "exterior" tool a sculptor will need to reduce the row material into a creation; even renouncing to the atelier, the space of the artistic expression, is a way of defying conventions. And yet, the realization of an intuition…

The presentation of "Beauty and the Beast" at Singapore Biennial 2008 is characterized by a high contrast: a contrast in proportions and in perception. The miniaturize sculpture is exhibited into an over dimensioned glass box while enlarged pictures are hanging on the walls. If the visitors directly look at the sculpture, then they won’t probably see much; and when they will turn to the walls in order to look at the details, they will only see a reproduction of the artwork.

Actually, the theme of the dichotomy is a constant in Layla’s work: "Form and Space" (2005), "Twins" (2007), "Combination" (2007), "Constants and Variables" (2008), all of them refer to a confrontation or to a reversed perspective. Issues like double, mixture, binary relationship are solved in ways always renewing, following visual dynamics absolutely not prefixed. These works implicitly reveal her ideal filiation from the masters: in primis, Hassan Sharif and Mohammed Kazem. Sharif’s "Semi-Systems" and Kazem’s "Autobiography" both seem to be influential in Layla Juma’s artistic practice: "My work presents … details or information related to my personal life", says Layla about "Constants and Variables". And repetitiveness with slight variation along with her inquiry on shapes and their infinite possibilities of combination clearly reflects the inexhaustible research about position in time and space carried out by Hassan Sharif.

Her very last works – computer generated drawings – venture on a further new direction: the recurrence of geometrical forms still remains a peculiarity of her research, now translated into a three-dimensional production. Projects for objects, sculptures, monuments then emerge from the linearity of the generating traits. Broken lines, unclosed, interrupted, resumed forms, inserted in each other, this is the language and the dialogue that Layla Juma silently leads, almost testifying to the fragmentation and intersection of human experiences with a vivid interest for the outcome of their encounter.