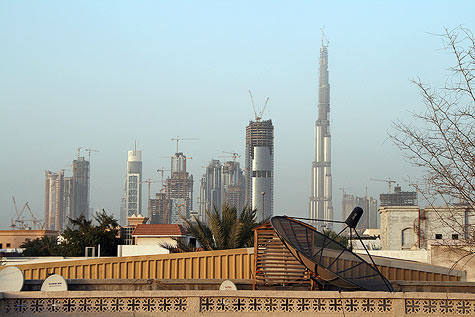 After the financial and economic crisis that hit the world in the second half of 2008, this development project of Dubai has been put on hold.

The various roundtable discussions during the Art Dubai and the paralleling Creek Art Fair focused a remarkable amount of attention on strategies for cultural policy and on developing new art centers in the Middle East. Especially suspenseful was the question whether and how Dubai, renowned for its striving for superlatives, will try to outdo the Saadiyat Cultural District [1] in neighboring Abu Dhabi. What more could be done to trump what Abu Dhabi has already brought to the phase of realization – the connection between leading cultural trademarks, like Guggenheim and Louvre, and the names of the most famous architects? Official spokesmen for both emirates repeatedly declare that there is no rivalry between them, but it is hard to imagine that Dubai would not want to push to the top precisely in the prestigious area of culture.

But little could be learned at the talks from the representatives of the Dubai Culture & Arts Authority, which was founded at the beginning of March. It has meanwhile turned out that Michael Schindhelm (Cultural Director) and Scott Desmarais (Director of Strategy & Business Development) knew a lot more, but had apparently been asked to maintain strict silence. The head of the Authority wanted to personally announce the far-reaching plans, in whose elaboration they are taking part, a few days later.

On March 26, 2008 Sheik Mohammed bin Rashid Al Maktoum, the ruler of Dubai, presented the gigantic cultural development project, Khor Dubai. For the ceremony, he chose a highly symbolic site: the reconstructed palace of his grandfather, Sheik Saeed Al Maktoum in Al Shindagha, the oldest settlement at the mouth of the Creek, the lagoon that extends deep into the interior of the country. An top-notch cultural zone is to be built beginning here and running for about 20 kilometers along the Creek and an artificial extension of the waterway as far as the completely new district, Business Bay. Currently planned are 1 opera house, more than 10 museums, 14 theaters, 11 galleries, 9 public libraries, 72 "cultural icons", and 7 cultural and arts institutes for local and foreign artists.

When Sheik Majid bin Mohammed bin Rashid Al Maktoum, son of the ruler and Chairman of the Board of the Dubai Culture & Arts Authority, presented the project, he said, "The Khor Dubai cultural project will epitomize a futuristic model of an international city. It will convey a singular message of pride in our tradition, culture, and national identity as part of our ethos to foster harmonious co-existence, and achieving peace and prosperity for global communities." With this plan, the aim is to use the Emirate’s own resources "to gain a permanent place among the most developed and civilized countries of the world". Starting with "self-confidence and pride of national identity", the goal is to provide the next generation with rich possibilities for exchange with the cultures of the world. [2]

Initially astounding is how Dubai is now placing "great importance on the role of culture and art in the development of a modern and dynamic society", because so far Dubai has seemed interested solely in business and spectacular construction projects. When Dubai’s chances as an art center were discussed in the events accompanying the art fair, most of the speakers (among them only a few from the Emirate) saw the most important starting points in the internationality of the city’s residents, who come from so many cultures.

A few days later, at the presentation of Khor Dubai, the autochthonous cultural traditions were specifically underscored as the underpinning for Dubai’s cultural development. The ruling family thereby unmistakably signaled that it does not intend to relinquish control over initiatives and standards in cultural matters, even if Emiratis comprise only 15% of the population anymore. Certainly, both the debates about cultural importation raised by the plans of neighbor Abu Dhabi, as well as fears of foreigners overwhelming Dubai’s and the region’s cultural identity have not lacked influence on the conception of Khor Dubai. It is hardly a coincidence that the first museum dedicated to the Prophet Mohammed will be built in Dubai, the "most Western" of all the Gulf Emirates, before more museums for contemporary art and various areas of culture and science follow.

Based on such premises, Khor Dubai is to be an integrating, national project, "a living museum" developing in partnership between the public and private sectors and "celebrating the multi-cultural diversity of Dubai". The official press release says Khor Dubai will help "give life to His Highness Sheik Mohammed's vision of Dubai being a centre of cultural excellence influencing not only local and regional artists but also global arts movements". That’s why the Dubai Culture & Arts Authority is meant to help develop a new model for the future of culture and the arts in which the strong native heritage of the Emiratis will fuse with the highly diverse cultures of the foreigners who live here.

As could be seen at the Art Dubai and the many parallel events, vibrant cultural activity has indeed arisen even without directives "from above". It could all be integrated in the major project Khor Dubai – and sensitively, without dirigiste controls, one would hope. It is pleasing that "The Flying House" collection is showing the astonishing concept, performance, and installation art that has been created in the emirates since the early 1980s. Without a private initiative of this kind, this extremely important part of the cultural heritage would most probably have been lost long ago. 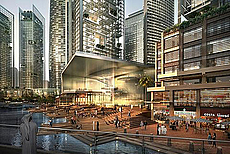 Has Dubai bounced back enough that it can now afford an Opera House and a Modern Art Museum?