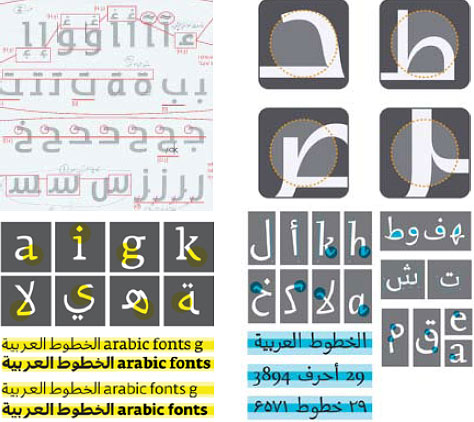 The Khatt Foundation was created in 2004 in Amsterdam as a non-profit cultural foundation dedicated to design research and development through projects and programs that focus on rejuvenating (from within the culture) the applied arts traditions of the Arab world and the Middle East. The word khatt not only refers to writing, script, lettering, calligraphy, and typographic style. It also means line, as in a trace on a page… a line of thinking… a direction...

Haupt & Binder: What was your line of thinking when you decided to found Khatt? How is such an initiative related to your own background and personal experience?

Huda Smitshuijzen AbiFarès: The primary idea was to create a cultural foundation dedicated to advancing Arabic typography and design in the Arab world and the Middle East that can provide a platform for building cross-cultural creative networks and that educates through an awareness of the vital role that design can play in building a sustainable environment, conferences, forums and publications. The goal was to bridge and establish dialogues between East and West through design and typography (the visual and written aspects of communication). The second goal was to bring back the heritage of Islamic applied arts into a contemporary design and new media context and to reconnect Arab youth to that heritage and encourage them to innovate while establishing a link to that historical cultural tradition.

As a graphic designer trained in some of the best art schools in the US (Rhode Island School of Design and Yale University), I came back to the Middle East at the beginning of the 90s (namely to Beirut, and then later moved to Dubai) to teach and practice as a designer. I faced some serious setbacks in terms of available skills and knowledge about design, typography and the applied arts in general. As Arab designers in general, we were always looking to the West for inspiration and guidance (and standards of excellence). I myself ended up teaching for 12 years at American educational institutions (American University of Beirut and later the American University in Dubai). We rarely took the time to examine and study our Arab and Islamic heritage when thinking of design. I had to teach myself about my own Arab artistic heritage when I wrote my first book "Arabic Typography". I realized then that we needed to look at our heritage, but not copy it: just extract what works and add new life and new techniques that relate to the contemporary realities of today’s Arab societies — which tend to have traits that transcend national boundaries and others that highlight these national differences between various Arab nations, adding to the richness of the Arab and Middle Eastern visual culture.

Haupt & Binder: Could you mention some activities and events organized by Khatt in relation to and as examples of the foundation's goals?

HSA: The activities that the Khatt Foundation has undertaken to date have as a common thread education (in the broad sense, with Arabic typography and contemporary design as binding themes). We see the Arabic script as the simplest and most abstract building block of all the applied arts in the Arab and Islamic cultures (and an emblematic and defining visual identifier or common ground of these diverse cultures), and we aim at keeping it at the heart of all our activities. Some examples:

- Kitabat, the first Arabic calligraphy and typography conference (2006, in collaboration with Linotype and the American University in Dubai). This was the first bold project that combined the past and the future, addressing the history of the written script, its development as typography and its connection to contemporary design and technology.

- The "Typographic Matchmaking Project (version 1.0)," was a three-year project that brought Arabic and Dutch type designers to collaborate on creating 5 new Arabic fonts that match Latin (Dutch) fonts, creating 5 bilingual font families designed especially for bilingual publications. The project resulted in a book that documented the process and that set rules and guidelines for designers who would need to undertake similar design projects. The book was released with the resulting Arabic fonts, which ended up being used by all sorts of prestigious organizations as well as students and professionals in the Middle East, winning design awards and making a small contribution to the advancement of contemporary typographic design in the region. The book was launched with a symposium in Amsterdam on contemporary Arabic visual culture, Khatt Kufi & Kaffiya, and the fonts were showcased in the mock-shop exhibition El Hema (which in turn was realized as a collaboration between young Arab and Dutch/European designers).

We are in the process of initiating the "Typographic Matchmaking project (version 2.0)", which is focused on typography in the urban built environment and making a link between place-making, architecture and bilingual typography (Latin and Arabic) in two parallel cities like Dubai and Amsterdam. This time the project will include collaborations between Arab and Dutch type designers and architects. We are also in the process of developing a traveling exhibition entitled "Orientalia: Lead, Light & Letters" which will link the typographic design heritage of Europe to that of the Arab world.

H&B: In August 2007, you launched the Khatt Foundation online network. What dynamics and synergies does such a network structure release, and what advantages does it offer?

HSA: What the online network provides is an international face to the members and the culture and design in the region in particular. It also brings together people who would not otherwise have met or known about each other, through common interest and coincidentally browsing and discovering people that you need to talk to for professional collaboration and/or social interaction and support. It transcends physical boundaries and is immediate and economical.

H&B: Who are the network’s members and visitors, and where are they based? We've noticed that the website is mainly in English…

HSA: The members are in general designers and visual artists and scholars of Arab or Muslim background, as well as Europeans and Americans interested in the cultures of the Arab world and Middle East. In principle, this is an open community with content generated by the members of the community. The language is mainly English because it is an international language and because most members publish in English, although technically the site is multi-script multi-language enabled, so they could just as easily decide to write in any other language they feel comfortable in. We are planning in the future to have some editorial control on some sections of the site and more translations of some of the content, but that is dependent on the volume of funds we can raise for this purpose.

H&B: As a foundation, how do you harmonize commercial and non-commercial projects and outcomes when setting up projects in partnership with local industries?

HSA: We keep to projects that have cultural relevance and that are aligned with our goals; we try to work on projects in which the product is meant to promote young Arab & Middle Eastern designers and/or the culture. Our interest in the commercial aspect comes from the fact that artifacts are a more democratic way of spreading the message beyond the confines of the art-savvy to the wider public, and we like to create things that are art, that may have an indirect social message but that also serve a pragmatic purpose (like fonts for example).

H&B: The Khatt Foundation just opened an exhibition at Traffic Design Gallery in Dubai with the results of a competition to "re-invent wall design with a distinct Middle Eastern touch". How was the response to the submission call launched earlier this year, and how would you summarize this experience?

HSA: The last project we launched through the Khatt network was a design competition for the first Khatt Design Collection, entitled Project Mulsaq. The response to the competition was very encouraging in terms of participation: we received 150 design submissions and we had to cut our selection down to 19 final designs that we exhibited and that Mosaiques produced in a limited edition of wall stickers for interior decoration to sell through various resellers in the region and internationally. The opening of the exhibition at Traffic was very well attended, and many visitors came back a few days later to purchase some of the wall stickers to use in their homes or offices.