Hybridization as a creative process. An interview with the French- Algerian artist. 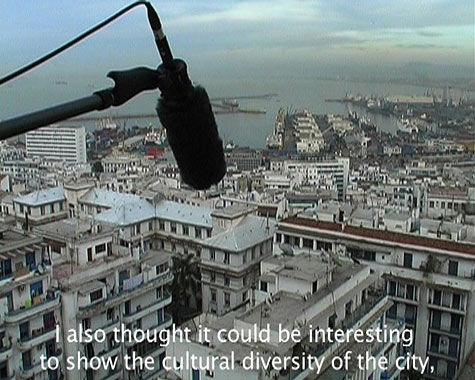 Katia Kameli was born to a French-Algerian family in Clermont-Ferrand, France in 1973. She lives in Paris. After study residences in Greenwich, Vienna, and Bourges, she completed her study of art at the latter and acquired an additional diploma at the Collège-Invisible of the Marseilles Art Academy.

Silke Schmickel (SS): The first of your works that I saw were the Super-8 films Nouba, Aicha, and The grass is always greener on the other side. All three testify to an astonishing plasticity reminiscent of the aesthetics of classical paintings. Did this reference play a role? Did you begin your artistic career in this medium?

Katia Kameli (KK): I come out of painting and photography, and the relationship to classical painting is indeed present, but it was more unconscious when I made these films. The decision for Super-8 was really the result of exigency. In 1998, when I was studying at the art academy in Bourges, they didn’t want to lend me a camera to shoot in Algeria. I bought 14 rolls of film, packed my own Super-8 camera, and took them to Algeria.

SS: Since these early works, a multiplication of your artistic practices can be observed, from video works and photography to installations. Are these parallel projects or new orientations?

KK: I had to assert myself in more and more areas and never wanted to be associated solely with one medium. I decide on the medium depending on the context. If I have worked more in video recently, it is because of my limited possibilities to work in Paris, which make it difficult for me to conceive large installations. My studio is like a home studio. For my most recent project, which I began in January 2008 during an artist’s residence in New York, I was able to realize a film and an installation. I like to carry out a declination of ideas.

SS: Your project Bledi is a good example of such a declination. It starts with drawings, which were then animated and they finally led to a video and a video platform. What does Bledi mean and how did it develop?

KK: Bled is Arabic for "land" and "I" is a possessive, so it means "my country". I began by downloading Algerian newspapers and then reworking them into drawings. The resulting 30 drawings became the storyboard for the film. I wanted to use these pictures to appropriate the reality of the Algerians. The work shooting my film led me to set up a video platform in Algiers. While I was seeking funding for the project, I came up with the idea of a "making of". All the elements of my work stand in relationship to each other; it’s a kind of coming and going.

SS: What also connects your works is research on interculturality, on in-betweenness, whereby Western references are juxtaposed with Arabic ones.

KK: Yes, being in between and every kind of hybridization are central motifs in my work. This is because of my own history; I have always traveled back and forth between many countries and was never tied to a single region. And that is reflected in my work. Formally, as well, I don’t have just a single terrain.

SS: Your video Nouba displays this form of hybridization. You enrich the image of an Algerian wedding with electronic music, which is more Western in character…

KK: I came back from Algeria with this film and I felt a necessity to de-territorialize the images. I decided to use sound to achieve a Verfremdungseffect, in order to avoid all exoticism.

SS: Nouba opens the second edition of the DVD collection Resistance(s) [1], which contains works by video artists from North Africa and the Middle East. Is art a mode of resistance, and can it change our often stereotyping vision of the Other?

KK: When I wanted to shoot Nouba, I wanted to cast a different glance at the situation of women in the Muslim world. So the film has its place in Résistance(s) , with everything the word implies.

SS: Along with your own artistic activity, you are also active as a producer, especially with young Algerian filmmakers…

KK: When I shot Bledi, I got to know many Algerians who sensed that I did not have the typical views of a Western artist, and they trusted me. That made it clear to me how important it is to give them a possibility to express their view of things. So we founded this platform and produced five films in one month. I had no idea how these films would be received. Two of them were shown at a great number of festivals, and I am very happy about the result. This project created a special situation in Algiers and gave the young people new impetus to produce their own films.