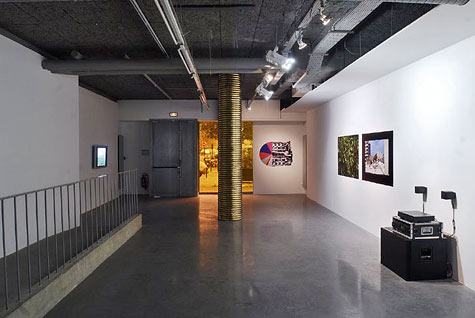 Somewhere between the living and the nonliving, the animate and the inanimate, it is possible that there exists a gap within which the two states overlap and become interchangeable. It is inside this space that, as in dreams, one speaks to oneself using the voice of another, and speaking and listening — subjectivity and objectivity — either fuse together or collapse entirely.

Hassan Khan's stuffedpigfollies is a series of six 20 x 25 cm Inkjet prints on Canson paper. Both an independent work and a component of his installation KOMPRESSOR (2006-2007), the six prints each feature a single hand-drawn cartoon rendering of a pig, isolated over a jaundiced yellow background. Each pig appears to be in some form of distress, with sweat or tears flying from each of their heads — cartoon language for fear, anxiety, confusion, trauma. Under each sits a line of text written in strange, squashed script similar to a form of handwriting, but with the consistency of a computer font. Phrases such as 'this illogical barrier borrowed from somewhere else' and 'which witch?' serve as cryptic captioning for the already confused pigs' predicaments.

Khan has described these pigs as signs of possession — generic forms borrowed from a history of unassumingly submissive, pudgy reflections of human endearment. They stand on two feet and gesticulate with their hooves like humans, communicating their anxieties in clear English. But 'possession' takes on a double meaning in this case, as the pigs are similarly, on each count, struggling with a strange force offstage that threatens to overtake them completely.

In his essay entitled The Uncanny, Freud describes the uncanny as a sensation of something frightening in its familiarity, citing the German word for uncanny: unheimlich ('not homely'), as well as for haunted house: ein unheimliches haus (literally 'an unhomely home'). For Freud, the sense of dread to be found in the familiar arises from a malfunction in the everyday projection of self-like characteristics upon the world outside, resulting in a total reversal. What is a haunted house, after all, but the aberration of a hearth coming to life and turning against its loving owner? Likewise with a dog, a teddy bear, a mirror image (the doppelganger), the sensation of the uncanny becomes a moment in which consciousness fails to possess its context and, in a narcissistic turn, projects its image in an 'un-homely' way, becoming 'possessed' or haunted by its own unfamiliarity.

Just as the sensation of the uncanny speaks to a rupture in the projection of consciousness upon the inanimate, so do Khan's cartoon pigs, as anthropomorphic impossibilities, signify the only space where they may exist as viable forms: that of the living nonliving, the space of projection and cyclic deferral, of dreaming. In fact, these pigs had their beginnings in actual dreams Khan has had, and they stand as a kind of reflection on their own roles in Khan's intricate web of psychic deferral. The piglets of stuffedpigfollies in fact appear painfully aware of their position as carriers, and perhaps this accounts for their traumatic states. As if witnessing their own cartoon experience of the uncanny — or, as is more likely, as vessels of Khan's own experience of it — they recoil from their roles as 'possessed' creatures. One turns away from his own image: 'I hesitate when I meet my living face' while another cannot pull himself away: 'I can only see one thing'.

Khan has of said of stuffedpigfollies in an interview "We steer dangerously close to metaphysics and psychoanalysis here — dangerously close especially if we speak of animating forces. What interests me is a form of bare metaphysics. We borrow the language of psychoanalysis to speak about something else — but what is that?" In general, Khan's work has always had at its center an interest in problems surrounding social consciousness and the mediation between a socially shaped self and an autonomous self. His KOMPRESSOR installation, however, marked a formal break from his previous work with the introduction of an almost mystical view towards the construction of identity in the social sphere. Subtitled "An exhibition based on translating sets of dreams into different forms by the dreamer," KOMPRESSOR featured a constellation of works revolving around a kind of paranoid, lucidly structuralist sublime. One work, entitled The Alphabet Book, paired gigantic letters of the alphabet with similarly bold, iconic images, mingling the irreducible elements of language (and pedagogy) with the dimensionality of the image. A submissive railing with the ominous appearance of prison bars stretched through the exhibition space. Nearly invisible, this simple object engineering circulation through the space had something in its shape that threatened to fold into its double to restrict the same circulation. KOMPRESSOR, as a whole, reads like an introduction to a haunting world of otherworldly cross-signification. This is a place where the representation of the social sphere itself has migrated completely into that of consciousness, and didactic formulations of oppression, power, exchange, and consensus are encountered through mystical testament. This is not a picture of identity construction by mandate, but rather of an invisible, flowing web of consensus.

As Guy Debord regards spectacle as 'the autonomous movement of the nonliving', [1] the anthropomorphic pigs of stuffedpigfollies are the pudgy ambassadors of a similarly animated nonliving, where consciousness animates the world not with life, but with automation. But where Debord's spectacle describes a moment when multiple subjectivities merge into a public space of consensual agreement, stuffedpigfollies inhabits a private space where subjectivity confronts itself through an interior play of totemized public forms. It is an invisible psychic reflex made visible only when it ruptures, and in this rupture — this sensation of the uncanny — the illusion of subjectivity re-emerges as performative gesture.

Writer, designer, and musician based in New York. 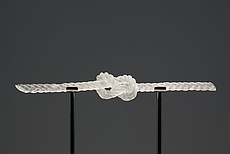