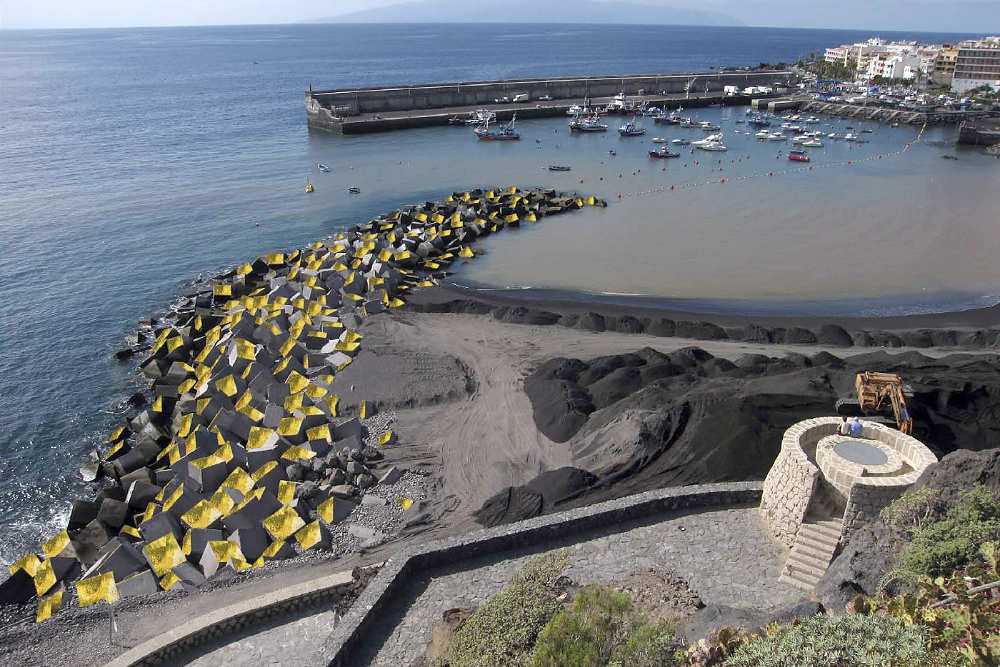 Born and based in Casablanca, Hassan Darsi founds his artistic practice on ideas that are easily accessed and have a straightforward visual appeal. His works are open to ambivalent readings and strive to reveal situations of conflict in a figurative sense. In the public realm he addresses society as a whole, combining a close awareness of his Moroccan cultural heritage with future issues of global concern.

One of Hassan Darsi’s ongoing themes since 2001 is concerned with gilding. The idea was triggered by his discovery of rolls of golden household wallpaper, 0.45 by 15 meters in an artisan’s shop close to his studio. These self-adhesive rolls were being used for precision cut, ornamental decoration in the style of traditional crafts thereby replacing hand-painted gildings.

At first, Darsi collected the cutout leftovers for playful experimentation, and started by decorating the walls of his studio with them. He subsequently developed abstract works of art, using his golden refuse to create traditionally formatted works on paper. The magical quality of the pieces is enhanced by the precious support consisting of Chinese rice paper mounted on board. Darsi names his pieces "Chute", which in French is as much as "Fall", a pun on the leftover character of the materials in association with the rhythmic cascade of golden abstraction falling down through the image.

In 2007, Darsi carried his golden applications into public space by using his adhesive rolls on the façade of an uptown commercial art gallery. For the first time, the Galerie Venise Cadre in Casablanca was presenting vanguard contemporary art. The initial four days for which the installation had been authorized turned into a duration of five months. The gallery became "the golden house", a landmark for the town’s taxi-drivers and a general subject of conversation for all those who had seen it. The reflections in the high-gloss surface of the adhesive paper turned the building into an Impressionist painting but also hinted at the extensive use of traditional ornamental gildings.

In January 2008, Darsi worked on "Urban Choreography". In this public action that took place in the Al Massira district of Marrakech, he made a toy-doll perform a modern dance on the roof of a car. The naked body of the blond beauty with blue eyes is covered in gold. The black circle on her chest reminds us plainly of the fact that she is a highly desirable speaking doll. Originally, Darsi wanted to drive through the city with the doll on his car roof but was denied the necessary authorizations from the police.

Darsi then intervened in the port of Guia de Isora on the Canary Island of Tenerife with a piece he has called "Golden Jetty" or "Or d’Afrique" a pun on "Out of Africa" and "Gold from Africa". This is the first edition of a series of similar interventions planned for seaports around the world. Here, Darsi applied his golden adhesive to the concrete blocks of the jetty: the bewitchingly beautiful and geometrically minimalist water-edge of the wealthy marina stands out in paradoxical contrast to the brutality of the concrete, with associations of coastline protection against warfare or illegal immigration. Despite the sea wash, the intervention lasted for some months and the artist produced a series of photos that capture the warm golden gloss in sharp distinction from the rough concrete.

Hassan Darsi, whom we already know from his rehabilitation concept for Hermitage Park in Casablanca, has extended his golden applications to an urban project based on the renovation of the Zevaco globe at the centre of Casablanca. The monument was conceived in 1971 by Jean-François Zevaco, one of the most renowned French-Moroccan architects of the period, as the symbol for an underground pedestrian passageway between the Ville Nouvelle, the colonial city, and the ancient medina. The monument deteriorated together with its visions of an emerging golden age. The "Cas’arts 2008" festival put out a call for entries to restore the Zevaco globe. Darsi proposed to gild the monument with his adhesive material, thus dressing it in new, sparkling clothes that, however, would soon deteriorate. He hoped to thereby trigger a discussion on questions of urban modernity and related long-term effects. Casablanca’s city council pushed Darsi’s project aside, precisely because of its predictable short lifespan and a proposal to paint the globe in different colors was sanctioned. Ironically, the council then decided against the colors and required the monument to be painted in gold, the colour being of a "more neutral character". Darsi’s model for this project was shown both in Casablanca and in the exhibition "In the Desert of Modernity. Colonial Planning and After" in Berlin. He has followed up these presentations with "The Great Shipwreck", a large installation using Zevaco’s globe in the imagery of a sinking and wounded planet covered in burns. The artist is currently working on golden applications on tanks used by the Nato in the Middle East.

Hassan Darsi works with the displacement between visual perception and our concept of worth. His adhesive gildings open up a space for reflection as to material fakeness, the contrast between the nature of the gilded object and civilization’s fascination for gold. For Darsi, a central issue of his golden applications is the moment of transformation, encompassing notions of covering up, restoration, and artificial glorification.