Home (stories): a film project with asylum seekers and illegal migrants in Mestre and Venice. 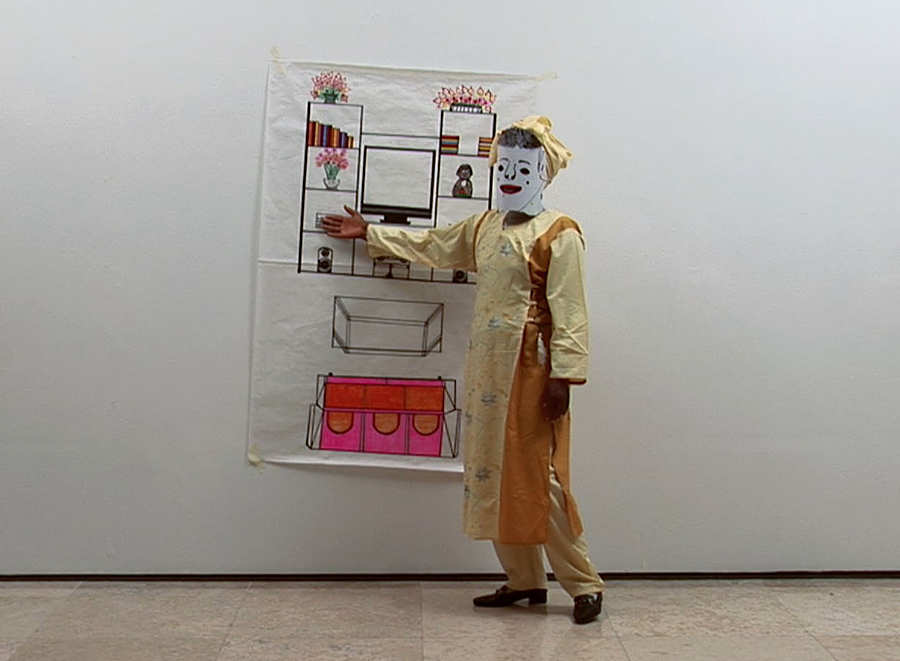 The film HOME (stories) is based on a performance project that the Iranian artist Ghazel, who lives in Paris, worked up in September 2005 in the framework of the 37th theater festival of the Venice Biennial. The performance HOME was the result of a workshop with asylum seekers and "illegal" migrants ("sans papiers", "clandestini") in Mestre and Venice. The women, men, and young people from Afghanistan, Albania, Congo, Iran, Ivory Coast, Kosovo, Kurdistan, and Romania used various media, like drawings, stories, and poses, to present their respective ideas of home or homeland, which could refer to memories of the past, an imagined future, or the precarious state of waiting in the transit zones of refugee camps. Two years later, in the fall of 2007, the artist returned to Italy to work on a film version of the project with the same persons – or at least with those who have not meanwhile returned or been deported back to their countries of origin. The result is a 43-minute film that takes up some essential elements of the original performance, like the actors’ masks and the variance in their presentation techniques, but which also takes into consideration what has meanwhile changed in the migrants’ situation in terms of legal residence and social status.

While HOME (stories) takes its protagonists’ concrete stories very seriously, it is artistically characterized primarily by still being far removed from the widespread documentary approach to artistic dealings with migration and its criminalization. HOME (stories) is not interested in overdramatizing flight, expulsion, and discrimination in order to attract attention, even if these backgrounds are repeatedly palpable. Rather, it positions its actors as shapers of their own personal survival strategies and as interpreters of the historical, political, and economic backgrounds of their flight. When Marco III views photos of Venice’s lagoon, which might trigger thoughts of vacation in other viewers, he says he has "very bad memories with water", hinting at some of his experiences on the way to Europe. The film’s structure already shows that it does not seek to paint a self-contained picture of a particular situation, but is more interested in significant overlappings of memory, projections of the future, and interim adjustment to adverse circumstances. The stories of Paola I and Marco I to Marco VII – the Italian aliases the migrants use here – are less narrated than montaged in short shots and narrative fragments. The relatively rapid sequence and multiple returns of moments of a person’s experience thus produce cross-references to other stories. The actors’ masking, which not only serves to protect their identities, but also has to do with the techniques of inconspicuousness and mimicry that are necessary in illegality, thereby shifts the level from that of the persons involved to that of representative examples. But what kind of fragments of narrative are they?

The film begins with Marco I, who enters the room in disguise and hangs a large, colorful drawing on the wall. One may initially wonder what the moon and stars have to do with the issue of home and homeland, until Marco I says (probably in Kurdish) something translated into English as: "I don’t have a home in Kurdistan. I don’t have a home in Europe. Where do I go? On the moon?" After we have had a brief chance to view Marco’s drawing of the war in what seems to be Iraq’s Kurdish region, in the next shot we very briefly see Marco VII in his pink panther mask riding by on a bicycle. Right after that, Paola I uses a meticulously elaborated drawing to demonstrate and comment upon her future salon. "Ca c’est future," says Paola, who speaks both broken French and broken Italian, which probably indicates she has already been in Europe for some time. This film’s approach to language is remarkable in that some actors speak their native tongue, while others speak English, French, or Italian, which in turn entails deviations between the oral level and the translated subtitles. In this way, an unavoidable aspect of the film is tied to the aspect of language mastery as an essential necessity for migrants. Marco I, who speaks the best Italian of any of the migrants, has one of the most beautiful performances – if one can speak of beauty in such a context – when, in an unidentifiable parking lot or playground, he speaks of his loving attention to detail in his work as a pizza cook, so that the viewer experiences more than vividly the contradiction between the "real Italian" we might see in him and the "illegal" he is for the law. In HOME (stories), Ghazel succeeds in leaving her figures enough space to unfold their imaginations and in presenting them as chroniclers of their own personal experience as well as of political constellations. When Paola I, in a parking lot, builds her future home for a family with three children using solely the virtual shaping power of her body; when Marco III appears with a downright philosophical diagram of the vicissitudes of life; and when Marco V explains his flight from the Ivory Coast with global economic interests, then Ghazel confronts us with people marginalized politically and thus turned, in a way, into speechless subjects, but she also underscores the potentialities of their scope for thinking and acting.

In comparison with Ghazel’s earlier works, HOME (stories) definitely marks a new approach in her artistic procedures, but both substantive and formal continuities can be made out, for example when one recalls Wanted, the poster works from the late 1990s with which Ghazel, who was herself in danger of deportation from France, sought a man from the European Union willing to marry her. HOME (stories) also shows connections with the Me series, the miniatures she has produced since 1997, which showed Ghazel in chador performing every imaginable and unimaginable act in a precarious space of dislocation between Iranian and Western society – the series that made her known. This continuity is particularly salient in the figure of Marco VII, whose short appearances verging on the absurd are repeatedly inserted between the somewhat more concretely graspable figures. One time crossing the street with a roll of toilet paper, another sitting on the street with a newspaper, and then passing by inconspicuously (with his pink panther mask), whereby a police car seems to follow him by chance, this figure seems like a contemporary, clandestine variant of Charlie Chaplin’s tramp.