Women of images in Tunisia. Photographic and video work by ten artists from Tunisia, shown in Paris. 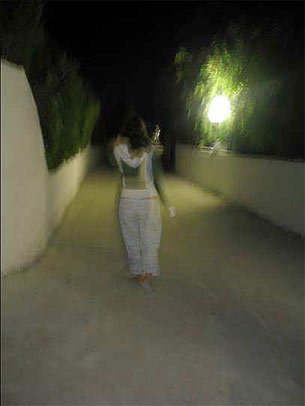 Private space - Women of images in Tunisia is an exhibition curated by Michket Krifa featuring photographic and video work by ten woman artists from Tunisia. The catalogue postulates that the last 15 years have been witness to a vast development in the production of visual work by women artists. This wealth of feminine creativity runs against the flow of prejudice weighing on women in the Arab world and calls for emancipation from regional classifications and focus on individual artistic approaches. An exploration of the limits of the intimate versus the public and the relationship between a state of being and appearances were major issues in the choice of works.

Dalel Tangour questions the dress code of female wedding apparel; Faten Gaddes attributes a soul to the objects surrounding her, involving them in a spiritual dialogue. Lilia Benzid explores the borders of intimacy through banal images such as domestic untidiness. Marianne Catzaras reflects on the impossibility of communication between men and women, whereas Meriem Bouderbala bases her piece on the work of French psychiatrist and drapery fetishist Gaetan de Clérambault (1872-1934), who c. 1920 took some 40.000 photographs of veiled women in Morocco. Bouderbala’s visually appealing comment concerns obsessional multiplication of draped gestures as an attempt to coin female identity.

Mouna Jemal, happy mother of triplets, mirrors and repeats photographs of her children, thereby turning most intimate moments of her life into universal elements of a decorative pattern. Mouna Karray questions uniqueness and the notion of The Other in adopting the role of the subjects she photographs; Nicène Kossentini is haunted by the rhythm of time produced by the disappearance and reappearance of beings and memories and reflected in the virtuality of images submitted to the ripples of water. In a series of photographs taken in an abandoned house, Patricia Triki attempts to reconstruct an intimacy that has been discarded.

Michket Krifa is of Tunisian origin and has lived in Paris for the past 20 years. She is an independent curator for visuals arts and consultant for film in Palestine, North Africa, and the Middle East.