His Double Vue project captures the complex encounter between the traditional and the new Bahrain. 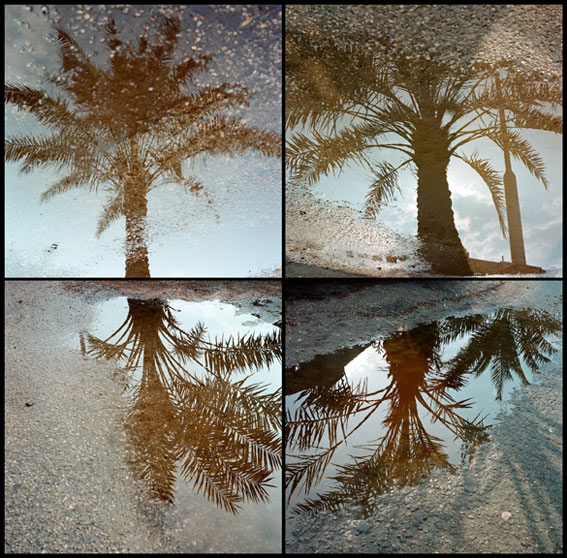 Double Vue, at Bahrain’s Centre Culturel Franco Bahreinien - Maison Jamsheer, is part of an ongoing study that began 8 years ago. Inspired by the work of Eugene Atget, who documented Paris at the turn of the twentieth century, Zakharia initially intended to produce an objective record of his new environment. Unlike Atget however, who remained committed to an unequivocal withholding of moral judgement in his work, Zakharia’s photographs soon developed into an emotionally charged visual narrative that captures the complexity of the encounter between the traditional and the new in a study of stark contrasts.

Double Vue is a visible departure from Zakharia’s earlier oeuvre in terms of both subject matter and form. Although still very personal, it is less introspective. Zakharia examines his environment this time. While he had made a tentative attempt to explore beyond himself in his Division Lines series, it is far more literal and candid in Double Vue. As such, the promise of a ‘documentary’ truth in Double Vue is a tenuous one.

Despite the conspicuous absence of people in this body of work, it is nonetheless about people. Zakharia questions whether it is humanly possible to be psychologically and intellectually prepared for such drastic social changes as those wrought by the new oil wealth which has manifested itself most clearly in urban growth. His photos show evidence of a people holding on nostalgically to the vestiges of a dated lifestyle.

Medium and form take a step back in relation to subject matter in this body of work. Zakharia (temporarily, he insists) abandons his hallmark photocollages opting instead for photomontages and composite images that are both simpler and more emotive, allowing the viewer to focus on content. Still, the images are clearly informed by his collagist’s aesthetic as well as his engineer’s inhibition resulting in an understated yet confident visual harmony. This is evident in such works as Burial Mounds and The Colonel and the Bug in which Zakharia aligns separate photographs almost seamlessly to create the illusion of continuity, even when the images are as seemingly disparate as in Scarecrows.

Zakharia views sharp contrasts as natural rather than contradictory. In his Three Faces of Eve, he juxtaposes the façade of an abaya shop, a painting of a French showgirl, and a billboard advertising a local beauty salon. No judgement is inherent in this line up. In a sense, 'each thing or person photographed becomes – a photograph; and becomes, therefore, morally equivalent to any other of [his] photographs' (Susan Sontag). Each image is a representation of one facet of the feminine in Bahrain. Thrust together too soon, all three coexist awkwardly as each tries to find her place alongside the other.

But Zakharia does not view all of Bahrain’s contrasts with the same impartiality. Evident in his photographs of the old town of Muharraq, and of Bahrain’s villages is a sentimentality clearly absent in his images of the modern urban landscapes. In Muharraq 4, he photographs the facades of old houses at close range capturing the texture of the walls, the cracks and the details of the patterned panels with the poignant intimacy of a lover’s gaze. Looking up at the buildings, they appear to tower into the clouds greatly amplifying their diminutive stature.

In comparison, New Developments betrays the sense of alienation that the new urban landscape evokes in Zakharia. The first panel of the composite image shows a newly constructed building standing alone in a barren landscape. The feeling of loneliness is exacerbated by the distance from which the photograph is taken and by the fact that no roads lead to the building. It is isolated. In the second panel, Zakharia surrounds the tip a new structure with a concrete frame, rendering the image at once distant and claustrophobic. It is inaccessible to him. Zakharia feels a misplaced nostalgia for an old way of life that he has, ironically, never experienced in Bahrain.

Nomadic by nature, Zakharia is acutely aware of transience and as if in rebellion, he obsessively photographs to preserve his memories. But like his memories, the images soon take on a life of their own as he sculpts them into his own reality tainted by judgement and romanticism.

Zakharia insists that his photography is essentially documentary. However, his preference for the old and his ambivalence towards the new is difficult to overlook leaving the viewer to ponder whether he has merely captured the mood of the place or subconsciously infused his images with his own prejudices.

Independent writer currently based in Bahrain.

The exhibition is organized by the Alliance Française de Bahreïn