After its debut in 2007 as the DIFC Gulf Art Fair, the second edition of the art fair in Dubai has not only been consolidated, it has also achieved an astonishing dynamic and cultural dimension. Even if skepticism is always in place in the face of the notoriously favorable résumés that the organizers of such events draw up, it is definitely believable that the Art Dubai 2008 exceeded expectations. The works shown, the auxiliary program, the many parallel events in the city, and the intriguing talks in a mostly optimistic mood gave the visitor the feeling of attending an international art event.

Where the first showing in 2007 had 40 exhibitors, this year 68 galleries from 30 countries were on hand with more than 540 artists. The concluding press release reports that 12,000 visitors (compared with 9,000 the year before) and 240 art critics and journalists attended.

Unfortunately, concrete information is lacking on the number of works sold, which is the true yardstick for the success of a commercial fair. All we can read is that, in initial surveys, the galleries said they were "very satisfied about sales results and new contacts". And in fact it appears that, for most participants, things went better this year than in 2007. But certainly they arrived this time with more realistic expectations and had prepared themselves more for the specific context. After the apparently unsatisfying results of the last year, the illusion was probably lost anyway that it would be easy to make money in rich Dubai by marketing the established stars of the Western art market.

Already at the beginning of the 2007 art fair, purchasing interest focused on contemporary art from India and the Middle East. In 2008, Art Dubai defined its profile even more clearly in this direction. John Martin, the fair’s Director, confirmed in personal communication that the organizers want to present diversity and innovative art with the emphasis on MENASA – the Middle East, North Africa, and South Asia. Accordingly, many more galleries were on hand that come directly from or are specialized in art from these regions. But many other galleries from Europe and the USA also showed works by artists from the MENASA areas. To judge by what was said, it seems that the best sales were indeed in this market segment. Without a doubt, the Art Dubai has drawn substantially greater international attention to art from the Middle East, India, and Pakistan – and this will certainly have effects on Europe and the USA. [1]

Art Dubai’s dedication beyond pure trading in art was expressed in special programs. "Art Park" was a vast project room for experimental and site-specific works. It was temporarily set up in the underground parking garage, right below the halls where the art fair was being held. Bidoun, the art organization and magazine, also had a screening room there showing artist’s films, curated by the Bidoun team themselve, Nav Haq and Tirdad Zolghadr and primarily from the Middle East.

Under the label "Art Projects," specially commissioned art pieces were on display in public space from around the Madinat Arena down to the beach. The mutual fund Abraaj Capital has now offered a prize to provide five artists from the Middle East, North Africa, and South Asia the opportunity to create works, supervised by established curators, for the next Art Dubai in 2009.

Another special project of Art Dubai was a Pakistani pavilion with works by 11 artists and one group work, curated by Salima Hashmi and coordinated by Salma Tuqan, titled "Desperately Seeking Paradise". More on this in a separate article.

With the Global Art Forum, in 2007 the Art Dubai already created an interesting platform for the exchange of thoughts, conceptual considerations, opinions, information, and networking. For some of the visitors, the 5-day event this year may have been an important reason to travel to Dubai in the first place. On the first two days, the focus was on private and institutional support for art; later themes were art and artists in public space, the preconditions for producing art, the museum of the future, art institutions and the Middle East, etc.

START, the program for art education founded in March 2007 by the Art Dubai and the Al Madad Foundation, was implemented during the art fair. At first until 2010, visual artists in the Middle East will carry out workshops to foster children’s creativity and introduce them to elementary aspects of art and contemporary creation in art.

Dubai is still a long way from deserving the title of a world art center, but the city already offered many art exhibitions and events alongside the fair. The Dubai International Financial Centre (DIFC), which owns 50% of the Art Dubai, held the "Season of Arts" in its headquarters in the Gate District. Here, larger installations and exhibitions were on view, including a showing "Word Into Art" (modern art with text and calligraphic means) of the British Museum in London, curated by Venetia Porter, [2] and a selection of seventy works from the JP Morgan Chase Art Collection by renowned international artists.

The Flying House made a surprisingly strong and professional presentation in a double exhibition in two foyers of the DIFC. Some of the most important artists of the United Arab Emirates are brought together in this private art organization and gallery. The seat of The Flying House itself is brimming over with art from the early 1980s to the present, including many early works and actions of Concept Art and Performance. Art experts visiting the Art Dubai, in particular, regarded it as an insider tip and attended it accordingly often.

As in the previous year, in 2008 the Creek Art Fair (CAF) was staged simultaneously with the Art Dubai . In 22 traditional houses in the historical Bastakiya district, commercial galleries offered a selection from their inventory and gave institutions, organizations, and magazines a glimpse of their work. More than 25 artists had been invited to show installations or other works in public space and in buildings. The whole event was organized by XVA with financial support from the Dubai Cultural Council and individual sponsors. So the CAF cannot be described as an "alternative" to the official event; there was some overlap with the program of the Art Dubai, not only in the art, but also in the events. Plenty of interesting things could be discovered in the twisting alleyways and restored or reconstructed buildings and courtyards, provided one refused to allow one’s overall impression to be spoiled by the plethora of provincial wares. More on Creek Art Fair in a separate article.

With the second edition of the art fair, Dubai has probably established itself as an important international trading site for contemporary art. Since the continuing expansion of the Art Dubai is being carried out with very official support, the potential behind it is unlimited. But this alone would hardly be enough, if this potential were not used intelligently and with great professionalism – as it is in this case. Part of this is the recognition that using such an engine to enhance culture and art in the city and the region is not only an additional philanthropic, image-polishing task, but over the long term can also definitely result in economic added value. 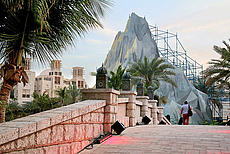 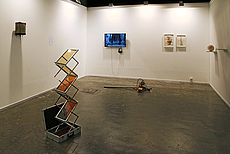 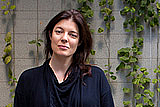 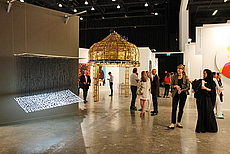