His artistic language ties together personal worlds of life between Syria, Beirut, and Berlin. 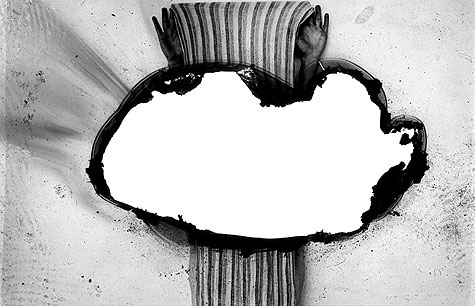 Ali Kaaf’s paintings, photographs, and films are interconnected by conceptual processes and internal structures that communicate with each other. In his artistic language, he ties together personal worlds of life between Syria, Beirut, and Berlin, where he studied under Marwan [1] and Rebecca Horn at the College of Arts.

His works seem primal and archaic, to which the use of elemental means, like fire, contributes, but they also permit a very contemporary political reading. It is a game with codes and archetypes, with signs and the question of their arbitrariness. The point is the question of form and its appropriation, of power, and on the other hand of reception.

For painting, the concentrated use of black as a color – or better: as an artistic working material in the form of charcoal, pigment, soot, ink, and graphite – means an irrevocable occupation of the surface without free space for pentimenti. Ali Kaaf’s approach goes beyond the surface into space: a black figure is painstakingly processed with gleaming graphite stick, producing diverse structures, faktura.

The work thereby has the effect of a palimpsest, an appropriation by writing over. But here is revealed the complex game with artistic codes and signs: the significated may lie somewhere very different, in a discourse on the meaning of the medium itself, on the possibility of space in painting and thereby on opening up to the viewer’s space of experience. This mode of reading, not completely clear at first glance, is reinforced when one views the black "fire pictures" whose archaic, dark forms are broken up in the middle by the targeted application of flame power. The black ground points to the haptic spatiality of these actually quite simple works on paper.

What is there when there is nothing anymore? What was there before there was something? Existential, epistemological questions that occur to one when viewing these works. Black holes? Expanding matter? Perhaps we see ourselves confronted here with complexes of problems that have to do with the fundamental issues of humankind against the background of the scientific knowledge of the 21st century.

And indeed, Ali Kaaf’s works are an exploration of the limits of the controllability and the inherent power of matter. In the struggle with material, the space of breathing and thinking arises that the French poet Stéphane Mallarmé saw in the blank piece of paper, the paradigm of the modern production of art. Mallarmé adjudged that the ellipsis, the interval, was "the essence" – the projection screen of the recipient. We find precisely this in Ali Kaaf’s fire works and even more so in the large-format black-and-white photographs.

The latter offer a key to reading the complex oeuvre: here we are dealing with human figures whose individual facial features are concealed. Against the empty, bright background, they are like living sculptures, frozen for the moment. Ali Kaaf processed these photos with fire, as well, and extinguished the spot where a head can be expected. What remains is a grotesque, sooty hole – an image that Kaaf in turn took a photo of. The result is a primal image of a mental void, very poetic and yet brutal: is this the extinction of free thought? Or what enables it in the first place?

Like all of Kaaf’s works, the photographs, too, oscillate between beauty and the abyss, between elegance and violence. It is as if Kaaf had overstretched the dictum of the Russian Constructivist and film theoretician J.N. Tynjanov: "Basically, photography deforms every material." [2] The idea of photography as document was already given the lie during the American Civil War, in which the dead were rearranged as "more beautiful corpses". Here, Kaaf creates his own "documents", which logically lead to the medium of film. Ali Kaaf’s cinematic play of forms recalls the experimental films of the Russian Constructivists who set out at the beginning of the 20th century to unite form and aesthetic experience with life. With Kaaf, it seems like a reflection on what form can say today about utopias, which seemed to have abdicated since the 1968 student revolt, at the latest, and which are now taking on new, questionable significance in the form of resurgent ideologies in East and West. But at the same time, each work is also an experimental arrangement, the sign of a sensual pleasure in creating states of tension, whose vibration Ali Kaaf regards as the real "result" of his – in a new sense of the term – "open works of art".

Art historian. Works as a curator and author in Berlin, before in Paris and New York. Co-founder of the interdisciplinary support network Contemporary Arts Alliance Berlin (CAA). 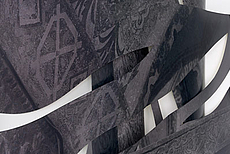 Photomontages based on images of details at Hagia Sophia in Istanbul. C & K Gallery Berlin, 21 April - 26 May 2018.