The artist and curator is a key figure in the emerging experimental art scene in Saudi Arabia. 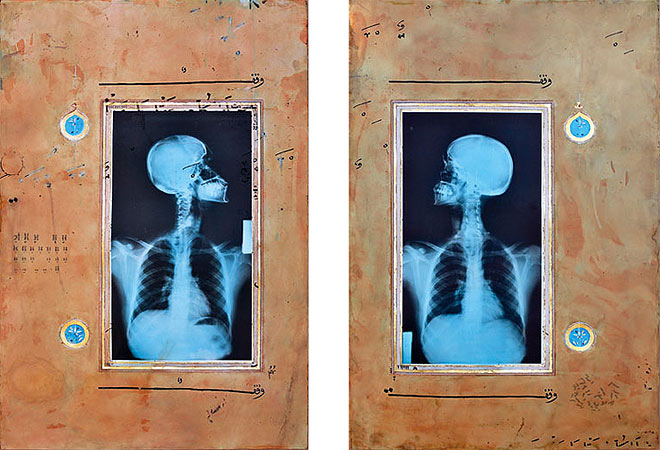 Ahmed Mater is one of the rising stars of contemporary art in Saudi Arabia. He is also a man of many masks. There’s Mater the doctor, the fully qualified General Practitioner employed in a hospital in Abha; Mater the landscape photographer whose photographs have been exhibited widely and compiled in a limited edition book; or Mater the face of Saudi mobile phone company Mobily’s latest nationwide advertising campaign. Then there’s Mater the contemporary artist, one of only two from Saudi Arabia included in the British Museum’s Word into Art exhibition and the Sharjah Biennial 2007. Mater is also co-curator and one of the key participants in Edge of Arabia, the first comprehensive exhibition of Saudi contemporary art in London. It opened on 15 October 2008 in the Brunei Gallery.

In May 2008 I interviewed Ahmed Mater in his studio in Abha, capital of Aseer province in the south of Saudi Arabia. This is where Mater grew up and is a place that has had a significant effect on his identity and artistic output. His collective of young, like-minded artists is called Ibn Aseer, meaning ‘son of Aseer’, and Abha, his hometown, is quite unlike other Saudi cities. It’s more rugged, the roads wind round rocky outcrops, there’s more colour, more trees, some pregnant with blossom, you’ll see men wearing their hair long with the fabric tied roughly around their heads in a way it would not be up in Riyadh. The architecture is different too, being born of an older tradition that owes various motifs and structural mores to nearby Yemen. Crucially, making art has a richer provenance in this part of the country. Mater’s mother, for instance, is an artist in her own right and makes indigenous Aseeri designs over the interiors of Mater’s home.

We meet in Mater’s studio. Born in 1979, he’s bright and thoughtful, and an unlikely mixture of influences and drives. His iPhone rarely leaves his hand; if it does it’s to be replaced by a Cohiba no. 1 cigar. Some days he’ll wear jeans and a shirt, otherwise he’ll be in traditional thob, ghutra and egal. He builds his own websites and has a good understanding of marketing and promotion, yet at the same time he comes from a traditional Aseeri family and remains rooted in this culturally.

Ahmed Mater’s work encompasses performance and installation, as well as work on paper or canvas. For the latter, it’s his experience as a Saudi and a doctor that’s significant. Some of his best known works feature X-rays discarded from his hospital, perhaps they were out of focus or aimed at the wrong area. Often he’ll work paint onto these X-rays or add text including passages from Gray’s Anatomy [1], poetry, or religiously orientated quotations. This is part of his ongoing attempt to explore the relationship between divergent perceptions of the human body. By so doing he’ll off-set scientific empirical analysis with spiritual speculation. This X-Ray motif is also an allusion to human commonality, something that is clear in Illuminations, his chief contribution to Edge of Arabia.

Henry Hemming: How did you make Illuminations?
Ahmed Mater: It is designed to be like the opening pages to a religious text. But much larger. Originally the craftsmen would always spend a great deal of time on these pages. They’re the first thing you see. Instead of a traditional geometry I have printed two facing X-ray images of human torsos. I prepared the paper using tea, pomegranate, coffee and other materials traditionally used on these pages. By using them you ensure that when you come to paint onto the paper it will have an extraordinary luminous quality – the paint will truly shine. And that’s what I want to do with this piece, to illuminate. I am giving light. It’s about two humans in conversation. Us and Them. Dar a luz. So many religions around the world share this concept of giving light, not darkness. It is one religious idea that has reached mankind through many different windows.

HH: Your most recent solo exhibition was opened by HRH King Abdullah of Saudi Arabia. During his speech he said that young people like you were an essential part of Saudi Arabia’s future. What is the role of the artist in Saudi Arabia today?
AM: To reflect what’s happening around them. Not to reflect what people already know. At the same time it’s important that today’s artists don’t pander to what a Western audience wants to see. Over the last decade, with the rise of the internet and satellite television many Saudi artists have been exposed to the global media, which can be good and bad. Instead of making political art, or art about science or religion, it’s important to include everything that surrounds you, and not to construct mental partitions in your head.

HH: Which artists have influenced you most?
AM: Basquiat right now, although I’ve only recently come to his work. Basquiat wrote all of Gray’s Anatomy in one of his pieces, just as I did, unaware of him, in one of my early X-Ray works. I like Gandhi also, although perhaps he is not an artist. I like the power of expression that comes out of just doing something. Not talking but doing. I like Forrest Gump in this respect.

HH: You’ve got one of the largest libraries I’ve seen in Saudi Arabia, where do these books come from?
AM: Mostly the internet. That has changed everything. Also there’s so much to read on the internet about art. And for me, reading is the most important thing you can do as an artist. It brings balance to your mind and body.

Writer and artist. He has published three books and has exhibited throughout the Middle East and Europe. 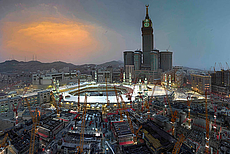 Statement by the artist about his project focused on the rapid urban development in the holy city of Makkah.