About the film Beket (Bus Stop) by the Kyrgyz cineastes, a puzzling fable about human relations. 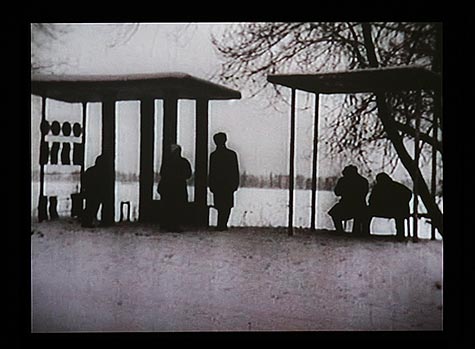 Aktan Abdykalykov has said he became "intoxicated by cinema" in the early 1980s, when his home country of Kyrgyzstan was still part of the USSR. He studied in a state art academy, Kyrgyz State School for the Arts, where he underwent highly formal art training and then worked as an art director at the Kyrgyzfilm Studios. He has made many short films and his features have been featured in several international film festivals, including his first feature Beshkempir (Adopted Son, 1998) which won one of the main prizes at the Locarno Film Festival in Switzerland, and Maimil (The Monkey, 2001) which was selected for the Un Certain Regard strand of the Cannes Film Festival.

The Singapore Biennale 2008 is showing Beket (Bus Stop,1995), directed by both Abdykalykov and Abdyjaparov. This film is finely composed and paced, with a cynical sense of the comedy of human relationships. Despite a soundtrack of amplified natural sounds, it is essentially a black and white silent film. A small group of people waits at a lonely roadside bus stop on a freezing cold day that overlooks a field or a frozen lake. Beyond that we see the grey shape of what could be a city, or a forest.

For the entire duration of the film the camera barely moves closer to these figures, and they are silhouettes to us most of the time against a bright background of snow and sky. The film regularly cuts to the opposite view of the busy nearby road to mark the passing of time. Indeed, time does pass; how long do these people wait? The Kyrgyz-Russian title becomes an unintentional phonetic pun on the theatrical master of absurdity and non-action, Samuel Beckett. The way in which the ‘narrative’ of the waiting figures plays out does have a very stark, theatrical quality, particularly in the use of foreground and background space.

Strangers at first, a boy, an adult and an old man, are joined by a woman, and gradually, through the most simple and natural of gestures we see human bonds beginning to form. Then, an interloper enters the frame, a loud drunk with an ironic fondness for Michel Legrand’s theme tune to the film Un homme et une femme (1966). His presence causes the rest of the group to gather even more tightly into a unit, but when he hurls a pocket watch taken from one of them into the snow, they go and look for it, returning to the bus stop in what is seemingly a better state of understanding.

Abdykalykov and Abdyjaparov mention that the work is about stillness, infinite expectation and interwoven memories; that even with a loss of innocence, there is always hope. It is clear that they are also interested in exploring the relationships between the individual and the group, and the larger sociopolitical allegory that might lie behind such a seemingly straightforward fable of inclusion, exclusion and extremely unreliable bus timetables.

(Courtesy of the Singapore Biennale 2008. Text published in the event's guide)