On the in situ installation by the Egyptian artist Mahmoud Khaled at the 1st Biennial of the Canaries. 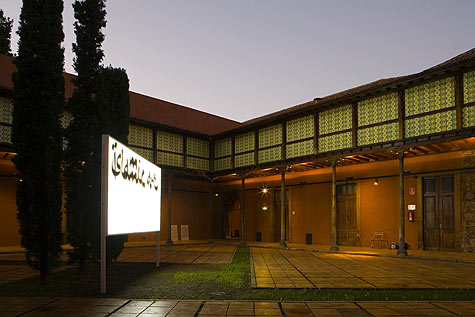 Introducing a new product calls for an entire corporate identity, targeting to reach and satisfy customers. The title of Alexandrian artist M.Khaled’s piece of work indicates an innovation. A compound word, a triptych, embraces a global "democratic" information and knowledge platform: Wikipedia; one of the monotheist religions: Islam; and a synonym for excessively and sentimentally charged objects: kitsch.

A patio on Tenerife, one of the Canary Islands, where the fusion of these very diverse spheres is tied in takes us onto the road of history. The quadrangle is part of St. Augustine Convent built shortly after the conquest of the Moors by the Spanish. It has a similar atmosphere to the open area inside a mosque – it separates the outside from the inside and offers a peaceful and calm space – a perfect setting for retreat and contemplation. Architecturally this space proves mutual influence of different cultural languages. Nevertheless, despite of hybrid manifestations and the knowledge about blending values and ideas reciprocally affected, resulting from travelling as well as from "globalised" technologies such as the internet and satellite television, there seems to be a very strong urge to divide things into their separate parts and to underpin the myth of linearity.

The re-introduction of the word "Islamic Art" by contemporary Western curators and theorists was set against terms of "Islamic terrorism" and "Islamic fundamentalism" following 9/11 and the implicitly growing interest in the "Islamic world". This interest subsumes mainly the Middle East, disregarding pivotal continental and regional differentiations. It also shows, that standards and paradigms are defined in the West to encircle "another" – who would set a body of work from Europe in a frame of Christianity, Islam, Buddhism, etc., if religion was not related to the contents of the piece? Living in close proximity to a mosque does not make a piece of work Islamic, neither makes the neighbouring church a work a Christian one. The trap of the description "Islamic Art" lies in ignoring the fact, that there is a difference between religion and culture, society and individual. The vice versa inflows offer cross references reaching beyond simple interpretation in retrospect, opposed to rigid limitations of ideals, thoughts and practices. Inversely the attribute "Islamic" experienced a new significance to distance oneself from everything "Western". However, the labelling from both sides does not do any justice to "naturally" growing developments and changes.

For his project "Wikislamkitsch" Mahmoud Khaled chose to collaborate with creative expert Mohammed Fahmy from Cairo, who is in charge of designs ranging from kitchens, coffee shops and stores to accessories. Placing traditional basic elements from oriental and Islamic background in a contemporary context Fahmy tackles new impulses for stylish moulding. For the given context of the in situ work Fahmy was asked to "decorate" the space. Fahmy decided in favour of a transparent foil with a variation of ornaments in green shades (green is the "colour of the Prophet", signifying life and fertility) to cover the windows overlooking the quadrangle. This kind of see-through foil in different colours and patterns, which are recognized as "Islamic", is cheaply produced in China. The low-wage economy enables any social class to satisfy nostalgia and to serve visual identity for a reasonable price. Furthermore, a billboard placed in the centre of the patio announces an "objective" explanation of "Islamic Art", which is taken from an Internet encyclopaedia, employing Latin letters generated in calligraphy.

This in situ intervention is not only referring to the seemingly obvious on the surface in consummate ease. Mahmoud Khaled’s skilful elaboration on various levels invites us to reassess assumptions. He is challenging the space and the audience to travel through history scrutinising nowadays context, playfully acknowledging the fact that he and the designer are both bearing Islamic names.

Artist, author and curator from Switzerland based in Cairo, Egypt.