Analysis of developments along the Gulf: A Guide, a Survey, an Agenda. Book review. 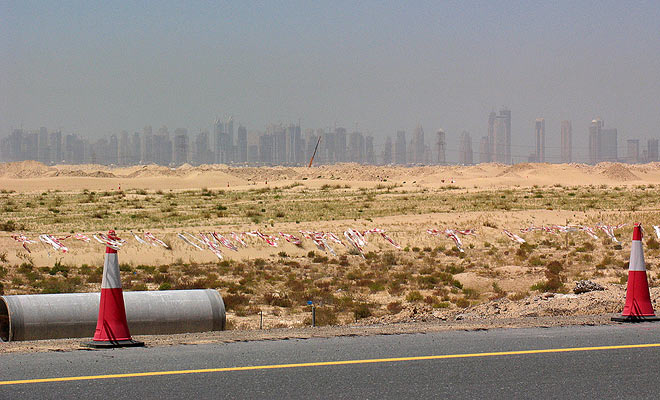 In recent years, Dubai-mania has transformed from a curiosity tickling at the edges of Western public consciousness to an inescapable phenomenon in popular media. Readers and viewers of a litany of publications and television outlets have been introduced to commercial developments in Dubai, each more unbelievable than the previous. Artificial islands, indoors ski-slopes, rotating high-rises, underwater hotels, the tallest building in the world, the largest amusement park are all currently proposed or under construction in this rapidly expanding city.

Volume 12: Al Manakh is the latest offering in the Volume series - a theme-based collection of architectural and cultural criticism founded in 2005 by Ole Bouman (Director of the Netherlands Architecture Institute), Rem Koolhaas (principal of Office for Metropolitan Architecture and its publishing wing, AMO) and Mark Wigley (Dean of Columbia University's Graduate School of Architecture, Planning and Preservation).

Al Manakh is a tour de force investigation of the recent explosive economic growth in the Middle East, particularly in the Gulf region and Dubai.

Consuming any Rem Koolhaas-associated text can be likened to quenching one’s thirst with a fire hose. Both the volume of information and the method of presentation preclude the possibility of "reading" Al Manakh in any conventional sense. The Arabic term Al Manakh (meaning "the calendar" or "the climate"[1]) is the etymological root of the English word almanac. As with an almanac, this text is a source of reference presumably not intended to be read in a linear fashion. It is not, however, merely a reference guide to the region - it contains a series of capsule critiques, journal entries and interviews with influential members of Dubai’s development community that begin to make sense of this Byzantine environment.

The strength of the book resides in its comprehensive presentation of research into the Dubai and Gulf phenomenon, particularly found in the Gulf Survey section of the book edited by AMO. This section presents a visual encyclopedia of the region’s built history, as well as a documentation of future developments and a socio-economic analysis. Some of the usual demographic statistics (e.g. GDP per capita, youth, illiteracy) are rendered with eye-catching graphics along with other less expected ones (e.g. degree of perceived corruption). One chart in particular can’t help but cause reflection: "How Much is a Billion?" Among the expenditures shown in the chart are, Palm Jumeirah ($14 Billion USD total cost), total cost of all construction projects in the Gulf ($675 Billion USD), and direct US spending on war in Iraq ($700 Billion USD).

Not surprisingly, Al Manakh is rife with the kinds of quality control issues commonly found in deadline-based publications like magazines or journals (e.g. typos, formatting inconsistencies, even pixelated photographs taken from moving automobiles). Some, if not all, of these issues are a by-product of the editors’ intentions - by analogy, the sort of looseness of line one allows for in quick sketch drawings. As with a sketch drawing, the emphasis behind the book seems to favor a holistic documentation of impressions and ideas over the craft and quality of the individual line.

Another weakness of Al Manakh is in the criticism itself - not the capsule critiques individually, but in the comprehensive presentation by the editors. This editorial stance vacillates between "objective" presentation of facts and the sort of willfully benign assessment of the Dubai phenomenon expressed in Rem Koolhaas’ "Last Chance" introductory essay.[2] If the reader accepts Koolhaas’ rosy assessment of the region’s existing conditions and potential at face value, it is hard not to assess his contributions to Al Manakh as something of an apologist text. Does he believe his own social critiques, or are they merely by analogy a Trojan horse - a tactical method of secreting his Achaeans inside the gates of Troy?

Koolhaas has seemed to use this Trojan horse strategy in the past. In his earlier "Beijing Manifesto,"[3] Koolhaas post-rationalized the efficacy and appropriateness of his CCTV Headquarters Beijing high-rise - referring in deadpan fashion to a China that is "characterized by the need to spread opportunity and information," while ironically throwing "the backward-looking US" under the bus.

How can a Western architect gain a commission in places where Western values do not always completely align with governments that hold the keys to development opportunities? The answer is certainly not to antagonize those governments with sharp social critiques. In the best case scenario, the resulting built project might itself be a subversive critique of the local conditions.

The inclusion of an "Open Letter to Rem Koolhaas," by Ilka and Andreas Ruby towards the end of Al Manakh might be interpreted as a winking acknowledgement of this assessment. In reference to a previous competition in Russia, the Rubys speculate that perhaps Mr. Koolhaas chose to use the role of the court jester, "a position of empowered weakness," as the only means "for the architect to still make a critical contribution."[4]

The best of the book is the slick packaging of eye-opening statistics about the Gulf and a series of amusing anecdotes that represent a year of travel to Dubai for Reinier de Graaf (an OMA partner). The worst of the book is the tepid critique of social and urban conditions in the region. It would be disingenuous to argue that the book is solely a realpolitik approach to dealing with Dubai’s development milieu - that is, using the propaganda machine against itself. The text has much to offer the reader seeking an initiation into Dubai’s frequently phantasmagorical urban environment, and it represents an enormous amount of effort on the part of very talented thinkers and designers. The determination of what it all means is in the hands of the reader.