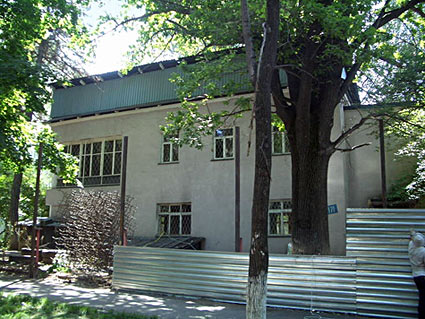 Seventeen years later after achieving its sovereignty from the Soviet Union, Kazakhstan is known to the world mostly through its oil reserves, and recently through a lucky or unlucky reference of a certain British comedian. In this overview of the Soros Center for Contemporary Art – Almaty (SCCA) in Kazakhstan, I look at its functions vis-à-vis other cultural institutions in the country as well as how it has negotiated with the Soviet traditions of art. Now, it is an especially urgent moment to draw attention to the work of the SCCA because its activity is under jeopardy. The building that it used to occupy for the past nine years has been taken away by the city engulfed in the construction boom. This move undermines the community that the SCCA has built from its home on 171 Tulebaev Street.

The Soros Center for Contemporary Art – Almaty has been first established in 1998 as one of the Soros Open Society Institute initiatives to support and promote contemporary art in local settings. Such centers were established in seventeen countries in Central and Eastern Europe and the former Soviet Union, tells Valeria Ibraeva, the director of the SCCA, in an interview. The Center in Almaty has been the only one for the entire region of Central Asia.

The SCCA was the first organization of its kind to support arts and culture in Kazakhstan – it is non-governmental and non-commercial. On the one hand, it is independent from the state; on the other hand, it is not concerned with making profit, unlike many local art galleries that survive by selling artwork. The Center has creatively funded its activities by applying for various grants provided by international organizations.[1] This allowed the SCCA to promote art that was organic but also non-traditional.

Besides promoting and exhibiting local artists’ work at home and abroad, the Center for Contemporary Art is also active through its educational activities (only recently, the SCCA hosted a group of CEC ArtsLink (USA) representatives who shared their views on public art) and as the community center for people interested in arts and culture. The online archive of the SCCA [2] shows the number of workshops and meetings they conduct each year. Speakers range from art managers who share their experience of raising funds for cultural events to art practitioners who provide hands-on experience of video editing or work with graphic design software. Along with the education of artists, the SCCA is also involved in the education of general public about ‘contemporary art’. Through their continuous and scrupulous work and interaction with journalists in Almaty, they convey the message of artists to the broader audience. Today, the exhibitions of the SCCA are among the most widely covered art events by mass media (TV, newspapers, and Internet) in Kazakhstan.

The SCCA serves as the single remaining active community center for artists in Almaty today. It is the major point of destination in Almaty for anyone who’s interested in arts and culture. Many people will most likely point out that the SCCA is the only place where they can just come and hang out. Not only artists but different people from various walks of life: old and young, rich and poor, of various religious identifications and political beliefs can meet each other at the same time. No matter what time of day you come by, there are always people in the building – leafing through art magazines and catalogues (the SCCA has the only public art library in town where you can actually browse through literature) [3], working at editing a video-clip or constructing an installation, or just talking. In fact, many creative productions have come out of the personal encounters originated at the Center for Contemporary Art.

Through these practices and activities, the SCCA has involved itself in the processes of redefinition and discursive production of a new role for the artist in society. During the Soviet period, the socialist state employed the artist to perform the task of propaganda – artworks were supposed to teach masses about new socialist consciousness, about how to be citizens in the new country. Many avant-garde artists became drawn by the state (and disillusioned later), among them Kuzma Petrov-Vodkin, Kazimir Malevich, Aleksandr Rodchenko and others.

On the one hand, the SCCA opposes this old model of artist as an ideologue because their art came out in the form of lies. As Ibraeva describes the Soviet-era art, "Then, the artist taught how to lie, consistently and properly. He would see the starvation and the repressions of 1937 but make paintings like Gerasimov’s Collective Farm Celebration or Kasteyev’s Collective Farm Toy (Kazakh for feast). [4] At the same time, they were supposed to tell the truth but in the academic sense. That is, that "truth of life", in case of not fitting into ideological schemata, would have to be fixed. That was the meaning of Soviet art – the creation of 'necessary truth'." Furthermore, she resents and resists the government as the authority which tells artists what to do and how.

On the other hand, however, the SCCA still supports the idea of artist as the figure of moral authority – as an autonomous truth-seeker, as an independent barometer to the social and political environment. The artist should not be at the service of the government and neither of the corporate sector. Yet, the state and society should appreciate such functions of art and artists and provide them with support without any strings attached. Artists have a broader vision, which should not be clouded and constrained. In return, artists will creatively help the society at large to reform and develop. Thus, the SCCA imagines the new role of the artist to combine social responsibility and financial independence; only time can show how this vision becomes realized in Kazakhstan.

PhD candidate at the department of Anthropology at Stanford University (USA). Her dissertation research subject concerns the transformation of the art community in Kazakhstan after the Soviet period.