The Iraqi artist locked himself in a room and lets Internet users shoot at him with a paintball gun. 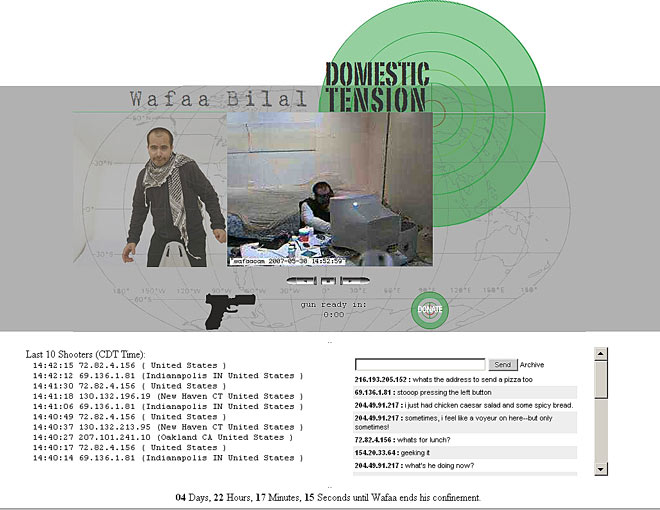 Some time ago, there was quite a stir over a Texan’s idea of offering people the opportunity, via the Internet, to use a remote-controlled rifle and cameras to go hunting and to shoot at real animals. (The first animal has been shot online [1]). There was a swell of disapproval of the civilian implementation of this military practice of hunting down humans from a distance using drones or other robots. In many U.S. states, laws were passed forbidding the Internet hunting of animals (killing from a distance [2]).

After it was also banned in Texas, John Lockwood shifted to Internet paintball [3], but does not seem to have had much success with it. Wafaa Bilal, an artist from Iraq, may have taken inspiration from Lockwood’s interactive Internet installation. At any rate, for two weeks, Bilal has lived day and night in a room of the Flatfile Galleries [4] in Chicago with a paintball rifle and a web cam aimed at him continuously (the video diaries can be found here [5]). The "exhibition" enables Internet users to take part in a kind of Milgram experiment, because whoever wants to can shoot at the artist with the rifle. This cannot really injure him, but the gelatin pellets do cause pain when they hit his face. But the viewer can also contact the artist in a chat.

Bilal actually planned to name his installation "Shoot an Iraqi". But his gallerist thought this was too direct and too political. Now it has the more reserved title "Domestic Tension" [6] but still makes very clear the intention of the artist, whose younger brother was shot dead by an American soldier in Najaf in 2005. Shortly thereafter, his father was also killed. Bilal’s media project with its high level of personal involvement is an eminently political work as a critique of the Iraq War and its consequences, but at the same time it raises important questions about the relationship between proximity and distance and between reality and virtuality and is a typical form for acquiring attention, a resource that has become scarce in the media-determined attention economy.

With his art action, Bilal will draw attention to the everyday threat to people in Iraq after the invasion by the Americans and at the same time blaze a trail for an art that makes the traditionally distanced viewer into a participant in a way familiar from computer games. But the life that Bilal is leading for a month imprisoned and under surveillance in a "container" has nothing to do with the familiar reality TV programs; rather it reveals the situation that has dominated the lives of many Iraqis for years. Because of the danger threatening with every step, they avoid leaving their apartments and houses when it is not absolutely necessary. He says this is how his family, which has no way of leaving the country, now lives in Iraq. For this reason, he wants [7] to be closer to and support his family and the people in Iraq.

Bilal has renounced sound [8], in order to be as far removed from the Internet user as the Iraqis are for the Americans: "I want it to be far removed. I want it to be video game-like. That's how we see this war, as a video game. We don't see the mutilated bodies or the toll on the ground."

But Bilal himself hears when shots are fired and the pellets splatter against the wall.

Bilal was born in 1966 in Baghdad and grew up in a Shiite family there. Although he already wanted to become an artist at that time, he writes, he was forced to study geography. But he also created pictures during his studies. They were critical of the Hussein regime, so he was arrested several times. After the Gulf War of 1991, when then-U.S. President Bush promised to help the Iraqis if they toppled Saddam, he took part in the resistance. Before the war broke out, he avoided being drafted and fled to Kuwait. From there he was expelled to a refugee camp in Saudi Arabia, where conditions were terrible, and from there he finally managed to reach the United States in 1992. Since 2001, he has taught at the School of the Art Institute of Chicago.

People do not necessarily aim the paint ammunition at Bilal; sometimes the only shoot at the lamp, the bed, or the wall. Thousands have already pulled the trigger. And that’s how the room looks; originally clean and white, it is now a dirty yellow. A broad stripe on the wall runs around the entire room where the paint hits; the rifle can be moved to the left and right, but not up or down. Thus, when Bilal lies on the bed and tries to sleep or walks in a crouch, he cannot be hit. In the room, the artist can also protect himself with plexiglass shields. The camera cannot really be operated anymore when two or more Internet users try to control it at the same time. Then they struggle among themselves, whereby the camera swings back and forth with the rifle.

When Bilal moves out of the protected space – out of his Green Zone, so to speak – and into the field of fire, the Internet viewers appear to fire away: "Some of them are very obsessed, like in hunting mode. They will just sit until I make a mistake."

Do the riflemen only want to play? Do they understand the hunt as a computer game, even when they are shooting at a real person? Is it fun to finally no longer be aiming only with virtual weapons at virtual figures, but, from a distance and protected by the anonymity and out of the darkness of the Internet viewing space, to fire a real rifle with real, if only paintball munition at a real human? Are emotions involved here that have to do with the war in Iraq? Do distanced viewers in fact become involved participants who emerge from their passivity not only as recipients of art, but also as political subjects?

It can also be asked what this kind of shooting gallery that extends from the virtual space into real space triggers in people. Will they be roused to work to end the violence? Or will they be encouraged to violence? It is still almost a computer game in which almost nothing can happen. Or is Bilal’s media action perhaps the template for a "snuff" installation in which, for money, the Internet users can shoot live ammunition at a prisoner?

Bilal, at any rate, said on the 13th day of the art project planned to last six weeks: "At this point, I look forward to when this gun is silent and when all the guns are silent."

Born 1953 in Munich, Germany. Author, publicist, media theorist. Since 1996 he is chief editor of the online magazine Telepolis, which he co-founded, and publisher of the Telepolis book series at Heise Publishing.

Published with the kind permission of the author and the online magazine Telepolis, where the article appeared in German on 21 May 2007.
http://www.heise.de/tp/r4/artikel/25/25324/1.html

The installation remains in the gallery until 16 June. On 16 June at 6 pm it will be taken down with help of the community. Everybody is invited.