On the work and experience of the Malaysian artist at Documenta 12 in Kassel, Germany. 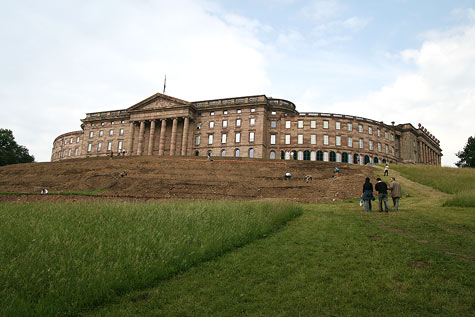 On the opening weekend of Documenta 12, Malaysian artist Shooshie Sulaiman talks quickly, tripping over her words as she walks through the Schloss Wilhelmshöhe, to where her Emotional Library is locked away inside a vitrine. Shooshie is in a hurry to 'liberate' the two diaries that make up her work from their currently forlorn state in a corner of the grand Schloss.

This is a historic year for Malaysian artists at an international show like Documenta, especially when some in the Malaysian art world are also celebrating the country's half-century anniversary of its independence from British colonialism. While both Shooshie's and the more well-known Simryn Gill's works showing at Documenta 12 are located in the Muslim-dominated, multi-ethnic experiences of Malaysian society, Gill pointedly does not identify her work as 'Malaysian' but rather as a practice originating "in the tropics".

Shooshie, by contrast, is acutely affected by what she describes as the problems of a Malaysian visual culture regularly compromised by a stultifying yet remote arts bureaucracy. As she makes plain in patois Malay in the lush park below the Schloss, Malaysia's true liberation from colonial aesthetics still seems unattainable, somewhat like the fate of her work at Documenta 12 this weekend. She's unhappy that her deeply personal work, which is like a part of herself, is "locked up" for now.

Although Documenta 12's selection of Shooshie Sulaiman was a surprise in Kuala Lumpur, fellow Malaysian artist Roslisham Ismail points out when viewing the show later that Shooshie is among the few Malaysians working with the relational art trope currently favoured by Western curators.

Shooshie admits her showing at Kassel has also been a rare triumph for a young Malay Muslim woman artist like her, who as an arts activist has curated several guerrilla-style shows in Malaysia which have challenged the arts establishment with impertinent questions about the legitimacy of cultural policy.

So it's ironic that she's applying such Malaysian experiences in navigating Documenta 12's own bureaucracy, if only because it helps speed up the late construction of a space originally promised for the showing of her work. She says her Emotional Library was conceived for a purpose-built space, rather than being displayed in a vitrine at the Schloss.

It's only two weeks later that the Emotional Library, which consists of two diaries named Anna and Botanical Garden, is finally 'liberated' from the Schloss and moved to a newly constructed semi-circular 'room' within the sprawling and much-criticised Aue-Pavilion. Shooshie is visibly happier as the diaries' contents, which tell of her friend's experiences in the late 1970s, can now be better understood as her visitors browse the hand-made books, conjuring up memories through touch, smell and textual readings. As Shooshie and her guests banter questions in what could be her cosy living room at home, well away from the stately formality of the Schloss, they draw random trails into her jungle of ideas.

"Whereas most of the spaces at Documenta 12 are typical of what you'd get at a big art show, the Aue-Pavilion is special for me - it's different and not a regular shape," Shooshie explains. "My work has to reflect a particular reality of where it's placed... I wanted to share the personal diary while at the same time I wanted the installation to be semi-open, not totally private. So the material (a shiny diaphanous curtain found along the pavilion's walls) surrounding the space was good, as you could see the silhouettes of those inside."

"My work is probably best known for being ephemeral," she says, "sometimes using water, rain, and text and language as mediums to locate my art. My works respond to the audience and the spaces they're in." As critiques of Nicolas Bourriaud's notion of relational art have pointed out, such works as Shooshie's rely on an audience to literally grapple with the work in a particular physical space before any indelible meaning can emerge. While Shooshie is enamoured of the process she forges with visitors, she admits the opportunity for contemplation can be overwhelmed - a conceit often criticised by sceptics weary over relational art's democratising claims.

For SentAp! magazine editor and artist Nur Hanim Khairuddin, Shooshie's current work follows an earlier controversial installation at her now-demolished shanty behind Malaysia's national gallery, the Balai Seni Lukis Negara, which questioned official curation policies and featured images of Shooshie's policy protagonists and antagonists stuck around the garden. It was the timing and intimate feel of that show, says Nur Hanim, which first got Documenta's curator Ruth Noack interested during her scouting mission to Malaysia last year.

Although Shooshie's idea of inviting curious strangers home isn't without cultural precedent, as it's a traditional Malaysian social habit to be warmly hospitable, to the extent of even opening up their homes and hearts to the public on festive holidays, the practice of showing art and its processes in private spaces such as a home is seldom done in Malaysia.

"Our art scene is still developing and is quite immature," Shooshie says. "But that doesn't bother me as much as our art world hierarchy and their amazing ambitions, which just don't connect with our reality - what we really still need are the small exhibitions, and serious and informed discussions about art and artists."

Although Shooshie explains her art as a process of "developing and educating your audience" in a society still growing its own post-colonial culture, her gestures are rooted in a democratising impulse. While instrumentalising art in this way to spark off public participation isn't really new - with such hopes previously promoted in everything from 1970s performance art to Beuy's remark that "everyone is an artist" - Shooshie's idealism is her bulwark against a complacent Malaysian art world seduced by traditional corporate demands. But sadly for her, many Malaysians after 50 years of independence remain unconvinced that they too should be artists shaping their own post-colonial realities.