23 artists from different countries created site-specific works in the village of Shatana, Jordan. 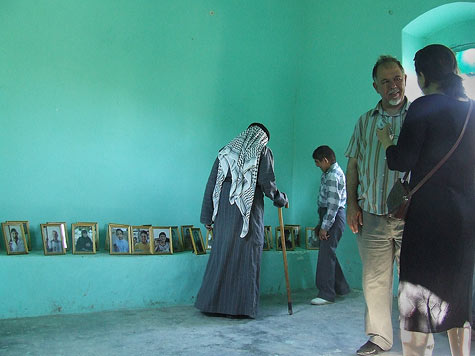 The Open Day buzz still sounds in my head. On the 20th of July, the Open Day concluded the two-week artist workshop at the village of Shatana north of Jordan. The event acknowledged the interactive and cooperative relationship between the artists, the location and the inhabitants of this old, half-abandoned, beautiful village. The crowd touring the site of the exhibited works brought hustle and bustle, transforming the serene streets and empty houses. In a country where contemporary art is still foreign, even – or rather, particularly – at centres of art and among makers of art, contemporary art in its various illustrations was at home in Shatana.

Shatana, International Artist Workshop 2007, is officially now part of the Triangle Arts web of workshops. Aimed at mid-career artists, these workshops bring together artists from around the world to exchange and engage in dialogue, because such artists mainly work alone. This is the first time an event like this has taken place in Jordan. A site-specific, progress-focused, contemporary art-based intimate meeting of artists, both international and local. Over a year ago, artist Oraib Toukan, inspired by her participation the AIWA workshop in Aley, Lebanon, came back to Amman with Triangle Workshop fever.

Oraib, Samah Hijawi, Ola Khalidi of Makan and I started meeting around June of last year. Alessio Antoniolli, Director of Triangle Arts Trust & Gasworks; Gill Ord, co-founder of Braziers, an annual workshop taking place in Braziers, England; and Ghassan Maasri, organiser of AIWA workshop in Aley, Lebanon came to visit in July 2006 to meet and discuss holding the workshop in Jordan and to locate potential sites for the workshop.

Eventually, research led to Shatana, a village left with 150 inhabitants, old stone houses and beautiful landscapes. Houses from the village were located to host the artists. As agreed with the owners, through the assistance of the local Catholic Church and the priest Father Imad, they offered their houses for the duration of the workshop in return for the renovation and maintenance work necessary to make these long-abandoned spaces habitable.

For two weeks, the artists shared meals, joined in impromptu dance parties, walked around the village, went on trips to the town nearby, talked about their work, discussed their ideas and helped each other develop their work. As the Open Day approached, the momentum increased; there was fever on the grounds. Despite the scorching heat, the crowds came in numbers that surpassed expectations by far, even the most ambitious.

The Open Day exhibit took the audience on a tour of a section of the village. There were about 32 projects, mostly work in progress, of art made by the 23 participating artists, from video to sculpture, spread around the village lands, on the church grounds, in homes, in old decaying buildings and caves. Generally the work revolved around several main topics such as the stone quarries behind the mountains of the village, the local nature and its forces, the relationship, intervention and interaction between the artist and the local inhabitants, the inhabitants of the village and their livelihood as well as the emigration from the village and its abandonment.

Work by both Max Mason, from the UK, and Saba Innab, from Jordan, dealt with the stone quarries. While Max filmed activity from the site and showed it, in a form of visual narrative, alongside an animated video of a dog, Saba placed wooden boxes through which one can see juxtaposed images of the mountain. For a performance that involved the inhabitants and visitors, Isabela Prado, from Brazil, designed colourful wearable parachutes for people to wear and run with the wind. Also exploiting the wind force was Lucas Di Pascuale's installation. He laboured to make the perfect windmill of discarded floppy disks to best work as aerodynamic objects moving with the wind, placing several on the rooftop of an old stone house.

Mahreen Zuberi from Pakistan created a series of eight images on how to "use" a donkey in the eight languages used as first tongue amongst the participants. A humorous take on the artists’ presence in the village as tourists as well as a commentary on their willingness and desire to communicate using as many as eight languages and succeeding. Batoul S'himi, from Morocco, recreated a kitchen space in an abandoned house by documenting on video her interviews with Um Isa, an elderly woman from the village, famous for her cooking.

Parallel to this workshop, Bahraini artist Waheeda Mulallah and Dutch artists Wouter Osterholt and Elke Uitentuis conducted a four-day cut-out animation workshop for the local kids. The resulting animation video was exhibited on the Open Day.

It was interesting to realise that, despite the stereotype, while some visitors from Amman, the capital and main city of "culture" of Jordan, where there are galleries and cultural events take place, were puzzled by this event and stood ill at ease in front of the installations and acts of intervention, the visitors from Shatana itself, in their Sunday clothes, related to the work, saw familiarity in it and interacted with it.

This workshop brought together 23 artists from many different countries. In two weeks, these artists got acquainted with the place, constructed relationships, envisaged ideas, discussed them and developed them and proceeded to create something. In varying degrees of development, the works presented the alternative perceptions of and feelings towards this meeting in regard to the group and the surrounding environment. This work is the work of these artists in this village, very context-based and site-related.

Studied architecture and interior design. She currently resides in Amman, Jordan, where she does art and writes.

Organised by the Work Group in cooperation with Makan House