Review of the first survey of contemporary Malaysian art exhibited in Australia. 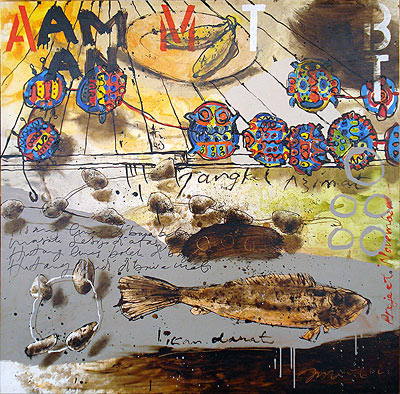 "Selamat Datang ke Malaysia" is the first survey of contemporary Malaysian art exhibited in Australia. Does it perpetuate the Government Tourism slogan 'Malaysia Truly Asia' or does this exhibition probe a vital emerging regional art scene?

Curator Beverly Yong, of influential organising gallery Valentine Willie Fine Art says, "It plays with the idea of contemporary art as cultural expo. We ask: How would we present ourselves to the world? How are we identified? How far is our real experience… a reflection of our ambitions?" [1]

"Selamat Datang ke Malaysia", translated Welcome to Malaysia, is framed as a hip snapshot of the Malaysian contemporary art scene as the country celebrates its 50th anniversary of Independence. Yong's catalogue essay introduces the show with a metaphor for first impressions, the "welcome arch" that crosses the Federal Highway as one leaves Kuala Lumpur International Airport. Inscribed with "Selamat Datang ke Malaysia", the arch is caught between a fun-park entrance, a homage to Malaysian architecture and a statement of Malaysia's devotion to Islam. Like so many things Malaysian, it communicates on many levels and is delivered with nationalist rhetoric, quickly filtered by locals. But how do non-Malaysians filter or translate such cultural icons and definitions of Malaysia?

This exhibition explores these ideas with balance and awareness of local sensitivities, but more importantly, it constructs an image of contemporary Malaysian art abroad.

The ten artists included were born after Independence. What that means is they are from a generation who grew up in a newly fabricated nation; their point of reference looks forward. What becomes apparent is a collection of artists who play up the contradictions, conflicts and striations that define contemporary Malaysia. Notions such as Malaysia's celebrated cultural diversity paralleling an increasing systemic segregation explored by Yee I-Lann and Vincent Leong; or the alert connection between landscape and architecture in defining national identity in post-colonial Islamic Malaysia through work by Nadiah Bamadhaj and Sharon Chin; and the blatant examination of Malaysia's socio-political fabric by Roslisham Ismail aka Ise and Wong Hoy Cheong, working to unveil the real Malaysia from a ground roots level exposing misdirected boleh [2] and fractured suburban dreams. Collectively, these artists move beyond parochial objectives and present a picture of an art scene that is aware, extremely capable and proving to be a serious regional player.

What of the work?
The exhibition can be broken into three loose groupings: Jalaini Abu Hassan, Anurendra Jegadeva and Sharmiza Abu Hassan – artists exploring traditional values, mysticism and superstition in contemporary Malay life and culture. The international set - educated abroad, exhibited widely and inclined to hang their work on Western rhetoric in developing a contemporary image – Wong Hoy Cheong, Nadiah Bamadhaj, Yee I-Lann and Emil Goh. And the younger artists in the group, Sharon Chin, Roslisham Ismail aka Ise and Vincent Leong who are 'negotiating today's Malaysia, its popular culture and changing social fabric' [3]

The work of Nadiah Bamadhaj is a strong inclusion. Bouncing back to the freeway arch 'introducing' Malaysian identity, Bamadhaj uses this same icon and transposes it to the remote surreal landscape of the Faroe Islands (the furthest northwest point in Malaysia) in her digital print, "I Bestow Upon You No. 1" (2006). She asks us to consider its translation: how does the meaning of a symbol shift when placed out of context or time? From this perspective, Bamadhaj's images offer a guide to reading this exhibition as a whole.

Her video "Beyond Recognition" superimposes text from Joseph Conrad's British Malaya novel, "The Lagoon" (1897) over a "European-ised" Malaysian landscape. She sutures two romantic abstracts, Malaya and Faroe, both ridiculously removed from contemporary Malaysia to provoke thought about institutionalised identity and the 'unnatural' state of contemporary colonisation.

Similarly, Sharon Chin's impressive installation "Pole Positions" (2007) offers a take on contemporary cultural translation. The viewer is faced with a pair of prayer carpets 'cut-out' in an architectural form. The immediate reference is a Mosque reaffirmed by the sound component of the call to prayer and video of minarets. One could mistake the carpet-form as a keyhole pointing to 'cultural/religious voyeurism', but slowly it is revealed they represent the footprint and spires of Kuala Lumpur's iconic Twin Towers not a mosque. It illustrates how easily translation can be skewed by (mis)understandings. It forces the visitors to kneel on the prayer carpet to put on the headphones, in turn altering their perspective, and pay homage to the minarets of Bumiputra [4] consumerism.

Shot on a mobile phone, Chin's use of technology adds another dialogue about Malaysia today. The piece fuses an icon of successful global Malaysia with the syncopated soul of the country, the call to prayer five times a day. What is an obviously clash is further complicated by its producer's non-Muslim Cino-Malaysian background. That Chin draws upon such intersections: the iconic towers, technology's participation in contemporary Malaysian life, the ever presence of Islam and the rhetoric of Western installation, explores the notion of 'perspective' from many different perspectives. This is a smart work by a promising young artist.

Vincent Leong, Yee I-Lann and Emil Goh also chose this thread of societal layering to flesh out work for Sydney, playing off the constructs of multi-culturalism against assimilation. In Leong's video "Run Malaysia Run" his characters wear the costumes of race, defining ones place in the system of things. Mounted on a 360-degree rotating platform, the video's motion plays on the idea of society's 'tread-mill'. The character's jog in a kind of military march; their pack-mentality void of direction, reaffirmed by the video's loop. Even though clearly defined as Malay, Chinese, Indian, Iban, Kadazan or Nyongya, the individual is absorbed by the stronger element, the mass. Pared down it is an erudite picture of contemporary Malaysia.

What is lost / What is gained? is a recurring question posed by the artists in this exhibition.

Conclusions…
The singular disappointment to this exhibition is it won't travel beyond Sydney. It gives an accurate read on the current scene and defines a 'Malaysian flavour' as an attractive curatorial export. There are omissions however that raise questions: such as artist from the important collective Mata Hati like Hamir Soib and Ahmad Shukri Mohamed or Paiman's political drawings or new media installations by Sau Bin Yap and Nur Hanim Khairuddin, but then this is a 'VWFA expo', 9 of the 10 artists included are represented by VWFA.