Managing Utopia. Can the new arts and education center in Istanbul realize its grand ambitions? 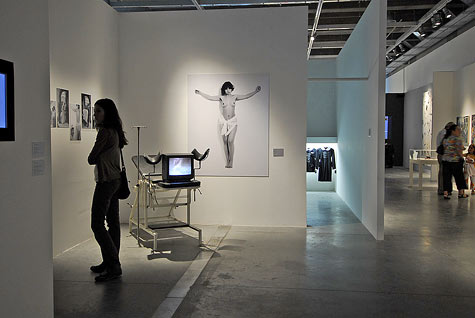 The former Silahtarağa Power Plant is a colossal structure located on a curve of Istanbul coastline known as the Golden Horn. In its reincarnation as Santralİstanbul's main facility, the old industrial building houses a new Museum of Contemporary Art. Though it officially opened on September 8, 2007, much of the campus is still under construction. In addition to the museum, it will eventually house university classrooms and departments, a Museum of Energy, a public library, a park, multiple cinemas, a dance hall, open air performance spaces, a multipurpose tent, restaurants, a shopping street, and artists' residences. Promotional materials distributed before its September opening tallied "some figures" for the as-yet-unopened campus – "Total area: 118,000 square meters. Museum of Contemporary Arts: 7,000 square meters. Museum visitors: 1.5 million people per year. Residency program: 1,000 artists, architects, designers, thinkers, scientists, cultural professionals per year."

In the past, Bilgi University has opened campuses in down-and-out neighborhoods with the explicit goal of stimulating urban regeneration. With Santralİstanbul, Bilgi follows the model set by the Tate Modern museum in London, which spurred an increase in local tourism and general quality of life when it moved into an old factory space in a famously bad neighborhood. Santralİstanbul's choice of location also resonates with local arts programming: both the 2005 and 2007 Istanbul Biennials exhibited artwork in less well-known parts of the city.

But unlike these examples, Santralİstanbul is a university-affiliated arts institution, and the first of its kind in Turkey. Though a few other local universities support museums, none focus on contemporary art – nor do they involve such extensive programming. Director Serhan Ada points out why this is significant: for every arts project or event at Santralİstanbul, there will be a complementary critical academic program. For every artist it hosts, Santralİstanbul will bring in a researcher, scholar, or critic. This mission extends to the construction of the institution itself. "The fact this is an academic initiative motivates our potential partners," notes Ada. "They know we will be more experimental, critical, and analytical about building an institution."

Challenges have already been dealt with. An initial problem was a dearth of students. Then it became clear that Santralİstanbul's expenses, estimated at 30 million dollars, would surpass the 40 million mark. (Today, they near 50 million). In 2006 Bilgi, a non-profit foundation, partnered with the for-profit education provider Laureate Education Inc. (USA). The Turkish press hurried to point out that Laureate would bring in a large number of local and international students, as well as providing management, marketing, and technological support for Bilgi. Laureate Education Inc. hurried to point out that the transaction would not materially impact the company's immediate earnings outlook. The exact nature of the transaction remains somewhat murky – press accounts vary, and Dr. Ada himself noted that this "strategic collaboration" was not his area of expertise.

Out of necessity, Ada reverts to the future tense when speaking about the still-unfinished campus. Yet he also tends to speak about Santralİstanbul in sweeping, abstract statements, even when pressed for details. Does simply sending workers invitations to the Museum of Contemporary Art's opening really make them feel included in the process of founding Santralİstanbul? "Language is not necessarily a huge barrier when it comes to art," answers Ada. "There will be a lot of workshops going on."

The Santralİstanbul portrayed by Ada, and in promotional material, seems to exist in another dimension as well as another time. In this dimension, opening and running a public library that can serve 1,000 people at a time is less about administrative infrastructure or organization, and more an issue of ideals: "It is about the idea of the libraries being lived spaces rather than closed spaces," says Ada. "And pleasurable places, not just a place to come, borrow a book, and go back home. A place where you can have a nice and pleasurable time."

In July, Santralİstanbul filled three entire floors of its impressive exhibition space with various incarnations of new media art. On view were highlights from the collections of the Centre Pompidou (Paris), the Center for Art and Media Technology (Karlsruhe), and the Museum of Contemporary Art (MUSAC, Castilla and Leon). The exhibits ran for only two weeks – clearly a case of Santralİstanbul testing the waters of the Istanbul art scene. But the sheer size of the show, and the well-known collections it drew on, suggested that Santralİstanbul could be a significant presence in the future. Ada plans to continue working with international partners.

Santralİstanbul's inaugural series of events and exhibitions is now under way. Modernity and Beyond, which opened on September 8, features over 400 artworks by around 100 Turkish artists, from the years 1950 through 2000. Other programs related directly to the 10th Istanbul Biennial include a film series focusing on urban issues; artist talks; and projects by several local and international artists' initiatives. The recent conference Local Modernity, Global Expectations (September 12 – 15) invited "artists, curators, critics, and all people keen on art in general."

Santralİstanbul has its work cut out. The new arts and education center wants to transform the dynamic of the city by bringing a lot of people, and a lot of art, together in one place. Its success will be measured not only by the quality of the exhibitions and arts programs it produces. It will also be measured by its ability to foster communication between an estimated 1,000 residents, 1.5 million visitors per year, and the city of Istanbul – an undertaking of staggering size.

The exhibition features over 400 artworks by around 100 Turkish artists