Experimental workshops and first exhibition of contemporary art of Tajikistan in Dushanbe. 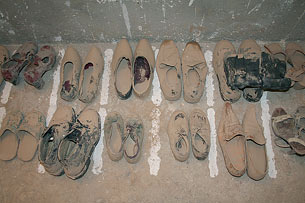 In 2005 a group of Tajik artists decided to carry out a pilot project "Starter" on relevant art for the senior students of art schools of Dushanbe and Khujand with the support of the Swiss Agency for Development and Cooperation. The main expectation was to create an art capable of influencing the passivity of social and artistic views of the society. This project (led by Sabzali Sharipov, as well as by director of curricula Larisa Dodkhudoeva, executive director Valimad Odinaev, and managers Manzura UIdjabaeva, Jamshed Kholikov and Gafurjon Juraev) became the first attempt to introduce innovative programs in the art educational process in Tajikistan.

The project developed stage by stage: theoretical seminars, practical workshops, and the final exhibition. The first stage consisted of such events as competition among the applicants for participation in the project in Dushanbe and Khujand, the preparation of dissemination and visual material and local experts’ holding of theoretical seminars on contemporary art of the end of the 20th century and the beginning of the 21st century. The following stages included the creative cooperation of the students with the local and invited advisers in a rural setting and preparation of the final exhibition "Parallel".

The project was developed in a format of an international cooperation. Four artists (J. Kholikov, M. Sharipov, B. lsmatov, S. Tuychieva) participated in the Biennial of Contemporary Art in Tashkent (Uzbekistan) and in a seminar on contemporary art in Bishkek (Kyrgyzstan); they made a considerable contribution to the development and realization of the project in Tajikistan. In addition, some students of the project took part in the exhibition "REAL Self-portrait" in Bishkek, where A. Rumyantsev was awarded first place and J. Kholikov an incentive diploma for his contribution. For the realization of practical seminars, well-known masters of contemporary art of Central Asia – Vyacheslav Akhunov (Uzbekistan), Yerbossyn Meldibekov (Kazakhstan) and Ulan Djaparov (Kyrgyzstan) were invited to Dushanbe.

The first exhibition of contemporary art of Tajikistan, "Parallel", was opened on May 12, 2006 in the building of the unfinished gallery of the OIimov State Art College. This was a creative result of the master classes of "Starter". The wide range of works submitted for the exhibition showed that photo art was the most popular among students, then installation, video art, performance, computer design, happening, collage, action and, last, kinetic composition and animation. Themes reflected the main relevant problems – political and ecological problems, drugs, AIDS, alcohol, a new sense of life, love and contradictions and parody judgement of traditional values.

In general, the exhibition "Parallel" managed to retain a national flavour, but in parallel raised acute, universal issues relevant to daily life, which is now extremely valued in art. Unusual for the national culture were the new kinds of art, which have already become a global language of geo-culture; these made the exhibition in Dushanbe different from others. The 21st century is a time of formation of a universal culture. As a result of globalization and achieved universalism in modern global society, mankind has a need for creation of a common meta-language. Tajikistan, ready to integration in the global art community, has already taken its start.

Ph.D in Arts and History. Chief Researcher at the Institute of History, Archaeology and Ethnography, Academy of Sciences of the Republic of Tajikistan.

(Introductory text of the exhibition catalogue)

Parallel
The first exhibition of contemporary art of Tajikistan

Art College of the Republic of Tajikistan

The exhibition was the result of the "Starter" project held between Sept. and Dec. 2005 in Dushanbe and Khujand, Tajikistan.