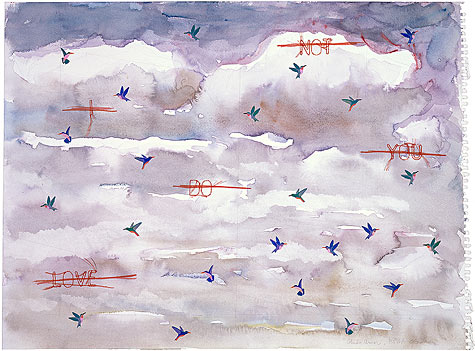 RFGA used during 2001-06. Their authorship lies with Amer but like much of her work, layered with meaning, this code is imbued with great significance; it acknowledges the collective process between Reza Farkhondeh and Ghada Amer.

RFGA collaboration was more a working harmony between artist and assistant. What has evolved recently is a mature synthesis in the work, apparent through their joint residency at the Singapore Tyler Print Institute (STPI), February 2007. This is not their first print project; one recalls lithographs published by Landfall Press in 2005. What makes the STPI project different, however, is its

The signature on these new prints liberates the

RFGA title; they are equally the work of Reza Farkhondeh and Ghada Amer. It is also the first collaborative project for STPI, expanding the studio's creative dialogue beyond master printmaker and artist and embraces their vision for the experimental and its translations into the print medium.

Amer and Farkhondeh met as students in France in 1988. Born in Cairo, Amer moved to France before New York. Farkhondeh followed a similar migration from Iran to France, then to the United States in 1995, where he reunited with Amer. This heavily hyphenated cultural status of an artist is, today, the darling of curatorial rhetoric. Charge that with societal-religious protocols when reading intersections between East and West, or an Arab-Euro-American disjuncture as with Amer and Farkhondeh, and you have a web of impenetrable layers. Amer and Farkhondeh have successfully navigated this landscape independently, and collaborative.

Farkhondeh focused on film in the early 1990s moving to an obsession with '99-cent culture' where he painted plastic toys with the opulence of salon portraiture. Eventually turning to landscape in 2002, his images sparked a sense of unrest or disconnection. This 'non-place' Farkhondeh described is the foundation for the STPI prints.

Their work intersected in 1999 when Farkhondeh abandoned art for four years hit by severe depression. Amer nurtured Farkhondeh's return, inviting him to apply her grounds. As their practice developed, Farkhondeh began to explore his own mark making, adding elements in a kind of 'unspoken correspondence'. In conversation at STPI he explained: "During depression I could not do anything. So when we began, for me it was just action. I was not even thinking. Ghada took the whole responsibility. She gave me a comfortable margin to work within." Ghada Amer added: "I used those backgrounds. As he got better things became more interesting. They developed my work and I decided to call them RFGA - to make them different. Last year I said to Reza, 'why don’t we do something really collaborative instead of this undefined

This dialogue remains central to the STPI prints. Just as histories or passions become dense with time, these prints are a tapestry of connection. They exist in a place between the individual psyche and a collective space, between genders and cultural frameworks. It is a place that belongs to neither artist, and often raw, invites the unexpected. What is it to share the intimate space of a drawing and how does one translate another's mark?

Reza Farkhondeh: "Before I got nervous and would ask 'which line, you have many of them?' Now it begins about the line and goes somewhere else. Now I care to dare, 'what can I do with the line?'"

Ghada Amer: "What is interesting for me is it forces me out of a system. From there I can discover new images. It's totally different from my own work. I think of it as a kind of appropriation. Each time he gives me something it is an appropriation - a found image."

Around the studio one observes remnants from the

RFGA works and their own signature images, but they're not simply regurgitated for Singapore. Farkhondeh's foliage takes on the tropical heat and density of Singapore and Amer's stitching is forced to take a more controlled expression, restricted by the scale and fragility of the paper. As one artist loosens and the other tightens, these works become incredibly cohesive.

A piece stands out with its fertile grove of trees rooted by dribbles daring beyond the edge of the page. Here Farkhondeh's brush usurps Amer's threads with similar confidence. Set against a deep orange sky and a flight of butterflies, it reminds one of the earlier works, "The Bugs and The Lovers" (2005). Initially seduced by the beauty of a Victorian-style botanical study, the viewer slips into a more subliminal seduction as the outline of a woman floats from the floral scene. What at first appears to be a woman masturbating slowly reveals to be a woman experiencing intense sexual pleasure with a man. This 'natural' desire echoes the euphemistic tale of 'the birds and the bees'.

The same connection can be drawn with "Pastel Lovers" (2005). Here the duplication of fornicating figures has the woven decoration of William Morris wallpaper. In the new work this sequential stamping is pushed deeper to the background. In one print Amer overlays a henna hand stencil above the erotic field, introducing another layer of sexual association and cultural mash. The stencil references traditional Chinese paper cutouts, Asian shadow puppets breathing life against a screen, to the more contemporary intersections of a bride's henna stain with the branding of tattoos and Bollywood sexuality - the sum of visual histories growing out of a contemporary meeting point.

It is still early to tell, but these new prints appear to have a softer tone than Amer's earlier work, such as "Trini" (2005) with its threads slashing an abstract image of sexual eye-candy. Perhaps this is partially imposed by the technical parameters of printmaking. Amer's attraction to subtle contradiction, however, remains across the pages in the studio explored with new clarity and cohesion.

The new direction in these prints is summed-up by a piece Farkhondeh was working on with grey foliage and in Farsi the words, "out of darkness to the light". There's a freedom, a calm, in this new work that sits in contrast to the earlier piece, "I Do Not Love You" (2005) for example, also on grey but with its words crossed-out by Amer's stitching, creating a feeling of loss and disconnection.

Amer is still to add to this new piece, but observing their collaborations around the studio, there's an internal resolve that goes beyond technical proficiency. Farkhondeh's Farsi script "out of darkness to the light" could be read as a metaphor for their long evolving passage from two artists to one work, from

RFGA to Amer and Farkhondeh. It is the kind of calm you find when you near a conclusion.