A pioneer in the use of video and new technologies in artistic creation in the United Arab Emirates. 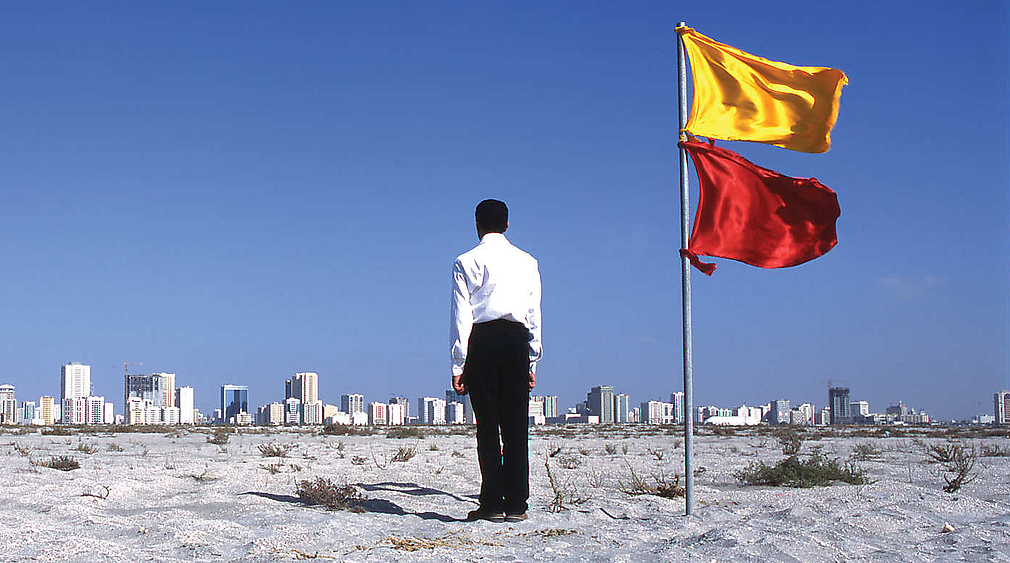 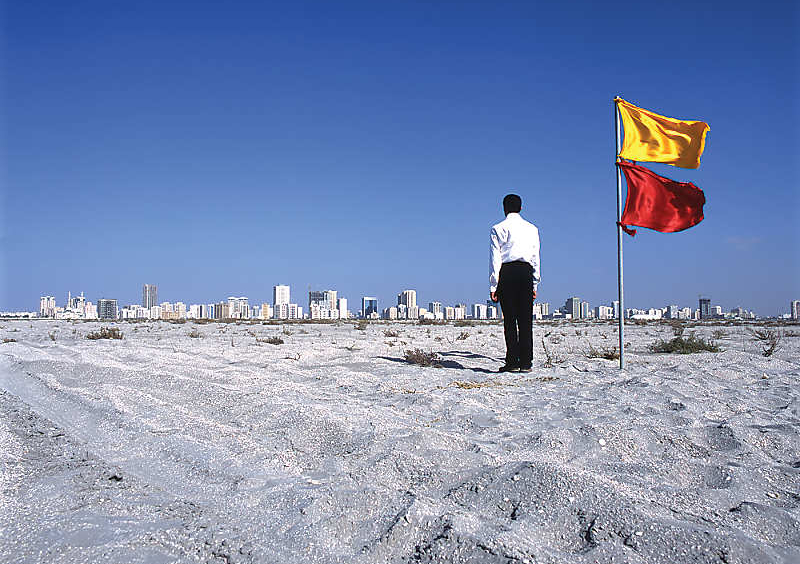 Mohammed Kazem’s work digs down to the intrinsic nature of things. He maintains close relations to his environment, is in connection with the elements and components of his surroundings, and incorporates their qualities in his work. He is a curious observer of processes of change, reflecting and contemplating until he has solved the riddles hidden in events and modes of behavior.

Together with the Group of Five (Hassan Sharif, Hussain Sharif, Abdullah Al Saadi, Mohammed Ahmed Ibrahim, Mohammed Kazem), Kazem is one of the first artists in the region to take a conceptual approach. Here he is a pioneer of the inclusion of video and new technologies in artistic creation. He passionately fosters new talents and gives workshops to train younger artists, expand their horizons, and reinforce them in their creative process.

This article is about three of his most important groups of works, which represent a broad spectrum of his interest and artistic work: Autobiography, Directions, and Window.

Under the title "Autobiography", Mohammed Kazem subsumes works created over many years that involve a complex analysis of psychological and social aspects of his personal life story. He remembers past and anticipates future things in a way that comprises current changes, whereby ever-new materials and elements serve him. Kazem puts what he observes into an artistic context, using simple means and everyday routines to do so, thereby expressing his intellectual and social interests.

In this and other works tied to Body Art, Kazem uses diverse gestures and body motions as artistic elements. He thereby embodies his biography as a social discourse that articulates itself in very private actions and processes. He creates an interaction between his everyday life and his art. In 1996, under the title "Autobiography", he presented a case of six shelves with exactly his own height. On the floors and interior walls of each shelf, he affixed photos of himself that show him imitating the awkward postures viewers have to take to see precisely these photos on the shelves. In "Autobiography 1994", Kazem explores with his tongue a keyhole, a tea kettle, a water hose, a bottle, and the openings of other objects.

The best-known photo series in this group of works is "Autobiography 4", from 1997, because some of the photos appeared in 2003 as the central advertising motifs on the poster, catalog, and other printed matter for the 6th Sharjah Biennial. On more than 40 photos, Mohammed Kazem stands beside flags and gazes into the landscape, always turning his back on the viewer, thus permitting the latter to participate in his contemplative gaze. The completely neutral, improvised flags mark a zone of urban development in Al Mamzar, a previously hardly built up area that stretches from the Emirate of Sharjah as far as neighboring Dubai. In some of the pictures, the landscape appears practically untouched, while on others one sees streets and blocks of buildings under construction or already completed urban districts. Kazem said he wanted to remind the viewer of the appearance of the first flags in this empty landscape and make him aware of how fast urbanization proceeds and one’s own area of life thereby changes. He explicitly aims to stimulate thinking about the consequences for the natural environment.

In the installation "Autobiography Nr. 9", from 1998, Kazem combines piles of sand with pieces of wood and stones coming from various places. He mixes pieces of wood from sites he is familiar with and has documented with pieces whose origin he does not know, thereby bringing together the known and the unknown, although the viewer is not aware of this.

Mohammed Kazem plays with meticulously precise numbers. He gives precise data on distances, surfaces, heights, and the positions and direction of motion of objects. In his works titled "Directions", he uses the coordinates of various sites as precisely determined with the aid of the satellite navigation system GPS (Global Positioning System). He fills the plastic numbers with soil and stones from various geographic locations and presents an installation in which GPS coordinates and elevation figures are supplemented with the time and date. Kazem’s interest here is the thought that nothing is immovable, because time constantly passes and the position of moving objects continuously changes.

At the Sharjah Biennial 2003, Kazem showed a video installation. From a boat, he threw wooden boards marked with geographical coordinates into the sea, abandoning them to the wind and current – a metaphor suggesting that people and things can go beyond the boundaries of their original places. His artistic action refers not only to the natural environment, but also to society, and rebels against physical, political, and spatial barriers.

When this work was shown in 2006 at the Singapore Biennial, Kazem had modified it to a round space, unfortunately presented only as a model. A 360° video projection on the walls creates the impression of a visitor standing in the middle, as if he were on the high seas instead of the floating piece of wood. The visitor stands on glowing, constantly changing geographical coordinates. Time and space are in a process of constant transformation.

Another extensive project Mohammed Kazem worked on from 2003 to 2005 is titled "Window". In it, the artist reinforces his feeling of "belonging". By means of this window, he was able to define his identity and express his affiliation. Kazem says one belongs, not to a tribe, a region, a nation, or a religion, but to humanity; and in this work he gives expression to the formation of such a belonging to humanity as a whole in each of us.

The most important aspect of this work is how it uncouples from an original individual constellation and takes on validity for a broad public and a whole society. Mohammed Kazem worked to put the viewer and the events surrounding him in a state of emotional and intellectual uncertainty. He shocks the viewer by confronting him with contradictions: the tremendous possibilities that modern technology has opened up in contrast to the misery it has also entailed. The idea came to the artist as he looked out of his window at home, as he does so often. Nothing blocked his view of the blue sky except for occasional clouds, but one day the outlines of a building towered up – and inspired the first step of this work: the photo series of the skyline, which tells the story. He took pictures at various moments to show the gradual change in the scenery. But the viewer cannot see the whole picture: Mohammed covers up part of the scene, and the pictures are taken from a perspective other than his own. The story does not coalesce until the end of the photo series.

The second part of the work is a video film of the building. With it, Mohammed Kazem introduces a human element. At the time he photographed the building, the owner did not permit him to take pictures of the interior of the room across from his window. He therefore had to restrict himself to pictures of the exterior, and his attention thereby went to something else, something that angered him. There was a hierarchy, a chain of command that began with the owner, continued through the managers, and finally ended with the workers who were erecting the building. These workers were subjected to harsh treatment and discrimination and are regarded as second-class citizens. They have to deal with the unavoidable gap between rich and poor. Another problem is that, on the day construction was over and the hotel was opened, the very workers who know every detail of the building were not invited to the opening and will probably never get the chance to spend a night there or even have a meal. It is the victory of one class over the other, a caste system that is both disturbing and depressing.

Another part of the work is an article published in Al Khaleej newspaper about a worker in China who was fired because of a love letter he wrote to his girlfriend. The relevance of this article from China, which was published in a newspaper that is a part of our environment, is that the situation for the workers here is the same as that of the poor Chinese worker who was fired. The media have come to have an effect similar to that of the building, and reality has become inextricably intertwined. The condition of the worker in the article is the same as that of the laborers who missed the opening ceremony, and that is the general condition of humanity. Mohammed Kazem presented the work with a dash of irony, playing on the contradiction between modern things and real life. He is against all who selfishly humiliate human beings and exploit them. In his work, from his unique perspective and in his very individual way, Kazem is concerned with themes of the struggle against oppression, the necessity to tear down the barriers between the peoples of the world, class conflicts, and environmental problems.