The artist on her interactive video "Je d’histoires" featured at the Lebanese Pavilion in Venice. 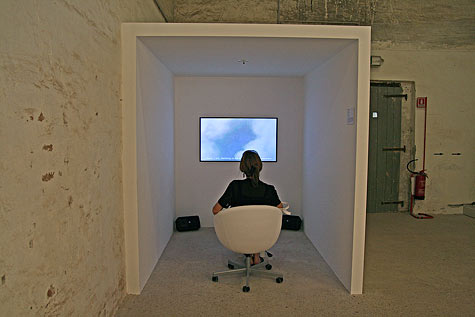 The weather is gorgeous here you know
The light, so unique, eases my sadness
The prospect of the sea, beyond the disfigured shore,
carries me far and away
I could not live elsewhere

I thought about this for months
Yesterday I didn’t think of it anymore
Now I do not fear any longer. I wait
I no longer keep track of the days, of the hours
(…)

Je d'histoires plays multiple stories. The visitor is invited to construct his own visual story from an array of video images, texts and music. He/she becomes an actor in the narrative process, each time renewing it.

Among the videos presented are landscapes, urban views of Beirut and super 8mm found footage. The texts are three letters about love and war. The music features sounds playing on repetition, melodious tunes and lyrical sequences. The visitor affects - disturbs the playing as the sounds he/she cues while watching can disintegrate the image. His/her presence is therefore imprinted in the sequence, making it unique.

He had no face left to cry, the bomb beheaded him
I insert my body in his place. I die
and then, the explosion
I only faint in this version, I do not die
(…)

Though Je d'histoires was conceived before the summer 2006 Israeli attack on Lebanon, I added to it new material after that war, such as the text "He had no face left to cry" which is an extrapolation of a situation that did not and will not happen, but which reveals my personal anxieties and fears.

Je d'histoires is meant to evolve. In the future, more videos, texts and music will be added to it, increasing the narrative possibilities to a point where I, the author, will lose control of the many scenarios, leaving room for "accidents."

The idea behind Je d'histoires is rooted in the continuity of my work which explores narrative possibilities and reflects on the idea of relative truth – only this time it is with the participation of the spectator. He/she can engage in multiple scenarios.

Je d'histoires reveals the process of storytelling and the mechanism through which text, image and music are linked to create a narrative. How any "event" can be recounted in various ways.

Throughout my work I raise the question of History and its possible narration. How do we approach history? Individual stories and collective History. What image of it do we retain? What image of it will I re-create?

I reflect on the process of memory: recalling events, re-enacting them, collecting remniscences, assembling testimonies and of course forgetting, an important part of that process, which allows us humans to survive. For me all these are fragments of an unknown and inaccessible History.

It took us years to regain some form of peacefulness
Today we understand
The war was not over, we just did not know it
How much longer will I have to wait?
(…)

Repetition is certainly a way to reflect on Time and to express a perception of History as a non-linear and incomplete narrative. To replay the scene of an experience, to reconstitute a story through recollections, archival documents or fictitious elements, constitute essentially a work on Time: recording of time, of its trace and its effects on us. A reflection on our relentlessness and yet our incapacity to measure, understand and accept the idea of time.

Excerpt from Lamia Joreige’s contribution in the catalog of the Pavilion of Lebanon, Venice Biennial 2007. (Alarm Editions)

The texts in italics belong to the original text of Lamia Joreige's installation "Je d’histoires."