Rabah's Palestinian Museum of Natural History and Humankind at the Brunei Gallery in London. 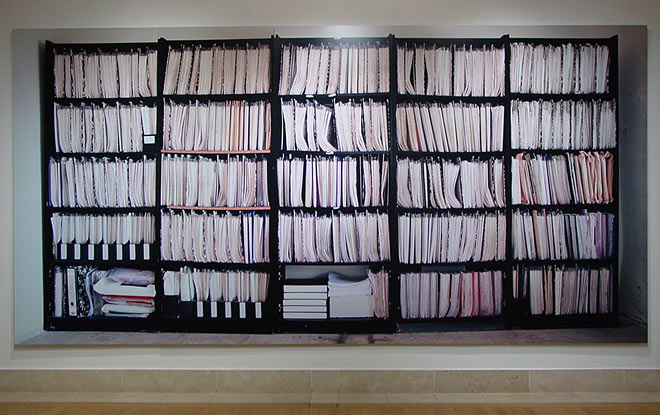 Khalil Rabah has managed the most difficult thing for an artist in that he has created a virtual space with a sense of logic and continuity, an artistic world that mirrors the absence, or presence, of place, space and opportunity in the real world. For a number of years now Rabah has maintained the fictional 'Palestinian Museum of Natural History and Humankind' which exists in title, concept and intention alone. Rabah has recently taken his museum, in its many varied manifestations to Athens, Amsterdam and Istanbul. He often uses invented artifacts to occupy a mock museum that is to function as a substitute for a situation so deprived, so disrupted , so totally unlike any other. This time, however, Rabah brings the museum to London, to the Brunei Gallery, at the School of African and Oriental Studies in the heart of academic Bloomsbury.

'50,320 Names' consists of two interrelated elements, a straight forward sombre still life photograph of archive shelves from the survey of historical properties in Palestine which was started in 1993, and a film which shows Rabah reading out the names of families said to inhabit the buildings taken from RIWAQ's Registry of Historic Buildings in Palestine. The structure of such material works well in its non-divulgence; the formal grid of the packed files and bookshelf, the even tone and beat of the artist calmly reading such a mass of information, straightforwardly covers what is there and what is denied. Rabah’s deadpan roll-call carries a beat more normally reserved for the dead and departed.

The work is perfect in its tempo, as this somewhat fallible reality of meticulously gathered information comes to London and enters the academic world. Rabah uses the resurgence of research and the reclaiming of place and idea as much in his fictive museum as the sense of loss. His work is subtle for, as an artist, his business is not to provide the guilty outsider with something they think they already know. The museum shows, in a way, an exact account of research, a repossession of truth, at least, in a time when knowledge, excavation, memory and ownership is cruelly denied and bulldozed. Attempts to reclaim space, knowledge and property, let alone attempts at a normal and regular economic, social and political life, may often be thwarted but, as this research and the artist’s use of it proves, it will never cease.

The 50,320 Names is shown at the gallery at same time as the exhibition titled 'Future for the past; Petrie’s Palestinian Collection'. This display is of objects and artifacts found in Gaza in the 1920’s and 1930’s. Sir Flinders Petrie, the 'Father of Modern Egyptology', was a pioneer of modern archaeological method and Professor of Egyptology around the corner at University College. This exhibition makes an ironic but probably well meaning, back-drop for Khalil Rabah, a leading contemporary Palestinian artist, whose work is based exactly on turning upside down its very premise .

The logic of the museum as resting place for the manifestation and construction of collective understanding may have been established in a very different time, yet there is something like a 'Museum of Mankind' almost everywhere. The one in London, behind the Royal Academy closed down some time ago, the contents moved to the British Museum, yet the Musee Quai Branly, only just opened in Paris, marks another attempt, however awkward, to house that kind of thing.

Petrie's work in Palestine set a standard with its meticulous excavation and recording of tombs. Unglamorous in his role, less flashy and showy than other archaeologists of the time, he became famous for his methodical and thorough recording and labeling, but found, however, that he was unable to account for the stratigraphical recording of his excavations in Gaza towards the very end of his life.

A project in, about, and of a museum, mimics or deals with expectation, belief and authority. The structure is there, the tendency towards a belief in the academic might dominate but still, the job is almost already done. Rabah's structure within a structure, is sensible and formal, an assured method for accounting and documenting what is not about what is not there as much what is. The project in a museum will have a certain value, through association. Khalil Rabah cracks the final code as the virtual, imaginary museum becomes the equivalent of a canvas or the empty pages of a book. It is, in a way, the ground, the conceptual basis for an ongoing manner of approach, thought and intrigue. Permutation, elaboration, emptiness, all cast there in this place that can only achieve freedom through virtual means, through the life of thought rather than material means. The question, for Rabah, is what to vary where, what to say when within such a strongly established and understood structure.

Khalil Rabah has very sensibly left the objects out of the museum this time, for in a way it has not been necessary for him to provide any physical reference to the past. The venue is not, in a way, really about the suspension of belief, the possibility for art to establish its own fiction over and over again. Here the place is pre-ordained, instead of art in an art gallery, there is a quiet museum within a museum. Rabah’s installation looks a lot like contemporary art, anyway, in its slim, slight, pure reference to historical research, and struggle. The tulips in Amsterdam, an earlier project, or the whole museum in Istanbul at the last Biennale there, were both more elaborate manifestations of the Museum. Any reference to materiality is gone in this case because the dominant mode is one of both healthy and unhealthy academic knowledge and presumption.

There are many ironic and telling touches to the siting of Rabah’s museum. In 1933 the academic anthropologist Flinders Petrie befriended a number of young pilots at the Imperial Airways station at Gaza. For Rabah's next show in London, which incidentally, is taking place in a flat in Chelsea, he will install the fixtures and fitting of the office of The United States of Palestine Airlines. This will be similar, probably, in style, to the Imperial Airways station in Gaza City visited by Petrie. While an aging Flinders was able to make his way back and forth by airplane, nobody in Gaza or any other part of Palestine is able to fly in or out. Rabah uses the airline office, with its ubiquitous model airplane on a stand, to remind of a sort of nostalgic, perhaps never to be realized, faith in an ability and right to travel. The map on the wall with its ever-expanding and far-reaching mesh of pointers encompasses an open world and represents thwarted hope.

Independent art critic and curator, based in London, UK.

The Palestinian Museum of Natural History and Humankind presents:
50,320 Names

School of Oriental and African Studies, University of London 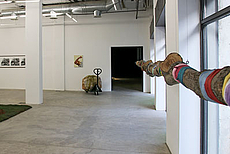