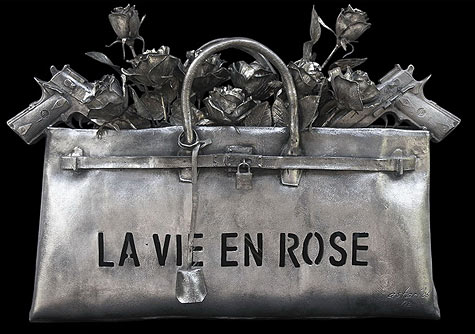 Enin Supriyanto (ES): First of all: Congratulations for the launching of your groundbreaking book: "Indonesian Women Artists, Curtain Opens". How did you start this very special project? What was the initial idea? What’s the main objectives?

Carla Bianpoen (CB): I have been reporting on Indonesian modern and contemporary art for over 18 years, and as barely nobody adequately covered women’s art, I made sure I did. I had covered almost all of the artists before. The idea for the book was to fill the gap in Indonesian art history, in which women artists have barely been focused on. But rather than having art or gender theories, we agreed that we should write the life stories of the artists in a manner that includes academic values but is entertaining enough for even novices in the art to read and get interested.

ES: You asked Farah Wardhani and Wulan Dirgantoro, two women writers and curators, working with you on this book. How would you describe your process working with them on this project?

CB: While Farah and Wulan were academically trained, I had the experience of an art journalist. We tried to combine the three skills, synthesizing and blending our knowledge on the artists and their works. As we all have our main jobs, to work on the project was really something we had to do in addition to our main jobs. Every write up went more than 5 times to and fro between me and my colleagues, then between me and the final English editor.

ES: How long did it take to finish the book? Which part was the most difficult part?

CB: It took about 2 years, with the last 8 months very intensive. The most difficult part was that we worked for our main jobs, and did the book as a ‘side’ activity which eventually became a main activity, which means we worked almost 24 hours a day.

ES: Is there any criteria in selecting the women artists included in the book?

CB: We are all three well informed about the art world, and selection was made according to various criteria that cannot be generalized into one fixed set of parameters. The selection has been made after extensive research along with a series of discussions and assessments. The artists selected have proven themselves over time by making their marks within the Indonesian art world, either by making aesthetic breakthroughs with their talents and skills, or by contributing greatly to the art and cultural discourse with their creativity, intellectual explorations and activities.

ES: The way the book is structured, it seems that you put a very strong emphasis on the artists’ biographical facts and how these relate to their works. Was it really planned that way? Any specific reason?

CB: Women’s biographies are intricately woven into their works, for most women artists work from within their experiences and feelings. Most conventional critics in the past tended to overlook this special feature, or were just unable to understand, and may therefore have chosen to ignore.

ES: The book’s launch was enriched with a very special exhibition--"Intimate Distance"--how would you describe this exhibition: Is it showing explicitly the core content of your book, or, the exhibition was actually taking a different direction, showing certain or special aspects of the development of Indonesian women artists’ creativity, or mode of artistic production?

CB: In my view, the exhibition was a continuation of the book and showed the latest developments of the artists profiled in the book. But three artists did not have new works, so they did not participate in the exhibition. On the other hand, upcoming artists, not included in the book were invited to join and showed magnificent works. Different from the book, which was to present women artists to fill the gap in art historical writings, the exhibition was to ‘review the trace of feminism in the Indonesian art discourse’, as stated in the Wulan Dirgantoro’s curatorial introduction. Interestingly, while different in purpose, both had the same result, i.e. the women’s narratives expressed in strong, professional works.

CB: I don’t think we want to speak about women artists’ ROLE, since that would give such a must-be connotation. Many women artists have already made their mark in the contemporary art scene. What rests is for the art historians, critics, art collectors and documenters to acquire a new way of seeing.

ES: Did you get any response or helps from colleagues who work in different field: academics in the area of women studies, women activists, etc?

CB: I would like to particularly note Prof Dr Melani Budianta who helped point at outlining the Introduction. Among the first who believed in the writing of the book and actually helped in the first stages was our English editor Heather Waugh, and the owner of CP Foundation, Mr. Djie Tjianan.

ES: Is there any plan in the near future: discussions, talks, tour shows, to give more exposures to the issues raised in the book?

CB: Participating artists in a discussion the day after the launch have expressed their intention to have further discussions. A funding agency has expressed interest in supporting an Indonesian version of the book. It is our hope that the groundwork is made for the future study of women’s perspectives in Indonesian art.

ES: What’s your next plan? Is there any plan to continue the project, in-depth research on different subject, monography on one or two women artists, maybe?

CB: Your essay in the book launched the provocative question whether Indonesia’s foremost heroine Kartini, in fact ought to be acknowledged as the Mother of Indonesian Modern Art, a question that should shake the general opinion that Raden Saleh was the Father of Modern Art in Indonesia.

I think this should be followed up with a serious research into the documentation on Kartini, which for the most part is written in Dutch and is in the documentation of KITLV, the Royal Netherlands Institute of Southeast Asian and Caribbean Studies in Leiden, Netherlands. Time and funding permitting, I would be interested to look into the possibility together with you.

Launched on 1 August, 2007 at the National Gallery in Jakarta with the exhibition:
Intimate Distance
featuring works by 35 artists
1 - 10 August 2007