Organisation and website for cultural exchange and development of contemporary Palestinian art. 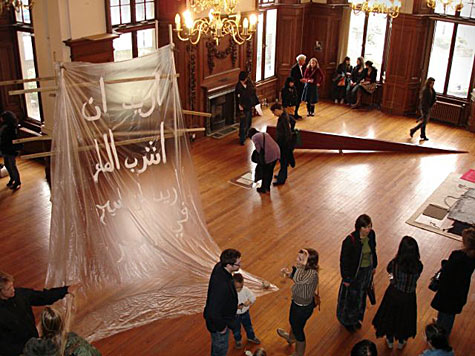 The constant and persistent attempt to deny the existence of Palestine at all levels means that artists, along with all people there, suffer a great deal of isolation. ArtSchool Palestine (ASP) was founded in 2005 by a group of like-minded arts professionals comprising the A M Qattan Foundation, Visiting Arts, Sacha Cradock, Samar Martha, Charles Asprey, and Kahlil Rabah, to create a permanent effective forum, a base, and a virtual platform through which all exchange and discussion of contemporary art can flow.

Despite the fact that its website has only been installed for two years, it already plays an essential role in providing discussion, distribution, and provision of contemporary Palestinian art in an international context.

ASP has set up long-term relations between institutions and individuals in Britain and Palestine, who for some time have felt that it would be beneficial to arrange a form of exchange and discussion but didn’t know what structure or organisation to go through. ArtSchool Palestine now offers this base and structure for exchange and development.

Residencies, exchanges with art schools, and exhibitions are arranged both in Palestine and in other countries. In 2006, ASP launched a virtual studio project between students from Chelsea College of Art and Design (London) and young artists in the West Bank. Students and artists worked collaboratively over the Internet on an exhibition in each location, without leaving their home bases.

The international group exhibition "As If By Magic" by 27 contemporary artists at the Bethlehem Peace Centre featured work by, among others, Damien Hirst, Lawrence Weiner, Daniel Buren, and Ian Finlay, bringing conceptually challenging work to an audience within Palestine. The difficulty of transport and communication was successfully circumnavigated by a grand and clear design, by which the individual art works were created on site, in Bethlehem, from instruction kits and templates.

Our goal is to promote Palestinian contemporary art and place it within the international contemporary art scene; we achieve this aim by supporting Palestinian participation in international exhibitions and biennales around the world. In 2005 ArtSchool Palestine supported the participation of eight filmmakers in the Kerry International Film Festival, Ireland. Recently, a solo exhibition by renowned Palestinian artist Khalil Rabah opened at Brunei Gallery (London), presenting newly commissioned art pieces as part of the artist’s on-going project, The Palestinian Museum of Natural History and Humankind.

Artist-in-residency opportunities in other countries are an important way for artists to focus on their work, to meet colleagues and curators, and to extend their networks. Realising this, ArtSchool Palestine has organised three residencies in partnership with Gasworks and Delfina Studios in London. Rafat Asad, Shadi Habib Allah and Mohanad Al Yacoubi took part in this program and had the chance to present their work to the UK public at the end of their three-month stay. In addition, ASP, in cooperation with Delfina Studios, supported the Palestinian artist Ahlam Shibli with a three week residency to complete a photographic project that was exhibited at the 2006 São Paulo Biennale.

ArtSchool Palestine's activities are expanding and developing in numerous ways. For example, in addition to the current work in Palestine, it is expanding its focus to include the Middle East region that is relatively under-represented in the UK. Under the title IN FOCUS, a major exhibition about the Middle East will open on 4 May 2007 at Tate Modern, the Imperial War Museum, and N4 Gallery. The exhibition, curated by Predrag Pajdic and Samar Martha, will feature works by 70 contemporary artists. With the opening of this exhibition, ArtSchool Palestine will inaugurate its new premises in London, the N4 Gallery, located at Finsbury Park, including also a workshop space, library, coffee shop, and studio for artists-in-residence.

In partnership with Riwaq Centre for Architectural Conservation, Ramallah, ASP is organising an international art exhibition, curated by Charles Esche and Vasif Kortun. The show will be part of the 2nd Riwaq Biennale for Architecture, Art and Design, which will be inaugurated on 20 October 2007 in various locations in Palestine.

Co-founder and Director of ArtSchool Palestine. She is also co-founder of Al Mamal Foundation for Contemporary Art (Jerusalem) and member of the 2nd Riwaq Biennale Committee in Palestine. In London she co-curates the Palestine Film Festival, and is currently co-curating the exhibition "In Focus" which opens in May 2007 at the Tate Modern.