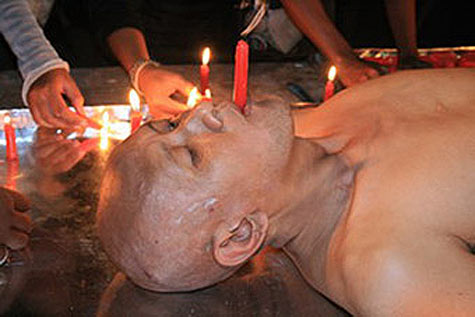 Another interesting piece was "Ketahanan Tubuh dan Mental" (translatable as: "Stamina of Body and Mind") by W Christiawan, of Bandung. The artist, clothed from hips to knees solely in a piece of cloth, lay down on a kind of metal tray on a table. He asked the viewers to light small candles and to set them up on the tray around his body. The mere visual impression was very artistic. But then the viewers could imagine how hot the metal under the artist’s body was becoming – without even counting the hot, melted wax! The many flies that alighted nearby died immediately. But Christiawan completed his performance with grace and without injury.

Art of the Earth and of Graves. About the Performance Art Urban Festival in Gemblangan, Indonesia.