Art of the Earth and of Graves

Art of the Earth and of Graves. About the Performance Art Urban Festival in Gemblangan, Indonesia. 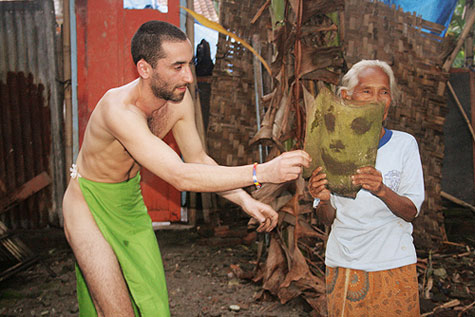 Internationally ranking festivals of performance art are seldom held. But such a festival becomes something special when it is staged in a village and the participating artists come from the provinces, the city, and abroad and are supported by activists, clergy, and bureaucrats. Such an event was offered at the end of April this year in the village of Gemblangan, in the special district of Yogyakarta. The festival "Pembaharuan Spiritual", Perfurbance #3 (which could translate as "Spiritual Renewal", Perfurbance #3 – Performance Art Urban Festival) invited participants from the United States, Canada, France, Australia, Japan, China, Taiwan, Singapore, Burma, and such Indonesian cities as Bandung, Surabaya, Solo, Jakarta, and Yogyakarta.

The organization and financing of the festival was realized through an alliance of all participants. Thus, this art and culture event not only examined the functions of art and religion in life, but also underscored the significance of working together. Along with the presentations of traditional and modern performance pieces and religious rituals, seminars were also held during the festival from April 25 to 29, 2007. These were devoted to a wide range of issues including alternative education, organic farming, wholesome nutrition, alternative medicine, garbage processing, alternative energy, and a new discussion of cultural and spiritual values that serve the development of society.

Gemblangan lies in the community of Bantul and is one of the villages that were almost completely destroyed by the earthquake on May 27, 2006. More than 6,000 people died in the disaster. Bantul has 130 pesantrens (Koran boarding schools) with a total of 33,000 pupils. The performance artists who have joined together in the "Performans Klub" under the chairmanship of Iwan Wijono have actively supported the earthquake’s victims since the day after it hit. Acquaintanceships between the artists and other groups developed into friendships and led to ideas and common projects. Dreams and hopes for a better future thereby developed – for a future in which collectivity and mutual respect despite all difference will take on greater significance in the era of globalization.

Accompanied by a prayer honoring Almighty God, recited by the Zikir Saman group from the pesantra Amumarta in the village of Jejeran, the viewers witnessed the ritual of Wali Kutub from the village of Canden. The group offered prayers and venerations to the Wali or Aulia of all the directions of the compass (note: Wali are Islamic scholars or spiritual leaders; Aulia are saints). Also carried out were the Jathilan and Dholalak rituals, which are characterized by the element of trance. Gejok Lesung, a group of older women from the village of Pandes, and the group Sholawatan from Gemblangan itself also performed. Community leader Idham Samawi promised there would be no shopping mall built in the district of Bantul and that primary pupils would be exempted from paying school fees.

The performers appeared in a number of places in and around the village: on conventional stages, in residential buildings where participants were housed, on intersections, in fields, beside the river, in cattle stalls, or in the underbrush. Even the cemetery was integrated in the work of the artists. The latter aimed to make their art measures something "not detached from life". And indeed this is the core of a stance of performance art that rejects what is established. The medium is viewed as a catalyst for developing vital power. This is not only a question of courage and determination to present a different form of expression or a sensation. Rather, performance is a "verb" arising from the harmony of the mind, the heart, and action. Such a viewpoint no longer needs to distinguish between traditional and contemporary performance. For each performance indeed has its own standard of aesthetics and its own specific rules of presentation. There is no reason to judge one performance better than another. Each performance has its own function.

Some of the works drew particular attention during the festival, for example the piece by Bruno Mercet, of France, which focuses on objects. With the motions of his body, the artist responds to the physical qualities as well as the form of an object. An object in the form of a small sculpture made of pliable material can thereby become a matrix of movement and pose. It initially seems silly and funny, but a closer look conveys the artist’s consideration of the degree to which the objects in our lives have enslaved and manipulated us.

Or the piece by Lewis Gesner, of America. For two hours, he walked around the village, collecting rubbish, attaching pieces of it to his legs, and dragging it along after him. More and more pieces of garbage collected, until he could no longer pull it all. Perhaps this is a critique of us, who are accustomed to discarding waste everywhere. But perhaps he wants to express the weight of life that burdens the Americans because they have already created all too much "garbage of life" on the surface of the earth.

Another piece that also deals with rubbish and has an interesting approach was the performance by Rachel Saraswati, of Yogyakarta. She covered her body completely with all kinds of thrown-away things and then got into a large tub filled with water. While singing the Indonesian national anthem, Indonesia Raya, in a respectful stance in front of a flagpole, two of her partners raised the American flag on it. The effect was an uncompromising and pointed irony and parody.

Another interesting piece was "Ketahanan Tubuh dan Mental" (translatable as: "Stamina of Body and Mind") by W Christiawan, of Bandung. The artist, clothed from hips to knees solely in a piece of cloth, lay down on a kind of metal tray on a table. He asked the viewers to light small candles and to set them up on the tray around his body. The mere visual impression was very artistic. But then the viewers could imagine how hot the metal under the artist’s body was becoming – without even counting the hot, melted wax! The many flies that alighted nearby died immediately. But Christiawan completed his performance with grace and without injury.

The greater part of the population in Bantul lives from farming, especially rice cultivation. Perhaps that is why many of the viewers followed the piece by Made Surya Darma, of Bali, so meditatively. He arranged pieces of brushwood on whose ends he mounted plastic war toys like tanks and bombers into a kind of bouquet. He then "planted" the sticks individually in a rice field. A friend standing beside me was completely astonished and spontaneously commented: "This is surely the title ‘Planting the Military in our Rice Fields’."

Almost all the pieces to be seen at this event convey a clear concept. It appears that all the participants worked very seriously on making a conceptual contribution to the process of rebuilding the community of Bantul. Thus also the piece by Yoshie Baba, of Japan, which shows an artist asking the viewers to applaud her every movement and action. Until she is completely exhausted, she seems to display the futility of the life of an artist who is only after applause and praise.

The festival was indeed a celebration of contemporary art – and that in a village whose external appearance is one of total chaos. But this village has an astonishing drive and passion for mutual aid and community. No differences exist there anymore that exclude members of any specific group, whether in terms of generation, cultural, ethnic background, or class. Perhaps that is the future direction of our art, in which artists resolutely represent the values of straightforwardness, loyalty, and solidarity, even if they are not the Aulia.

Originally appeared in Indonesian in "Kompas", 20th May 2007.
Translated from the German version by Mitch Cohen.
11 image pages, more info