Alexandria Contemporary Arts Forum strives to create a balance between the local and the global. 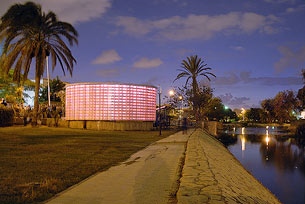 Alexandria Contemporary Arts Forum (ACAF) was established out of a pressing need for a serious and critical initiative for contemporary art in Egypt's second largest city. Alexandria has for long suffered from a centralist mentality prevailing in most sectors of Egyptian society. By early 2005, ACAF's founders felt that Cairo's art scene was in a sense established, meaning that it would probably not develop any further, in terms of structure, for some time. Cairo, the center of this centralized system seemed to have reached a temporary peak by generating a climate in which a counter-circle of artists and art professionals (now usually dubbed as the independent scene) could develop and manage to achieve varying degrees of international and local success.

Back in Alexandria, it was clearly visible that some efforts were being made to add vitality to Alexandria's international image, before the opening of the new Alexandria Library (Bibliotheca Alexandrina), for many people, not exposed to contemporary Egyptian history, Alexandria only existed in the ancient past of Cleopatra and the Lighthouse or the not so ancient past of Cavafy and Durrell. For the small Alexandria arts and culture scene itself, history in its ancient and more recent forms was and still is a major intellectual stumbling stone, a haven for some to escape an increasingly confused, globalized and consumerist society and for others a honey producing bee hive for weathered semi-leftist ideology and uber-nationalist views.

At around the same time ACAF opened, the so called international establishment had figured out that Alexandria could be of some use as a cultural icon, especially with its position as a Mediterranean city and its international historic potency, thus initiatives such as the Anna Lindh Euro-Mediterranean Foundation for the Dialogue between Cultures based themselves in Alexandria. These and many other factors created a specific equation that made for an intersection of the international and the local and it is this intersection that ACAF has attempted to delve into creatively and discursively since its establishment in December, 2005.

One of the main crossroads that an art initiative is bound to intersect at in Egypt is 'Education'. 'Education' can be all too misleading since it is usually referred to as an indisputably positive approach to art practice in so called 'developing countries'. ACAF has had to tackle with this issue on a critical and a pragmatic level, realizing that 'Education' itself should be critiqued from within and preferring the fostering and development of a climate in which 'knowledge' isn't imposed as a template from without, but slowly arrived at through situations of intense interaction, collaboration, discussion and wider forms of social communication. The project Prototypes for an Advanced Outdoor Visual Culture ACAF realized with artist duo Winter/Hoerbelt touched upon alternative approaches to the so called "Educational Workshop" and ended with a kind of penetration of public space in the form of the Mahmoudiya Canal Cratehouse. Other projects ACAF is embarking on such as Cleotronica: Festival for Media, Art and Socio-Culture attempt to reconsider and reformulate frameworks that are now established international praxis - such as the media festival – highlighting their communicative possibilities in a combined local and global context. Collectivity and research as an artistic process are also being addressed in ACAF's programming, mainly through the ongoing project BOOSTER: Public Relations Agency Simulator for Art and Culture. Booster is an experimental project that attempts to simulate the standard structure, tactics and working methods of a typical small-sized Public Relations Agency working in the corporate sector. The collective structure of Booster enables a team of young Egyptian artists, architects and designers to research and analyze a wide range of locally pertinent and interconnected issues, focusing on the tri-relation between art, culture and economics in Egypt.

ACAF has been concerned with the idea of 'Glocalisation' ever since it's opening exhibition "FAMILY: You, Me and the Trajectories of Post-Everything Era" in December 2005. A question that the initiative constantly attempts to address is: how can an art space in a seemingly peripheral location communicate thoroughly with its direct public while avoiding being labeled as 'provincial'? In its projects, ACAF strives to create a critical balance between the local and the global and in doing so aims at providing the most fruitful outcome for its audience and artistic community.

Curator and writer based in Alexandria, Egypt. He co-founded Alexandria Contemporary Arts Forum (ACAF) in December, 2005, and serves as its curator.