The Disquieting Art of Khosrow Hassanzadeh

The 'Terrorist' series by the Iranian artist; reclaiming the right of self-representation. 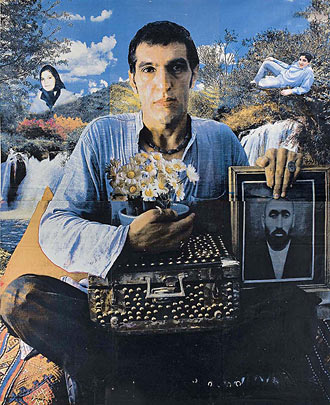 "This series is the result of two years of thought, research and travel. It is a reflection of a world where the word 'terrorist' is thrown about thoughtlessly. What is a terrorist? What are the origins of a terrorist and in an international context who defines 'terrorism'? The West, with its personal definition of terrorism, gives itself the right to take over a country, while in the Middle East the West is clearly accused of being a full-fledged terrorist. In exploring these questions, I portrayed the people in whom I have the most faith: my mother and sisters." With these words Khosrow Hassanzadeh introduces his most recent work Terrorist (2004). In the four-piece series Hassanzadeh portrays himself and his family members against a backdrop with images referring to their personal religious beliefs, accompanied by labels describing each portrayed "terrorist" with characteristics such as nationality, religious denomination, and personal history. The combinations of images and texts reveal that Hassanzadeh addresses contemporary Western perceptions in which Islam is heedlessly associated with terrorism. His "terrorists" are Muslim terrorists, and at the same time, ordinary believers who are under scrutiny because of their faith.

Discovering Islam
The emphasis on Islam in the Terrorist series reflects Hassanzadeh's development as an artist whose career became increasingly tied with the Euro-American art world and its concomitant perceptions of Iran as a Muslim country. After a short training at Tehran's Art Academy, Hassanzadeh made his first paintings in the mid-1980s. International recognition came only in 1999 when his War series, a gloomy diary of his memories as a volunteer soldier during the Iran-Iraq war, was exhibited at the Diorama Arts Centre in London. The exhibition proved to be a turning point in Hassanzadeh's career. His work, increasingly addressing an outside observer, represented by his Western audiences, ultimately changed orientation. He began to observe Iranian society with the eye of an outsider, "looking in at his own society with a strictly incriminating eye" and "looking out for signs of culture and identity. [1]" It is at this point that Islam made its way into the paintings of Hassanzadeh. While his early works contained no references to Islam or Muslim society whatsoever, the newer series were loaded with them. Both Chador (2000), a response to Western perceptions of the veil as a symbol of the oppression of Muslim women, and Ashura (2000), a re-interpretation of the Shiite ceremony focusing on the female saints of Shiism, set out to challenge the dominant Western views of Muslim women. Prostitutes (2002), a tribute to sixteen prostitutes killed by a religious fanatic in Mashhad, increased Hassanzadeh's fame in the West as a representative of a presumed Iranian "counterculture." Meanwhile, Hassanzadeh's orientation was gradually changing from a direct commentary on Iranian society to including a reflection on Western obsessions with Islam.
Ethnic marketing
Hassanzadeh's shifts in focus are tightly interwoven with the changed positions artists from the Middle East occupy in the global art world. Since 9/11, exhibitions featuring artists from the "Middle East" or the "Islamic world" are booming in the West. Most of these exhibitions start from the –debatable– premise that contemporary art can serve as a means to inform audiences about the current state of affairs in the region [2]. Moreover, the Middle East is "hot" and museums and galleries, just like publishing houses and other commercial institutions, need the marketing appeal of ethnic labelling to boost visitor counts or art sales [3]. All the same, the idea that an artist's national or religious background has an indelible effect on an artist's practice is highly controversial in the art world, and particularly in the Middle East. Many artists, including Khosrow Hassanzadeh, have been struggling against this notion for years. They argue that terms like "Islamic," "Middle East," or even "Iran" are loaded with religious and political subtexts and that the use of such terms in exhibition concepts draws away attention from the artistic value of their work. Ironically, it is precisely Hassanzadeh's raw commentary on Iranian society that prompted most curators to include his work in their exhibitions.
Reclaiming independence
Set against this background, the Terrorist series can be analysed as a critique on the ways the international art world approaches artists from the Middle East, as Sohrab Mahdavi has done in his review of the series. He argues that by portraying himself and his mother and sisters as terrorists Hassanzadeh wants to take possession of the accusing gaze of the "other," i.e. the West. Thereby, the work seems to criticize the common practice of the art world to demand that artists in the Middle East scrutinize their identities and reformulate them according to Western needs. Although Terrorist aims to reclaim the right to self-representation and independence, "It fails on both registers: 'self-representation' here is an appropriation of Western values and the work can only become 'independent' if the artist's intended viewer is Western." [4] Nevertheless, this "radical failure" only reinforces the artist's message, making it unique in the non-Western art scene. Artists like Khosrow Hassanzadeh are in a catch 22 situation. They have to rely on the Euro-American art market to function as artists in a gradually globalising art scene. Yet they feel uncomfortable with its crude marketing policies that emphasize their "otherness" and keep them in assigned roles of "Muslim" or "Middle Easterner." Hassanzadeh describes himself as an "Occidentalist," someone who moves back and forth between the mutual imagery that East and West produce. The question is if in the current hypersensitive political climate artists will be able to take up such sovereign positions.
(Published with permission of the International Institute for the Study of Islam in the Modern World, ISIM, Leiden, The Netherlands, where the article appeared in the ISIM Review 18.)

Curator of Middle East and North Africa at the Tropenmuseum in Amsterdam, The Netherlands. Researches and writes about visual arts and popular culture of these regions.

Inside Iran
A Retrospective of Khosrow Hassanzadeh