The destruction machine. About the video animation Purple Artificial Forest, shown at "Nafas".

Before talking about Mrs. Kenawy’s work, I allow myself a few words on Amal. It indeed seems to me that a genuine work of art is always rooted within the author’s personality. Should it dispose of its own distinct life, its interpretation is no less linked to the proposing artist. Amal Kenawy is an ambiguous person. Ambiguous in the sense that, on the contrary to others, what she sustains to be does not necessarily correspond to what she is. This produces the quiet uneasiness that has always inhabited her work. A work leveled off by a subtle tension, a permanent balance between the internalization of an acknowledged discomfort and the longing for a yell of nameless rage addressed to nothing in particular. For a while she had chosen to be theater producer and actress in one, using her body and her face as an instrument that had to be got through and with whom accounts were to be settled. In The Purple Artificial Forest, it would seem that this balance has been interrupted and that the artist has decided to pass on to a new stage of her work. It must be added that hence she alone signs the works on which next to her name that of her brother could always be found. Is it the divorce, the separation where each one must assume one’s own universe single-handed, did this project her into the whirling madness that suddenly reveals an unchaste chaos of inner life finally released. No control, no command, the pure madness of a decomposing universe, relentless rotting in the womb of which no flower will ever be preserved. We could feel as if we were unexpectedly faced with images of the world’s madness dispensed by a totally uninhibited TV news program. Not at all. The film we see is cruelly intimate. Like the chronicle of a throbbing and lethal illness experienced under a microscope. The woman is there, powerless, beautiful, and sad at the same time. The child cruel, selfish. The beasts, death. And this excruciating negation of life. A verocious destruction machine. With its indescribable creatures. And the rhythm. Everything here is a matter of rhythm. It guides us and attracts us. It measures out the time of each image and creates this permanent uneasiness. As if we had been given more than we could ever take. Implacable. Like the sound of boots from an army on march. We all have to go through it. As in a Kafkaesque narrative, we feel an inexorable suffocating by power of the ineluctable. No escape. Has the artist drawn a portrait of herself as the Dame aux Camellias? No. There is no narcissism. No selfishness to stop us from taking on the violence of this totalitarian and verocious universe. And this purple over everywhere like a bath of youth, a baptism to give us a second chance. But rather than from redemption, this purple is like blood diluted by our errors. The verdict has fallen. No appeal. We are condemned.

(From the French: Helen Adkins) 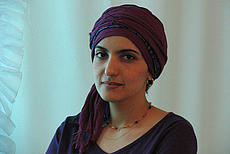 Honoring the memory of the Egyptian artist who sadly passed away on 19 August 2012, a look back to some of her works.