Project in Berlin under the artistic direction of Catherine David, 2005-2006. Platform for creative Iraqis. 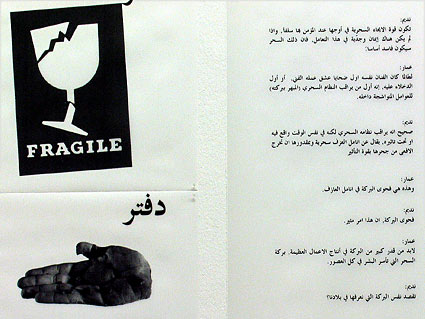 The moment seemed chosen for symbolism. On the day when a new parliament was elected in Baghdad, the Kunst-Werke in Berlin invited visitors to the presentation of its exhibition "The Iraqi Equation". While the future of the country was decided in Iraq, in Berlin, an inventory of the present was carried out on the state of Iraqi culture after thirty years of dictatorship, more than a decade under the embargo, and now already two years under US occupation, as the former head of the Documenta, Catherine David, underscored. As curator of the exhibition, her aim was to provide a contrast to the familiar TV news images that have come to us since the Gulf War.

For an exhibition that wants to provide a view completely different from the images conveyed by the media, however, an awful lot of monitors are set up on the ground floor of the gallery. Right at the entrance, the visitor encounters several television sets showing the current broadcasts of Arab satellite stations: a potpourri of news, reality shows, advertising, and Arabic music clips, just like what one would see every evening on the tube in Baghdad; after all, after the invasion by U.S. troops, the country was abruptly thrust into the satellite era. A few steps further, old black-and-white pictures by photographer Latif El Ani flicker across a side wall. One sees modern views of cities, bridges, squares, and functioning industrial plants, a country experiencing a boom – views from Iraq in the 1960s, when the oil boom seemed to bring the dream of an Arabic modernity within reach.

Those who expect to find only art at "The Iraqi Equation" will rub their eyes in astonishment. The whole thing resembles more a multimedia installation and sees itself as a "platform" to bundle various discourses and viewpoints. So ultimately only a few works by Iraqi artists are on view. Most conspicuous is the reproduction of a huge mural, which extends across an entire side of the room. In a style reminiscent of Otto Dix, it shows a scene from a "Coffeehouse in Baghdad", thus the title, with hookahs, shoeshine boys, and tea boys, along with representatives of the bourgeoisie and the military. The painter Faisel Laibi Sahi created this work in London in 1984; the original hangs in the home of a private collector in Abu Dhabi. On another wall are enlarged excerpts from the online diary Daftar (notebook), which the Iraqi artist Nedim Kufi composed from essays, translated articles, and graphic illustrations.

However, here one does not get to know as many Iraqi artists through their works as through the cinematic portraits by Jordanian filmmaker Sawsan Darwaza. For her series "An Artist With A View", she interviewed a theater director, a costume and jewelry designer, an architect, and a poet; these films are shown on additional TV screens distributed loosely around the room.

Large wooden boxes are set up in the center of the exhibition room and serve as screening booths. Running in box number one are four video documentations dealing with people returning from exile. Now they are home again, after years of absence, and have used hand cameras to record their impressions and initial encounters with a destroyed country and its people: shocking scenes, for example when a victim tells of Saddam’s regime’s brutal torture methods. That makes the visions of a free and democratic Iraq, as invoked at the first meeting of the Iraqi opposition groups in London three weeks before the U.S. invasion, seem all the more utopian. At that time, communists, representatives of the Kurds, and Shiite clergy confided their desires for the future to filmmaker Hana al-Bayati. The name of the film running in the third wooden box is "On Democracy in Iraq".

The exhibition’s emphasis is on this kind of film documentations; the journalistic approach dominates. One could almost say that "The Iraqi Equation" is basically a documentary film festival in another form. So one should bring along a corresponding amount of time. To see all the films will take about 14 hours.

But some of the names are already familiar. In the exhibition’s cellar, "Under Exposure" by Oday Rasheed is showing, the first feature film made in Iraq after the fall of Saddam’s regime, which is already being screened in German cinemas. And there is also something to see by Salam Pax, the web-blogger from Baghdad who became famous during the war for his Internet diaries. Since the end of the war, he has produced for the BBC a few video diaries that show his view of everyday life in Iraq today.

So what is the bottom line under "The Iraqi Equation"? Not much seems to remain of the cultural life of a country that once proudly saw itself as the "cradle of civilization". The largest part survived in exile: the slender shelf of literature from or about Iraq, itself, speaks volumes. Catherine David has made a virtue of necessity and brought together an expressive puzzle: not a completely new picture of Iraq, but an expansion and deepening of the one we have.

Journalist at the taz newspaper in Berlin, Germany.

(Published with permission of the taz newspaper, where the article appeared on 21.12.2005.)
(From the German: Mitch Cohen)