A letter from Copenhagen

A letter from Copenhagen. Impressions about the Images of the Middle East Festival 2006. 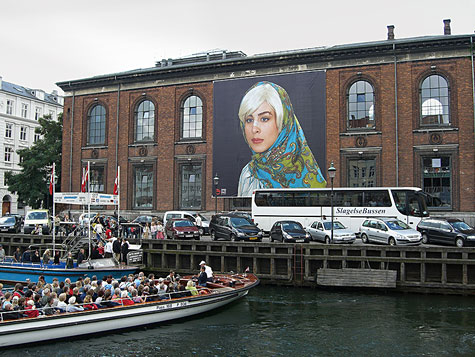 It&apos;s drizzling steadily and the wind is billowing off Copenhagen&apos;s harbour.

By the time we make the quick stroll from Charlottenborg Hall to shelter on the other side of Nyhavn, we are all soggy, grateful and a little hungry for the first refuge we find among the polished restaurants and bars along the harbour front.

What was once the first port of call for foreign sailors in Copenhagen, offering warm refuge, tattoo parlours and other nocturnal comforts to weary sailors of previous centuries, Nyhavn these days makes an agreeable promenade for the fashionable and sleek.

So it&apos;s apposite that a group of Arab artists celebrating the opening of their group exhibition &apos;Taking Place...&apos; at Charlottenborg should find a suitable refuge from the elements tonight under big white umbrellas.

Staring back across at us from the Charlottenborg side of Nyhavn&apos;s canal is a giant poster from the exhibition&apos;s overall host, the Images of the Middle East festival, depicting a gaily-coloured, hijab-covered Arab girl with a prize-fighter&apos;s bandage across her nose.

And our motley group of artists and curators keeps expanding as others join us, forcing our end of the table to keep moving towards the edge of umbrella cover, up against the rain. It&apos;s another opportunity for Palestinian artist Sharif Waked to display his droll wit.

"Even in Denmark, we Palestinians can only find temporary refuge," he says, sipping his endangered Coke, "always forced to move just as we&apos;re getting comfortable!" Sharif erupts into laughter, as we shift our chairs again in between our chat about exile and dispossession, of another day&apos;s events provoking more sighs over memory and forgetting.

Looking at his works earlier in the evening at Charlottenborg, Sharif was more pugnacious company, as he lamented the Palestinian condition and how the Arab world desperately needed the sort of muscular visionary that Malaysia&apos;s recently retired veteran leader Dr Mahathir Mohamad represented.

Watching his video &apos;Chic Point&apos; after sweeping past his garish, wall-sized fluorescent pixellated bromides of those notorious snapshots of Iraqi prisoners tortured by American soldiers, it&apos;s not hard to see what Haifa-based Sharif harbours beneath his cheery demeanour.

Like &apos;Chic Point&apos; - with its exquisite nods to a stylishly lit and soundtracked Milan catwalk show, its stream of handsome young men baring their torsos thanks to holes gapingly tailored into shirts to allow easier body searches at Israeli checkpoints - Sharif is wistful for opportunities to reclaim Arab dignity, sharing an emphatic affinity with those seeking a durable and equitable Palestinian homeland.

It&apos;s just the sort of quest someone like the authoritarian and often self-declared Muslim saviour of the developing world Dr Mahathir might promise to lead, just the solution to lifting the despair felt by Sharif&apos;s community over the dissembling Arab world in the face of Israeli and American wars in Lebanon, Iraq and Afghanistan.

We&apos;re soon relieved of any levity gained from the odd beauty of Chic Point&apos;s fashion show when it cuts away into a series of real and sometimes grainy photographs of Palestinians and other Arab men forced to expose themselves at Israeli checkpoints. With their shirts pulled up and their trousers sometimes undone, they&apos;re queuing to be searched, cleared and ultimately humiliated at Israeli checkpoints as they go about their daily lives.

In &apos;Jericho First&apos;, Sharif&apos;s white canvas featuring whirling black and red prints share a similar hesitation about enjoying yourself too much, when on closer examination these series of graphics reveal a stylised vicious circle, of a gazelle desperately trying to escape a lion&apos;s attack. In a reference to the failure of 1993&apos;s Oslo Accord between the PLO and Israel and the betrayal felt by many Palestinians, it&apos;s just as hard as the gazelle to escape the point that in the circle of violence, there&apos;s seldom a beginning and an end.

Around the corner in the beautifully preserved halls of 18th century Charlottenborg, Khalil Joreige and Joana Hadjithomas are displaying their &apos;Wonderful Beirut&apos; series, glamourous photographs of the city taken before the devastating 15-year civil war, when their birthplace was celebrated as the Arab &apos;Riviera&apos; filled with the hopes and pleasures of modernity.

But these picture-perfect tourist postcards have decayed and are partially destroyed. The colour slides from 1968 are allegedly taken by a possibly fictitious Abdallah Farah for the Beirut tourist authority, now all wilted by fire, the sunny images warped by curling, melted film. Soon after the start of the civil war in 1975, Khalil and Joana explain, Abdallah began to damage the negatives in order to mimic the destruction taking place around him.

The work reveals sly points about the centrality of rebuilding myths in a war-ravaged Arab world, of losing memory and the desire to avoid reality. It comments on the frantic rebuilding of the Hariri years, which the artists say was driven by an agenda to bolster the popular Lebanese myth that Beirut is/was a modern paradise.

Yet reality has recently intruded, with life imitating art as Beirut is again laid to waste by war, this time between Israel and Hizbollah (and by quick extension, all Lebanese). For a brief moment, before the latest war, Beirut&apos;s reality was proving more charming than previous fantasies, despite real memories and lives being trampled on by the Hariri-driven building boom of the late 1990s.

Like in their previous film &apos;Around the Pink House&apos;, Khalil and Joana say the impact of the 15-year civil war continues to live on in Lebanese lives, once segregated along religious and cultural lines and now along class ones as well.

But perhaps the most pungent of the visual art works showing in this &apos;Images of the Middle East&apos; festival is also turning out to be among the most popular.

A few days after opening night, there are big crowds of school children and older Danes spending a lot of time around the works of Palestinian American artist Emily Jacir.

Her installation of a refugee tent, embroidered with the names of the 418 Palestinian villages destroyed by Israel in 1948, is a haunting performative work produced with the help of many people stitching in those names, invoking the ghosts of those hundreds of disappeared villages.

As the exhibition&apos;s curator Charlotte Bagger Brandt notes, the embroidery work by many people has helped create "a new collective memory, keeping alive a place that is no longer physically accessible".

The series of framed texts and photos that make up the &apos;Where We Come From&apos; series made between 2001-03 is a similarly affecting work, as Jacir documents her travels to the former Palestine on behalf of those in the diaspora who are not allowed to go home anymore.

By fulfilling simple requests such as revisiting family, friends and favourite childhood places, the work documents these apparently transgressive moments that speak of Palestinian desires and longings. In these instances, the brutal reality of political conflict and Palestinian dispossession has been momentarily made more bearable by her acting as a proxy for the displaced diaspora.

But what of the Images of the Middle East festival itself?

While such celebrations of cultures from an arbitrarily drawn part of the world might seem cynically timely and contentious - despite having been planned a few years ago and well before recent controversies over cartoons and Lebanon - curator Brandt says her &apos;Taking Place...&apos; exhibition does not represent "Middle Eastern art".

"Rather, it shows works which examine what might be termed the logic of the place, on the basis of the idea that the detail often defines the whole rather than the other way around," she explains.

For the Danish Lebanese performance artist and critic Khaled Ramadan, the broader festival could not have happened at a better time, especially for a European community wary about a Muslim-dominated conflict-riven region that is also nervous about its recent immigrants. And then there&apos;s a Danish government in coalition with a far-right, anti-immigrant party hostile towards its Danish Muslims.

"The irony is that you have a Danish establishment so worried about the &apos;otherness&apos; of a small minority of the community while having to follow through with supporting a festival that celebrates such foreignness," Khaled says.

"And yet they would love to kidnap the success the festival has had so far, as it appears to have generated a large awareness among the Danish public, expanding what has been a very limited insight into a region explained by clichés of religious conflict and instability."

"To some extent, the audiences have been bigger than previous festivals because of the recent controversies such as the cartoons outrage and the Lebanese war. And there has been more curiosity about Arab aesthetics, about the cultures driving the Middle East today."

Meanwhile, outside under our big umbrella in Nyhavn, Sharif gets some relief at last as his large hamburger arrives, staving off further jokes tonight about displaced Palestinians. The irony is not lost on many of us that tonight is one of those rare moments when our displaced, diasporic &apos;Third World&apos; identities can be rested in a refuge off Copenhagen&apos;s harbour front.

Toasting tonight&apos;s &apos;Taking Place...&apos; opening, the Egyptian-Lebanese artist Lara Baladi says her work in the broader festival celebrates a more colourful and complex Arab world, that contrasts vividly against the brutal grind imprinted in so many European memories.

Lara&apos;s work at the opening of the festival a few nights before apparently kept the rain clouds away, as large screens shimmered above the water along the Amager coastline with images of richly treated Egyptian pop icons, almost levitating off the beach.

But like so much work showing at the festival, there is a poignancy in keeping these fleeting moments intact along the beach and elsewhere, before the elements displace us all with rain and wind.

Danish Center for Culture and Develop.

Under the Same Sky