Essay about the installation by Mounir Fatmi (Morocco), shown at the exhibition "Nafas". 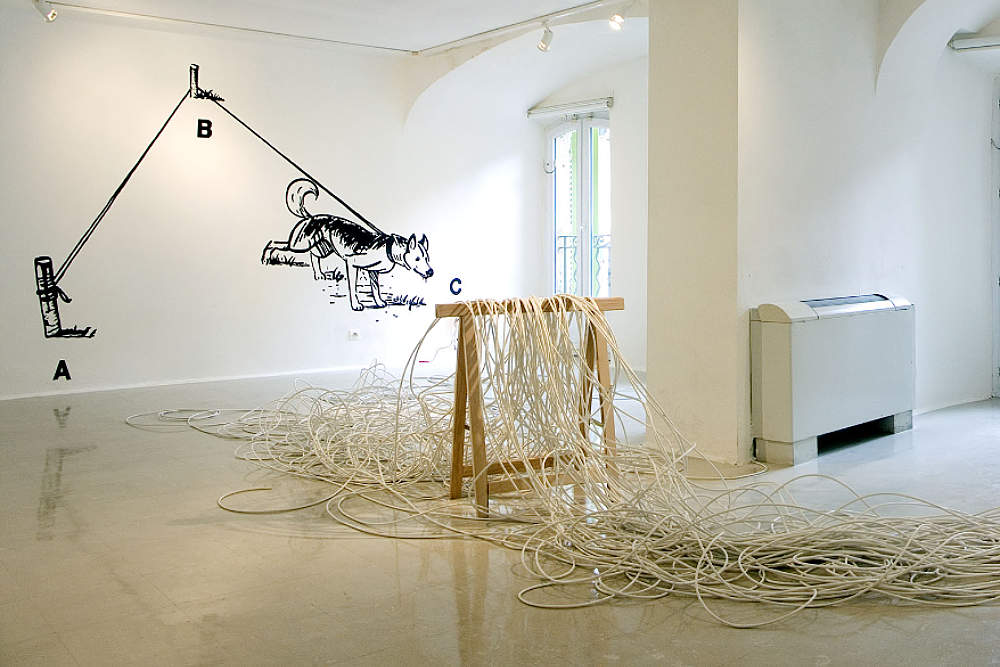 500 meters of silence is an installation concerned with un-communication. Fragmentation of the white aerial cables – vivisectioned, useless bodies – disables any form of transmission and imposes discontinuity by interrupting the flow of data. Yet it is precisely here that the formidable powers of words and images, saturating TV and computer screens, hertzian networks and optical fibers, are implicitly called to mind.

Many works from Jean Baudrillard to Marie-Josée Mondzain, Susan Sontag, Edward Said or Eric Michaud, have highlighted the strong selective and manipulative capacity of images used in propaganda, art, and publicity, and also the scandalous commonplace and indecent virtualization of violence and death through mediatization. We are constantly abused by information, truncated and falsified through multiple manipulations of which some are obviously voluntary, resulting from a purely political, economical, or cultural cynicism, whereas others would seem to arise from the distraction or incompetence of the broadcasters. Mounir Fatmi remarks: this “flow (…) conditions us and influences our faculties of judgment and our opinions”. [1] In 500 meters of silence the artist refers to Ivan Pavlov’s experiments on conditional reflexes with mural painting and a sound track. Our desires, through which we have the illusion of affirming our liberty, are in fact mainly suggested to us, just like with Pavlov’s dog. Our thoughts are largely inducted by a whole system that generates them and confounds our psychism, leaving us to believe in our capacity to choose and decide. Here for distanciation, deconstruction, and explicitation, Mounir Fatmi proposes disconnections. Thus, 500 meters of silence is a lock-chamber for salutary deconditioning, suited to imply that an image is always a “code to be deciphered”. [2]

The menace to intelligence and democracy is indeed not that the world is presently over-saturated with images and words all arch-connected via various kinds of networks and an uninterrupted flux of information; it is rather that this formidable mutation of communication systems favors demagogic and populist massification of knowledges and cultures. In order therefore to quit the confusion of misunderstandings, we must proceed to a critical analysis, interrogate the discourse, read the images, actualize conditioning ideologies, proceed to an archeology of knowledges and an epistemology of certainties. Hence, it is essential to try to find out “what is concealed in what is shown to us, the detail masking the essential, the close-up dissimulating the general plan”: the loss of jobs linked with good stock-exchange scores, the hidden costs of nuclear power, the profitability of traffic in weapons, drugs and organs, the veritable lobbying powers of any obedience…

Here, the installation confirms itself as a tool that is particularly well adapted to a contemporary practice carried by a desire for explicitation as underlined by Peter Sloterdijk. He establishes that this form of art reveals itself to be “the most powerful instrument at the disposal of contemporary art in consigning given situations as such to a space of observation.” [3] In his works, videos, mural paintings, sculptures, and installations, Mounir Fatmi is aiming at showing us the ideological, economical, political, sexual, and religious substructures of violence, racism, and integrism. Since his very first works, he insists on the necessity to read between the images and the lines, to interrogate any discourse on Truth, all revolutions, and any militant gnosis, the fury of the world and its appeasements.

One day or another, all has to be reconnected. As writes Georges Didi-Huberman on the image, this flux of information is indeed “both symptom (interruption of knowledge) and cognition (interruption of chaos)”. [4] Although inadequate, partial, and biased, it is nevertheless transmission, testimony, and memory against the eradication of reality through censorship, against the obliteration of exactions by the authors themselves, against negationism, against the silence of violence that constrains us to say nothing. So as not to become more alienating even than speech, the duration of silence must be limited. Let us say 500 meters…

Then, we have to receive again these innumerable signs, the worst and the best, the trustworthy and the counterfeit, the manipulator and the manipulated, the déjà-vu and the event, for the advent of the moment of critical analysis and symbiotic resistance, of explicitation of all this confusion and its causes, for the time of sense. For this, we have to create zones of democracy, places and times for words, exchange, where it is possible to debate without danger, accepting – to quote Sloterdijk once again – that life knows “a multifocal, multi-perspectivist, and heterarchic deployment (…) in a non-metaphysical and non-holistic definition”. [5] In his Manifest, Mounir Fatmi calls for “transparent flags” thereby suggesting to put an end to death-carrying ideologies in order to understand one another, get out of conditioning and obscurantism in order to live together in a pluralism of thought, arts, and beliefs. It will then be possible to “have the true experiences of seeing, understanding, and acting”. 500 meters of silence is a beautiful space for conversation.

In actual fact it is a matter of sorting out the context of ultra-liberalism, of the uninterrupted flux of enjoyment, in order also to finally understand, which desire really arises from the construction of the self, individuation enabling an encounter with the other. In the words of Stig Dagerman, the only veritable miracle is that of liberation “simply in the sudden discovery that no one person, no power, no human being has the right to demand something of me such that my desire to live be etiolated”. [6] 500 meters of silence is a beautiful space for inner dialogue.

(From the French: Helen Adkins)