Khaled Ramadan selected more than 40 video works by Arab artists for the show in Copenhagen. 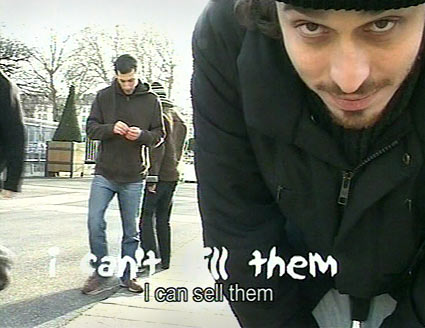 At a time of growing anxiety in Western societies of its Muslim citizens, and amidst much discomfort over the apparent reality of 'Eurabia', the 40 over video works by Arab artists playing at an art space in a former church in the heart of Copenhagen probably suggests that resistance to such invasions is futile.

Images overloaded in sun-seared primary colours and often over –saturated when set against a sparse Levant landscape and a rich soundtrack of piercing sirens, rumbling traffic, grieving mothers and boisterous children, the 'Coding:Decoding' exhibition may well be quarantined within the white walls of the Kunsthallen Nikolaj. Denmark's cool decorum remains intact.

And yet the multiple realities captured by these artists and presented as remixed mosaics, and the plurality of struggles against the toxic legacies of post-colonialism, Palestinian dispossession and recurring war, have also seeped out under the Nikolaj's ornate front doors.

The works belie the politically-induced paranoia of a monolithic Muslim/Arab mob forever rattling over the gates of Europe, despite leading Danish social democrats now joining once disreputable anti-immigrant demagogues at populist pulpits warning in their best-selling books of an allegedly Muslim-inspired apocalypse around the corner.

So perhaps Taysir Batniji's rhythmic footage of a bloody slab of mutton being chopped into shape on a butcher's block – intercut with snapshots of a briefly 'normal' Gaza and its school children, markets and stoic scars from the Intifada – makes a key point of the overall exhibition, simply if brutally.

White Europe isn't the only place seemingly under siege, for Gaza is too. But Gaza's siege results from a very real Israeli blockade following Hamas' electoral win, forcing the territory's implosion as food, money and hope run out. But unlike their Danish counterparts, the Palestinian populists are punished by the outside world. As Batniji's 'Gaza–journal intime' suggests in a suitably explicit metaphor, Palestinians themselves are all chopped up and cast out like another sliver of offal.

While the artists curated by Khaled Ramadan in 'Coding:Decoding' share the desire to deny the effacement of Arab memory and colonial betrayal, there are distinctly different approaches to unravelling and recasting the underlying nostalgia for a nationalist Arab resistance and a related ambivalence over the colonial legacies of secularism.

Whether these themes have fermented more in the Maghreb region of Algeria and westwards, or whether discomfited artists seduced by fragmented memories and lost communities in Beirut, Cairo and Palestine have been forced instead by September 11 and this year's Lebanon war to reboot their computers to run new Islamic screensavers remains to be seen.

The secular Arab nationalist project may finally be buried, bankrupted by the new populist resistance demonstrated by Hizbollah and Hamas and enhanced by Western antipathy to a new Iranian leadership. There are some hints and nods in the exhibition to these modes of resistance, but perhaps predictably many of these works suggest a faith grounded in a secular art world where exploring the celestial realm has been postponed in favour of capturing and (re)imagining the here and now.

That sort of transactional relationship, and finding humour in Lebanon's tense relationship with Israel, is explored in Mahmoud Hojeij's deceptively simple video of three young men horsing around a non-descript square on a cold, overcast European day. The uneasy bonhomie conjured up in 'We Will Win' between a pair of Israelis and a Lebanese youth is told in a series of asides to the viewer gazing through the camera, where the question of 'winning' an apparently intractable battle of wits on the square has less to do with trusting each others' national identities than with making the viewer complicit with their petty plots.

More poignant is Lina Khatib's documentation found in 'Quelle Revolution' of the so-called 'Cedar revolution', where the promise of a new prosperous Lebanon under the plutocrat Rafik Hariri swept up even artists cynical about the bribery and corruption linked with Hariri-linked election candidates. The millions of dollars that swept in to rebuild the 'Paris of the East' after nearly two decades of civil war can now seem like so many footnotes on the margins of Khatib's video screen, her vivid video captures of ebullient Beirutis uniting for a new Lebanon free from Syrian and Israeli influence (but not fickle globalised capital) eventually giving way to the brutal hangover of Hariri's assassination and Israel's attempts to bomb Lebanon "back to the Stone Age".

But for several minutes at least, Khatib's Lebanese indulge in flag-waving while crowding the stalls for campaign badges, wink at the slick commercial billboards, solemnly recall the civil war's victims, and savour the temporary pleasures of the perishable snacks offered.

As Curator Khaled Ramadan points out in an interview, "the current geo-politics and socio-cultural climate [in the Middle East] compels video artists to explain the complexities in their work". Video artists are finding themselves torn between the historical need to reclaim colonised Arab images and identities, he says, and the desire to articulate the uncertain aesthetics and more experimental outlooks of a fractious Arab diaspora increasingly united by its loathing of American and Israeli foreign policies.

Palestinian-Danish artist Larissa Sansour takes aim at these policies that have underpinned the building of the Israeli 'security' wall dividing her homeland. Returning to Bethlehem after years in exile, Sansour plays the role of a Mexican gunslinger in 'Bethlehem Bandolero', a six-minute swagger of a video that takes us through the biblical streets.

With her eyes peeking out from under a large red sombrero and her face veiled by her bandana, her pistol-toting tour of Bethlehem is shot like a typical 'spaghetti Western' complete with a lively soundtrack of generic surf-guitar music. Curious men, fascinated priests, children and even a cat make up her audience on the streets, all eventually folded into a kitsch kaleidoscope of images as we reach the climax of Sansour's duel with the wall. It's a sharp if quirky comment about the absurdity of the wall, as ridiculous as Clint Eastwood drawing his guns for peace at high noon.

While Sabah Naiem's montage of video and freeze-framed people on Cairo streets and subway seems an almost ornamental tribute to Egypt's heaving capital on the Nile, the work 'People of the City' compares modestly to previous showings, including at the Venice Biennale. By comparison, Rami Abdul Jabbar's 'Snow' is a warmly directed meditation on the transience of adolescence, featuring Arabic script transposed over well-shot scenes driven by a Japanese haiku set in much colder weather.

Yet it is the pastiche of the Hollywood Arab that lingers in the popular Western imagination, avers Jacqueline Salloum in her 9-minute work 'The Planet of the Arabs'. Her humourous deconstruction of over 30 American films and their relentless dehumanisation of the Middle Eastern 'other' chops up and spits out a narrative of prejudice starring Arnold Schwarzenegger, Michael J Fox and Chuck Norris, amongst others. Like Taysir Batniji's bloody mutton in Gaza, Western stereotypes can also be filleted in a similar style.

Part of the festival Images of the Middle East in Denmark

A letter from Copenhagen. Impressions about the Images of the Middle East Festival 2006.
Nafas