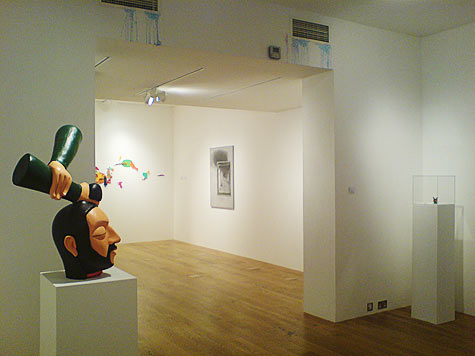 Now they have taken it 'beyond the page' with mixed media, installations and sculpture. They arrived on the international art circuit just as the pendulum was swinging away from messy beds and back towards painting and, according to respected Pakistani art critic, Salima Hashmi, the re-birth of the form coincided with 'a yearning (in Pakistan) for a narrative, a linking with tradition of some kind.'

Beyond the Page, a group exhibition at Manchester Art Gallery (MAG) and Asia House in London is the biggest show of New Miniaturist work staged in the UK. It brings together the work of eight artists and coincides with a new phase in the high-speed evolution of this promising young upwardly-mobile artistic form. After a fast but steady increase in international acclaim over the last 10 years, in August this year Shahzia Sikander won the $500,000 Macarthur 'genius' award in New York, while Rashid Rana and Muhammad Imran Qureshi were selected for the 2006 Singapore Biennale. Critics are already starting to worry the oleaginous attentions of the international art market will dull the artists' edge.

Not yet, judging by 'See Through', the large-scale site specific installation by Rashid Rana on the 20 metre-high glass doorway in the main atrium at MAG. From a distance of thirty feet, the Manchester streetscape visible behind the glass doorway, an imperious granite building face, is superimposed neatly on the glass – a pleasing visual pun. But the repetition is so uncanny and pleasing it draws you closer, till at ten feet you see it's comprised of hundreds of thousands of smaller square pictures or pixels, like individual dabs of paint. Step up close enough to kiss it and Urdu script on the minute dusty street signs is visible. On recognising photographs of inner city Lahore, I glowed smugly, a knee-jerk home-lust momentarily sated and a patriotic pride in the conspicuous virtuosity of my fellow countryman deploying a uniquely Pakistani art form. So what if I can't speak Urdu? Land is land, right? The Empire paints back and all that. British Pakistanis need all the reflected glory we can get these days.

But this is a knowing and deeply self-referential post-modern genre. Before Zahoor ul Akhlaq, (the father of contemporary miniaturism featured in the exhibition) began experimenting in the 1980s it had dwindled into a static craft, pretty pictures bought mostly by the bourgeosie for the feel-good reminder of the good old days. Contemporary miniaturists constantly worry this twee decorative inheritance, particularly Rana a student of Akhlaq's.

Sitting in heavy traffic in a creaky rickshaw in inner-city Lahore 2 days later, I realised that the joke was on me and Rana is sharper than I gave him credit for. Speeding past a new branch of Subs, I remembered his other large scale work, 'A day in the life of Landscape' in which he parodies the work of a well-known landscape painter who depicted romanticized versions of the bucolic Punjab hinterland using similar pixels of the smoggy, quotidian inner city Lahore. The same Lahore I was choking on now, a far cry from the mango trees and sugar cane fields of my mother's rose-tinted childhood memories, which in turn informed my own fantasy version of Pakistan. Now See Through felt like a comment on the myth of return and the cryogenically frozen Pakistan of ex-pats' dreams. My mother never told me about Café Zouk, the downtown hangout filled with trendy Lahorites in size 8 Diesel jeans and Marlboro light smoke.

Many of the works employ cunning strategies to resist exoticisation and steer the viewer away from simply gazing lustfully at the precise shapes, impossibly fine lines and devilishly intricate detail. Infinite Justice by Aisha Khalid is a tantalizing yielding sea of wafting cotton threads seemingly suspended serenely in mid-air. You'll want to run your fingers through them, but best not - the threads are attached to hundreds of sharp needles embedded in the richly coloured canvass. When you step away and watch it from the front a black target emerges in the middle of the soft hazy cloud, reminding you of the title of this series made in the immediate aftermath of September 11th. The soothing beauty of the form often seems to allow spikier meaning to emerge.

The large scale paintings created directly onto the gallery walls by Imran Qureshi snake out of doorways and implied cracks in the wall, like transgressive blue ivy. Qureshi uses a stylised version of basohli bushes in this work, which were typical of Pahari paintings, a school of miniaturism formed by painters from the Mughal court who sought refuge in the Punjabi hills with the dissolution of these courts. Qureshi re-deploys this rich signifier to striking effect by using the red, white and blue of the UK and US flags and titling the work, Politically Incorrect. But the surreptitious creeping creepy quality is a bit lost in Manchester Art Gallery as most of the work is effectively framed on the stand alone purpose built wall. In the London leg of the exhibition in Asia House the bushes curl out of air vents in the corners of the room and permeate the space by stealth mirroring the all-pervasiveness influence of the international policies of the world's only super-power, as well as invoking the macabre jihadi-glamour the remote conflict zones hold for some in the West.

But for all the challenging political content, I suspect most viewers will leave the exhibition stunned by the technical virtuosity and old school beauty of Passionate Beings in Flight II by Nusra Latif Qureshi and it is this image that adorns the publicity material and which will tempt most people in with the implication that 'all that is foreign can be known'. She draws on the company paintings, technical drawings commissioned from artisans by the East India company of 'indigenous types'for their records to produce an image which echoes the sumptuous rich detail of miniaturism as well as reflecting an unmistakably European aesthetic.

Hammad Nasar, curator of the show and a key character behind the many residencies, exhibitions and publications of contemporary Pakistani artist in the UK, says this is the first generation who are having international careers while living in Pakistan. The boom in the Indian economy and art market means Khalid and her husband Qureshi needn't leave Lahore to reach the wider world; they are represented by London gallery, Corvi-Mora. Beyond the Page attracting good reviews – 'Time Out' – the notoriously critical London magazine gives it 4 stars out of 6.

But there is plenty of admirers closer to home too. Nayab Shami, general manager of Croweaters gallery, tells me how she still kicks herself for not buying Qureshi's work when it was still affordable. These days young professionals are starting to collect the work of artists like Hasnat Mehmood, whose delicately decorated cigarette packets are on display in Beyond the Page.

Which is why I was so surprised when I visited the NCA miniaturism department to find current students relatively untouched by the 'Newness' of miniaturism and concentrating instead on sticking rigorously to the traditional techniques. Muhammad Imran Qureshi, who has taught in the department since graduating over ten years ago explained the deep resistance within the NCA to his approach. The traditionalist still have a firm grip on the department and see themselves as protecting a noble tradition from the corrupting and even diluting approaches of Qureshi and his peers.

The artists in this show have an international rather than diasporic sensibility. Salima Hashmi says the movement should not be likened to the post-colonial literature in English explosion led by Rushdie et al, a better parallel would be the growth of contemporary literature in Punjabi and Sindi. Beyond the Page is the work of a generation deeply rooted in specifically Pakistani concerns and artistic traditions but completely fluent in an international visual discourse and so pleasingly accessible for British audiences.

Freelance arts and feature-writer specialising in diversity and cultural poltics, based in the UK.

Beyond the Page
Contemporary Art from Pakistan