The videos "Ascent" and "Corner" by the artist from Uzbekistan in the context of his work. 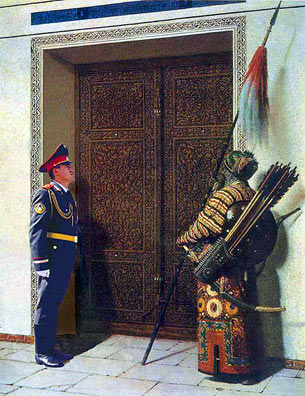 Vyacheslav Akhunov is a typical representative of a generation of artists from Central Asia who have experienced the stormy times of stagnation and disintegration in the Soviet Union, Perestroika, and the independence of post-soviet republics. He was born in a so-called "mixed" family, his mother being Russian, his father Usbek. These circumstances determine all his artistic production, in which he is on the search for the threshold where Asian mentality and European stylistics meet.

He carried out "true to life" experiments working as a stable boy and a laborer in a geological research expedition; he served in the army, where he observed that artists were distinctive people, who do not attend political education classes and can indulge in an attitude contrary to the regulations. That was the impulse for him to get involved in art. In his own words, he "poisoned" himself with art – entering Art school in Bishkek (former Frunse), then changing to the Art Academy in Moscow he finally returned to Fergana and participated in various art exhibitions. In one of these shows, he was discovered by Scharaf Raschidow, former general secretary of the communist party in Usbekistan, who in a gesture of generosity presented the young artist with living quarters in Tashkent. This enabled him to work in peace, but hindered him from treading the path of pure non-conformism. Some describe Akhunov’s aesthetic principles as late Surrealism; others are of the opinion that they rank with the Neo-underground movement. Akhunov’s work is so diverse in form that a strict classification is impossible. He works in various media, painting, installation, performance, actions, and lately video art. In his artistic credo there is no contempt of classical or traditional art and nothing said against officially involved art. Oriental in attitude, flexible and without any specific intention, he faces every style or society. He says: "I have always fled collectivism, that means a place where a collective is working on something. A creative person is always alone, just for himself. In my life, there have always been lots of alliances, right up until when I finally understood that all this was madness, all these artistic associations…"

Viktor Chukhovich’s statement on Akhunov’s work would seem appropriate when he says that it is about "politicized aesthetics". A clear example for this is his work "Cage for leaders" – an installation presenting a cage stuffed full of 250 polystyrene busts of Lenin. It is characteristic for Akhunov that other similar objects of his have usually only been shown in his studio. In the year 2000, "Cage for leaders" was removed from presentation in one of Tashkent’s international exhibitions.

A further typical work of his is a media piece in the artistic tradition of the Russian 19th century battlefield painter Vasili Vereshchagin, who had made a number of works on the theme of the war in Turkestan. With the virtuosity of an academic art school graduate, Akhunov depicts elegantly and convincingly a modern Usbek army guard standing at the Tamerlan Gates facing a Vereshchagin warrior of the guard of honor from times long past. The piece shrewdly ascertains that the apotheosis of authoritarian Asian power may easily be obliterated by a retouche with attributes such as the standardized modern uniform of an army guard. Then again, this apparel still stands for the same glorification today. The technical quality of a highly defined print assures that the work is timeless.

Akhunov is also unusually active in the field of literature. He has authored novels, essays, and poetry compendia, and is a regular at literature festivals and on literary websites.

Akhunov writes extensive texts, in which the protagonists cannot for the world understand if the world they are living in is real or imagined. As a consequence, they continuously fall into unreal situations. Some colleagues say this is "pure Existentialism" and an Usbek writer asked jokingly: "what are you planning to do, do you want to even overtake the Existentialists?"

Since the year 2000, Vyacheslav Akhunov has been investigating the possibilities of the new media, especially video art. Here he usually works with Sergey Tychina. In this tandem, Tychina takes on the role of the performer and Akhunov is cameraman. They work together on the fundamental message of a particular piece and complement each other organically on various other tasks.

The video-performances "Ascent" and "Corner", both 2004, are programmatic works from this period. Both pieces can be described as video-metaphors that are distinctive for the artistic work of Akhunov, who is considered to be one of the outstanding figures in Central Asia’s art scene.

"Ascent" is the direct transfer of the idea of a multi-layered evolution; the video-performance focusing the spiritual path of man enables us to participate in Sergey Tychina’s ascent of a medieval tower. Together with the artist, the viewer looks up but cannot see far, the visibility being blocked by the spiral construction of the stairs. We are right there with him when he goes up stair-by-stair, when his breath gets shorter, and when he rests, before relentlessly continuing the ascent. Whenever a narrow slot opens up in the brick wall, we get a short glance at the parched earth surrounding the tower, and then it goes on, further and further… Once on the platform at the top of the tower, we conclusively understand with the artist that even if we are right at the top, everything in this world is correlated in mutual support. The video demonstrates a mix of various cultural vectors – and existential motifs – from Akhunov’s artistic practice: Sufi meditation and medieval Eastern poetics. During the whole climb, we perceive not only the physical effort of Tychina, but also Akhunov’s heavy breathing, as he goes up the stairs together with his colleague, with the camera in hand. Once at the top of the tower, the ascent is shown again virtually on a laptop screen and one is reminded anew of the exertion and willpower. Then the image zooms back into the screen and the ascent in the "real" scenery begins once again from the start, just like in real life, where we are forced to go through difficulties over and over again.

The work "Corner" is somewhat the inverse of this idea. Here, the ethic evaluation of the individual position, with the full specter of personal values and thoughts, dominates. The protagonist – Sergey Tychina, now wearing Muslim headdress, recites a namas (prayer) in various places. For this, he does not turn towards Mekka as required by the rules of Islam, but goes close up into various corners, thereby completely focusing on himself. The corner becomes an iconographical motif of a sacred place, where spiritual quest and reality cross. Should it be a mosque, a museum, or an office, the type of building or space makes no difference.

Both pieces include exotic elements from Central Asia: Muslim attributes, a Medresa (legal and theological place of education), a cupola, buildings made of clay bricks, an Usbek shirt and the protagonist’s headdress are merely attributes identifiying the authors. However local the color, the addressed themes and problems withhold their universal significance.

Knowing Vyacheslav Akhunov personally, one has no doubts that he is a man of the Orient. He is marked by the thoughtful, hedonistic charisma of a poet, philosopher, glutton, and Don Juan. Any attempt to get to the bottom of the possible existence of contemporary art in post-soviet Usbekistan, he will counter with a quote from one of his interviews: "You are sitting somewhere on the Chilanzar** with young artists, actors, poets, or maybe only with people from Boheme circles and you are slicing the rich Tashkent pizza with cheese, coriander, and root vegetables. Meat is on the grill and you are dreaming of the forgotten taste of port wine no. 53 with fish in tomato sauce. And you are playing like when you were young, laughing, telling strange stories and you feel that your snow-white beard exists outside the gravity of youth. That is unbelievably edifying."