New media from the Middle East & South-East Asia at the transmediale Festival in Berlin. 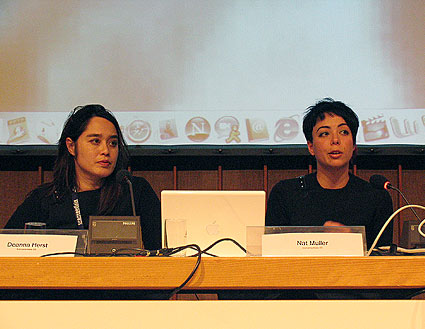 At this year’s transmediale, the international festival for media art in Berlin, Deanna Herst and Nat Muller from the Netherlands presented their curatorial, research project "Xeno_Tech". In this context there was an event put forward as an interim report in conjunction with the transmediale conference program, including a screening of selected videos and films.

One could read about the project’s conceptual approach in the transmediale program booklet: "Technology and media – whether used for medical, military or information purposes – have become the symbols of our present and future, as well as indicative of our prowess, progress, and civilization. In other words, the control over technology and media (their production, dissemination, and usage) functions as an index of power. What happens when Eastern Europe, the Middle East, and South-East Asia develop their own understanding of these technologies? Does this produce a cultural break and an identity crisis within a supposedly Western-dominated culture of technology?

Deanna Herst and Nat Muller invited three guests to the podium discussion: Güven Incirlioglu of the online collective X-Urban from Istanbul [1]; Lea Mauas, born in Argentina, and who together with Diego Rotman forms the Jerusalem-based group Sala-Manca [2], and Tien Wei Woo from Singapore, known in collaboration with Charles Lim Young as the group Tsunamii [3].

The curators and artists spoke at length about their projects and experiences, and most of this was very engaging. But an exchange of opinions never really occurred, whether among the podium guests or the large turnout in the audience. As a result, the theories assembled under the already ambivalent title of "Xeno_Tech" remained unchallenged, even though there were more than enough starting points for a debate.

For the evening screening, Deanna Herst and Nat Muller selected videos or films by artists from Israel, Palestine, India, and Indonesia. One of their main criteria was that the works "analyze, reinvent, and shed a different light on the image of ‘the other’." Here, too, one was inclined to ask what was meant by this. It would have been important to know from which perspective the curators defined "the other," since what was "the other" for them could have been "oneself" for at least some of the artists, in which case the aforementioned selecting criteria would no longer apply.