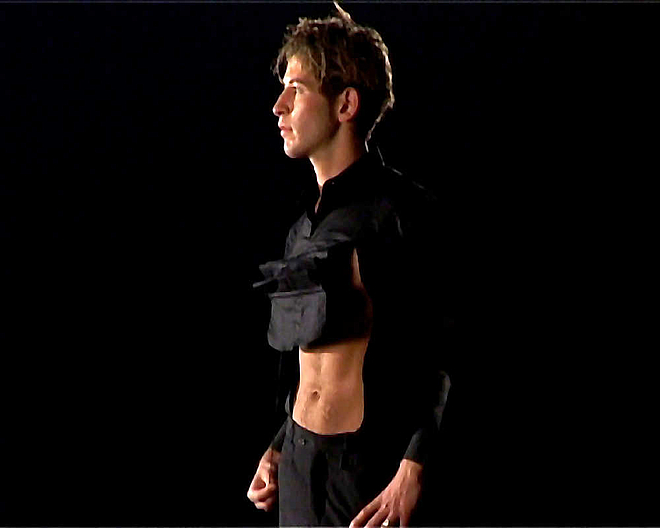 Chic Point is a seven minute video that ponders, imagines, and interrogates "fashion for Israeli checkpoints." Set to the backdrop of a heavy rhythmic beat, men model one design after another in an exploration of form and content. Zippers, weaved nets, hoods, and buttons serve the unifying theme of exposed flesh. Body parts - lower backs, chests, abdomens - peek through holes, gaps, and splits woven into readymade silk and cotton t-shirts, robes, and shirts. Raw materials and standard clothes are transformed into pieces that follow normative fashion standards while calling them into question.

As the sights and sounds of the fast paced catwalk dim to a close, the viewer is transported to the West Bank and Gaza. A series of stills taken from the years 2000 to 2003 display Palestinian men traversing the profoundly violent but highly common Israeli checkpoint. One man after another lifts shirts, robes, and jackets. Some kneel shirtless, others naked, with guns poised at their exposed flesh. Men in Jenin, Ramallah, Bethlehem, Kalandiya, Jerusalem, Hebron, Nablus, and Gaza City wrangle with the Israeli state’s security apparatus.

Chic Point brings these two locations together in a reflection on politics, power, aesthetics, the body, humiliation, surveillance, and chosen as opposed to forced nudity. The world of high fashion is an interlocutor for the stark reality of imposed closure. The body of the Palestinian, today commonly understood by the Israeli state as a dangerous weapon, is brought to the viewer’s eye in the flesh. Chic Point bares the loaded politics of the gaze as it documents the thousands of moments in which Palestinians are daily forced to nude themselves in the face of interrogation and humiliation, as they attempt to move through the intricate and constantly expanding network of Israeli checkpoints.

Text by the artist.