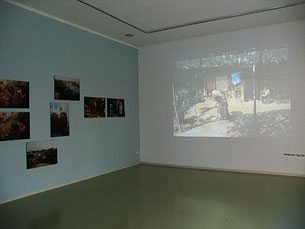 Dilliwale Kaun / Baharwale Kaun - Who are the citizen of Delhi / Who are the outsiders. 2001 - 2005
Photos and video
In her poetic photo reportages, Farhana Syeda documents the problems of Muslim migrants from Bangladesh in the slums of Delhi and Calcutta. She responds to an international, based photo journalism that is thirsting for sensational images of starvation and catastrophes in her home country Bangladesh. She created the "Dilliwale Project", which deals with the different forms of migration, hierarchies and urban fragmentation. "Dilliwale Kaun" means "lawful citizen of Delhi", hence exactly that, which the illegal, poor Muslim immigrant from Bangladesh will never be. The reportage conveys the impression of uprooting, exclusion, social barriers and religious refuge.